The just released State of North America’s Birds report is grim reading.  Based on a comprehensive evaluation of species population size and trends, ranges and threat severity the assessment reaches a stark conclusion... 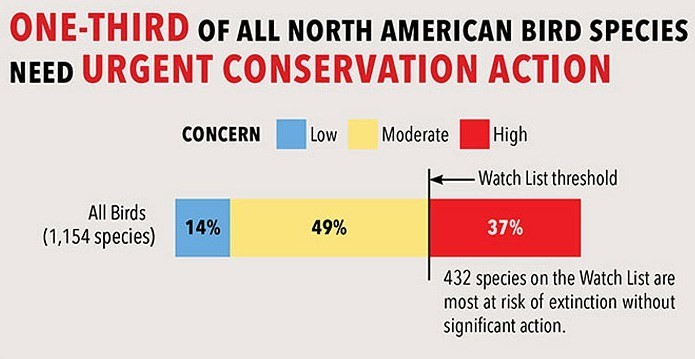 Graphic from the State of North American Birds report.

A billion birds have disappeared from North America since 1970, and a third of bird species across the continent are threatened with extinction…

The first State of North America's Birds report finds that of 1,154 bird species that live in and migrate among Canada, the U.S. and Mexico, 432 are of "high concern" due to low or declining populations, shrinking ranges and threats such as human-caused habitat loss, invasive predators and climate change.

Complied by experts from Mexico, the United States and Canada, the report breaks down species risk in 10 habitats. Even when these "high concern" species are protected by international agreements and or endangered species protection they are placed at risk by both human encroachment and the impact of climate change  on breeding grounds and food sources.

Most threatened, with more than half the species of "high concern" are ocean birds such as northern gannets, tropical and sub-tropical birds, including many that breed in Canada and the U.S., but winter in Mexico.

There are also steep declines in coastal shorebirds like semipalmated and western sandpipers and red knots, which have lost 90 per cent of their population; grassland birds such as the greater sage grouse, Sprague's pipit and chestnut-collared longspur; and aridland birds.

Species with long migration paths have sustained population losses of 70% over the last half century.

...species in coastal, grassland, and aridland habitats are declining steeply. In particular, long-distance migratory shorebirds and species that migrate from the Great Plains to Mexico’s Chihuahuan grasslands have lost, on average, almost 70% of their continental populations...

Among the bad news, the report highlights some successes as examples of cooperation between governments and conservation organizations resulting in stable or growing species populations. However, efforts that have sustained waterfowl populations may not apply to many of the most threatened species.

We have models that work, but do we have the will to implement them?  None of this is easy and the obstacles are immense.  We have a choice.

On the centennial of the Canada/U.S. Migratory Bird Treaty and the 80th anniversary of the Mexico/U.S. bird treaty, the governments and citizens of our three countries must develop a vision for migratory bird conservation in this century.

If we fail the sky will be empty in the next century.

Also posted at Just Save One.