The warming of the world’s climate has reached a fever pitch in recent years, causing records to fall like dominoes. In 2015, the planet saw a number of such records set, from the hottest global temperature measured to the largest annual increase in carbon dioxide...

Those records — along with numerous other indicators of the considerable change wrought on land, in the oceans and air, and to ecosystems — are detailed in the annual State of the Climate Report released Tuesday by the U.S. National Oceanic and Atmospheric Administration.

The report, now in its 26th year and published as a special edition of the journal Bulletin of the American Meteorological Society, was put together by 456 authors in 62 countries and provides a checkup of Earth’s health.

“We have to understand how the planet is changing and varying . . . in order to understand where we may be going in the future,” Thomas Karl, director of NOAA’s National Centers for Environmental Information, said during a press teleconference.

While a strong El Niño provided a boost to global temperatures last year, the main driver of the planet’s temperature surge, as well as other climate trends, is the warming caused by the buildup of greenhouse gases in the atmosphere.

And just as many of the records of 2015 broke those set only one year earlier, 2016 has broken or is poised to break several of 2015’s records:

The average temperature for the world in 2015 was record warm in all four major datasets, which are run independently by different U.S. and international agencies. The year beat out 2014 by 0.2°F (0.1°C) — the highest margin for such a record since 1998.

From the perspective of how much temperatures have risen since preindustrial times, 2015 was more than 1°C (1.8°F) above temperatures from the mid- to late-19th century. Nations have pledged to limit warming to 2°C above preindustrial temperatures by the end of this century, with some discussion of tightening that cap to 1.5°C.

Global temperatures have continued to soar in 2016, which for the first half of the year is ahead of 2015 by a long shot and has nudged the planet even closer to the 1.5°C benchmark.

Whether 2016 takes the title of hottest year or not depends on how the second half of the year plays out, with a La Niña event possibly forming in the wake of the exceptionally strong El Niño that held sway in 2015 and early 2016. La Niñas have a cooling effect on global temperatures. The latest model forecasts are less confident that a La Niña will form, which would mean 2016 has a better chance of besting 2015.

“It’s quite possible that 2016 will set a new global temperature record,” Jessica Blunden, a NOAA climatologist and lead author of the report, said.

Greenhouse gas levels — the driver behind the steady warming of the planet — also set records in 2015.

The annual average of carbon dioxide levels at the Mauna Loa Observatory in Hawaii, which keeps the longest-running record of atmospheric CO2, was 400.8 parts per million. That was the first time the measurement was over 400 ppm for the year. While that benchmark is somewhat symbolic, it shows how far those levels have risen since preindustrial times, when CO2 measured about 280 ppm. 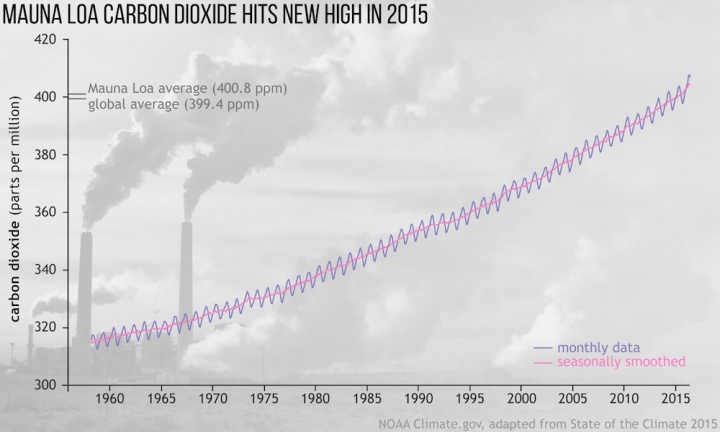 The rise of carbon dioxide levels in the atmosphere.
Click image to enlarge. Credit: NOAA

The year also saw the biggest year-over-year increase on record at Mauna Loa, 3.1 ppm. While 2016 is only halfway over, it is slightly ahead of 2015 by this measure.

The global CO2 average for 2015 was just under 400 ppm, “which means that 2016 is easily going to surpass this milestone,” Blunden said. In fact, one of the last places on Earth that had yet to cross that mark, the South Pole, finally did so this year.

One of the key drivers of 2015’s record heat was the global oceans, which take up 90 percent of the excess heat trapped by the atmosphere.

Sea surface temperatures and the heat contained in the upper portion of the oceans both set global records, surpassing those set in 2014. 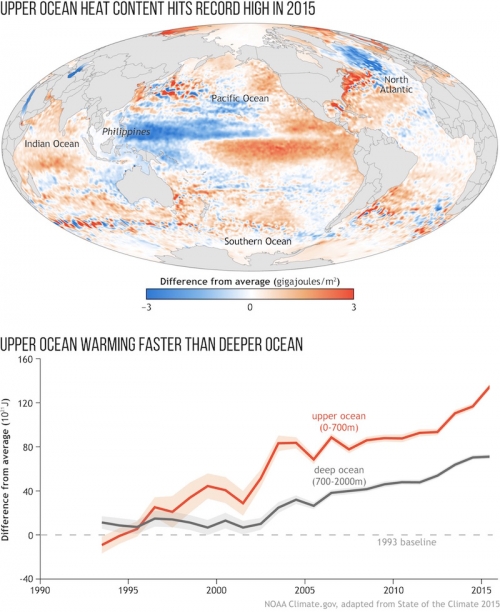 Because water expands as it warms, that heat also meant that sea surface heights were record high, measuring about 2.75 inches higher than at the beginning of the satellite altimeter record in 1993. Rising seas are one of the key concerns of global warming, as they stand to inundate coastal areas that are currently home to millions.

One of the planet’s hotspots has been the outsized warming in the Arctic, which is seeing a temperature rise double that of the global average.

This rapid warming has caused substantial changes, perhaps most notably to the ice that covers the Arctic Ocean. Loss of this ice has ramifications for polar ecosystems, as well as potentially to weather patterns in Europe, Asia, and North America..

Arctic sea ice reaches its peak at the end of the winter; last year that winter peak set a record low. That record has already been beaten this year.

May and June this year also saw record low sea ice levels, though the decline eased off in July. Still, sea ice is far below the long-term average and stands to rank among the lowest years on record at its end-of-summer nadir.

This spate of records won’t necessarily continue over the next few years, particularly if a La Niña does materialize. Even with a long-term background trend of rising temperatures, other climate factors contribute to yearly ups and downs. But as long as greenhouse gases continue to build up in the atmosphere unabated, the scales are heavily weighted toward more record heat, ever lower sea ice levels and ever higher seas.