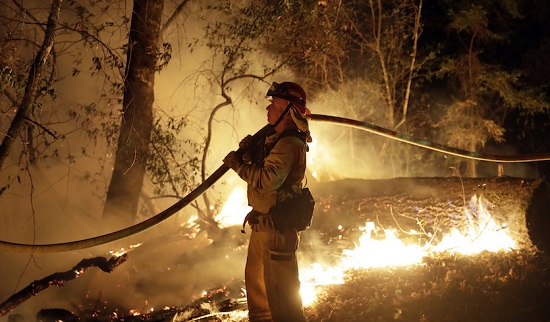 A record-breaking heat wave will build over Southern California over the weekend and peak on Tuesday, bringing triple-digit temperatures that could set marks for the hottest temperatures ever recorded so late in the year in the Los Angeles area. Accompanying the heat will be the notorious Santa Ana winds, which will bring a multi-day period of critical fire danger, Saturday through Tuesday.

According to NOAA, the hottest temperatures ever recorded after October 23 in Southern California (along with the Weather Underground forecast for Tuesday) were:

The heat wave and Santa Ana winds will be caused by a large near-record-strength dome of high pressure expected to settle in over the Great Basin, a few hundred miles northeast of Los Angeles. The difference in pressure between this high-pressure system and lower pressure over Southern California will drive gusty northeast winds over Southern California. Since these winds will originate over desert areas, they will be hot and dry. As the air descends from the mountains to the coast, the air will get hotter and drier, due to adiabatic compression—the process whereby the pressure on a parcel of air increases as it descends, decreasing its volume, and thus increasing its temperature as work is done on it.