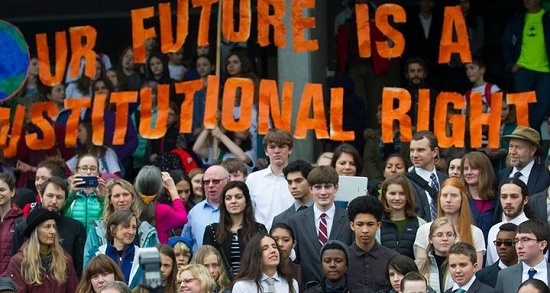 On Monday, before a panel of three federal judges, a group of young Americans will argue that they should be able to take the government to trial next February for failing to take adequate action against global climate change. A Justice Department attorney will argue against them...

Kids across America would be smart to send their good vibes to California this weekend. More specifically, they should focus on San Francisco and even more specifically on the Ninth Circuit Court of Appeals.

While that may be a strange place for kids to think about, the quality of their lives in the years ahead is hanging in the balance. Another bunch of kids and young adults will battle a lawyer from the federal government in front of the Court’s three-judge panel Monday to argue that President Trump must do something about global climate change. The kids went to court because young people, present and future, will suffer most from the dangerous impacts of global warming, much worse than the wildfires, floods, hurricanes, droughts and rising seas we see today.

The stakes are big. In their lawsuit, Juliana v. United States, the youngsters charge that the government is contributing to climate change by doing things like allowing coal and oil to be produced on public lands. They argue that a climate system capable of sustaining human life must be protected by the government as a public trust. But their most important argument – one that could take their case all the way to the U.S. Supreme Court – is that the federal government’s failure to do enough about global warming will damage the planet so profoundly that it violates children’s constitutional rights to life and liberty.