2017 WAS THE HOTTEST YEAR ON RECORD WITHOUT AN EL NIÑO, THANKS TO GLOBAL WARMING... 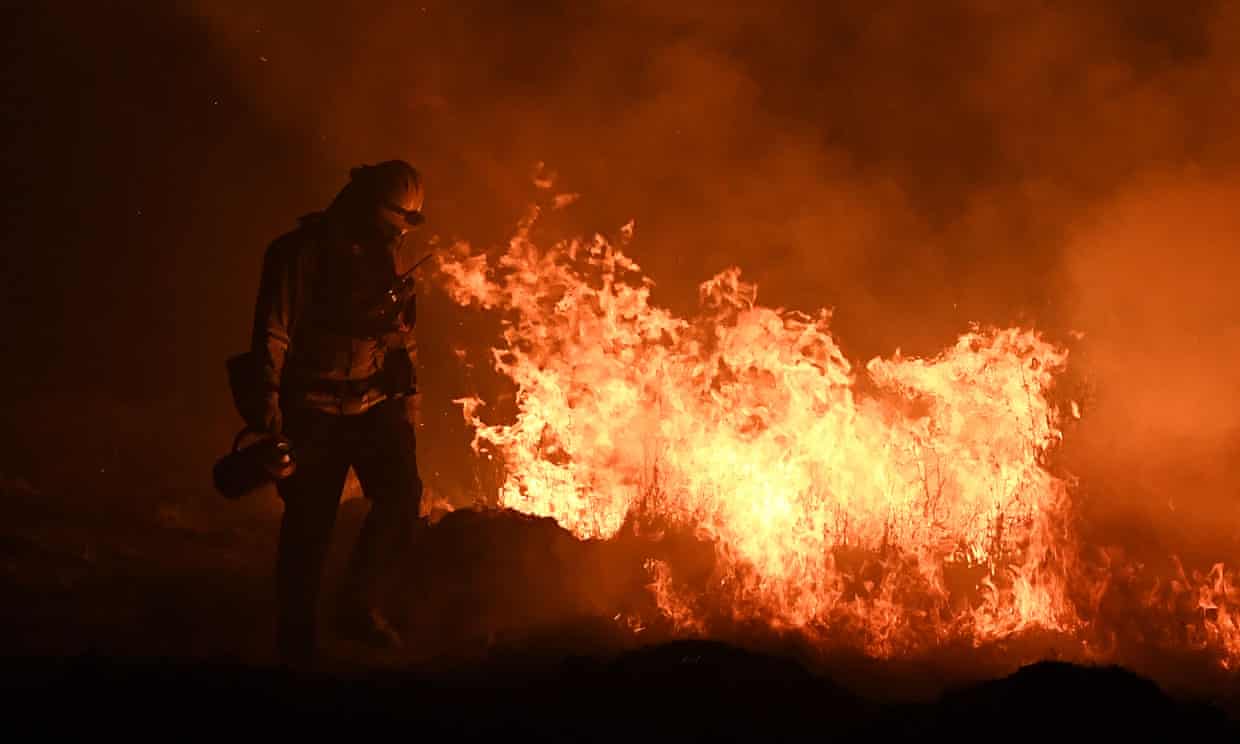 Firefighters lighting backfires as they try to contain the Thomas wildfire in Ojai, California on on December 09, 2017. Photograph: Mark Ralston/AFP/Getty Images

2017 was the second-hottest year on record according to Nasa data, and was the hottest year without the short-term warming influence of an El Niño event:

For comparison, the neutral El Niño conditions and the level of solar activity in 1972 were quite similar to those in 2017. 45 years later, the latter was 0.9°C hotter than the former. For each type of year – La Niña, El Niño, and neutral – the global surface warming trend between 1964 and 2017 is 0.17–0.18°C per decade, which is consistent with climate model predictions. 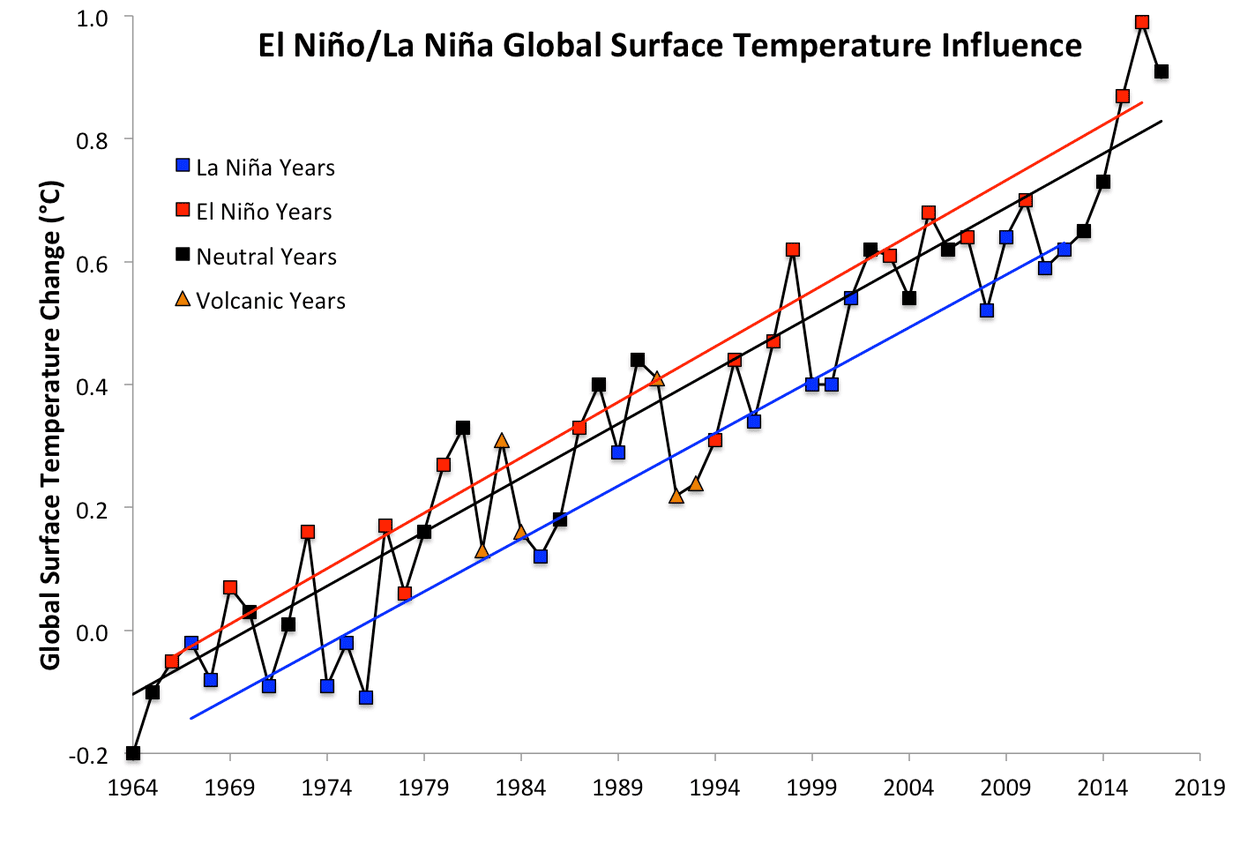 It’s déjà vu all over again

I’ve been writing for the Guardian for almost 5 years now, and every year I’ve had to write a similar headline or two:

Those early years were the height of the denier frenzy about the mythical global warming ‘hiatus.’ At the time, John Abraham and I frequently wrote pieces pointing out that while various factors were temporarily dampening global surface warming, the oceans (which absorb over 90% of the excess heat from the increased greenhouse effect) continued warming rapidly.

It was only a matter of time until short-term effects stopped holding back the rise of Earth’s surface temperatures. That’s now happened, and as a result we’re seeing unleashed global warming causing record temperatures year after year. In fact, in February 2014 I wrote about a study that predicted this would happen:

the [ocean] heat uptake is by no means permanent: when the trade wind strength returns to normal - as it inevitably will - our research suggests heat will quickly accumulate in the atmosphere. So global temperatures look set to rise rapidly out of the hiatus, returning to the levels projected within as little as a decade.

Temperatures have in fact risen so quickly, it appears to have taken just a few years for that prediction to come true and for the denier focus on the short-term surface warming slowdown to look quite foolish.

Speaking of climate denial, on the 362nd day of the hottest year on record without an El Niño, the US president tweeted this:

Trump also began the process of withdrawing the US from the Paris Climate Agreement in 2017, leaving America as the only country in the world denying the urgent need to address global warming. Fortunately, every other nation is taking action to mitigate this existential threat, but there’s a shocking gap between reality and the ‘fake news’ beliefs of arguably the most powerful man in the world.

America was also battered by climate-fueled extreme weather events in 2017. Research has already shown that global warming boosted Hurricane Harvey’s record rainfall (and associated flooding) by about 38%. California’s record wildfire season was similarly fueled by the state’s hot summer. The southwestern states were cooked by record hot summer temperatures this year, and global warming is making droughts in America and Europe worse. America was hit by 15 billion-dollar weather and climate disasters in 2017, and it will likely be the costliest such year on record once all of the hurricane damages are tallied. 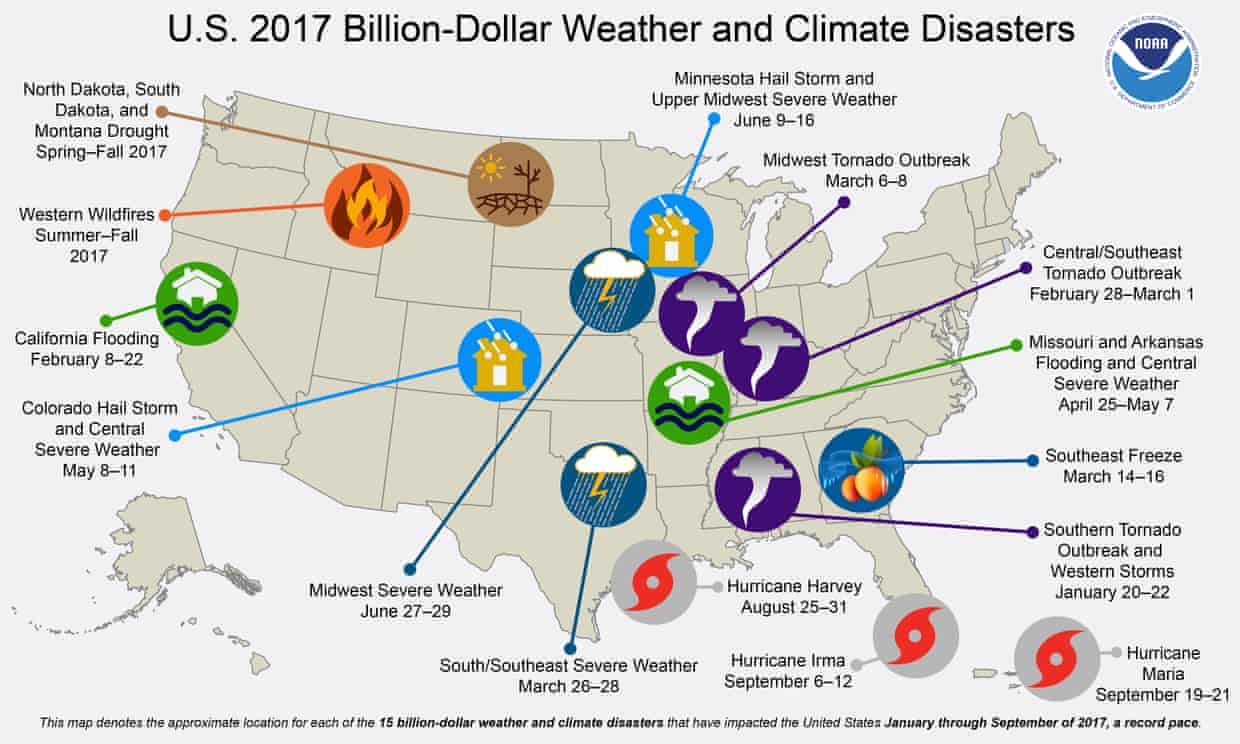 Billion-dollar weather and climate disasters in the US in 2017. Illustration: National Oceanic and Atmospheric Administration