2017 WAS THE HOTTEST YEAR ON RECORD WITHOUT EL NIÑO BOOST... 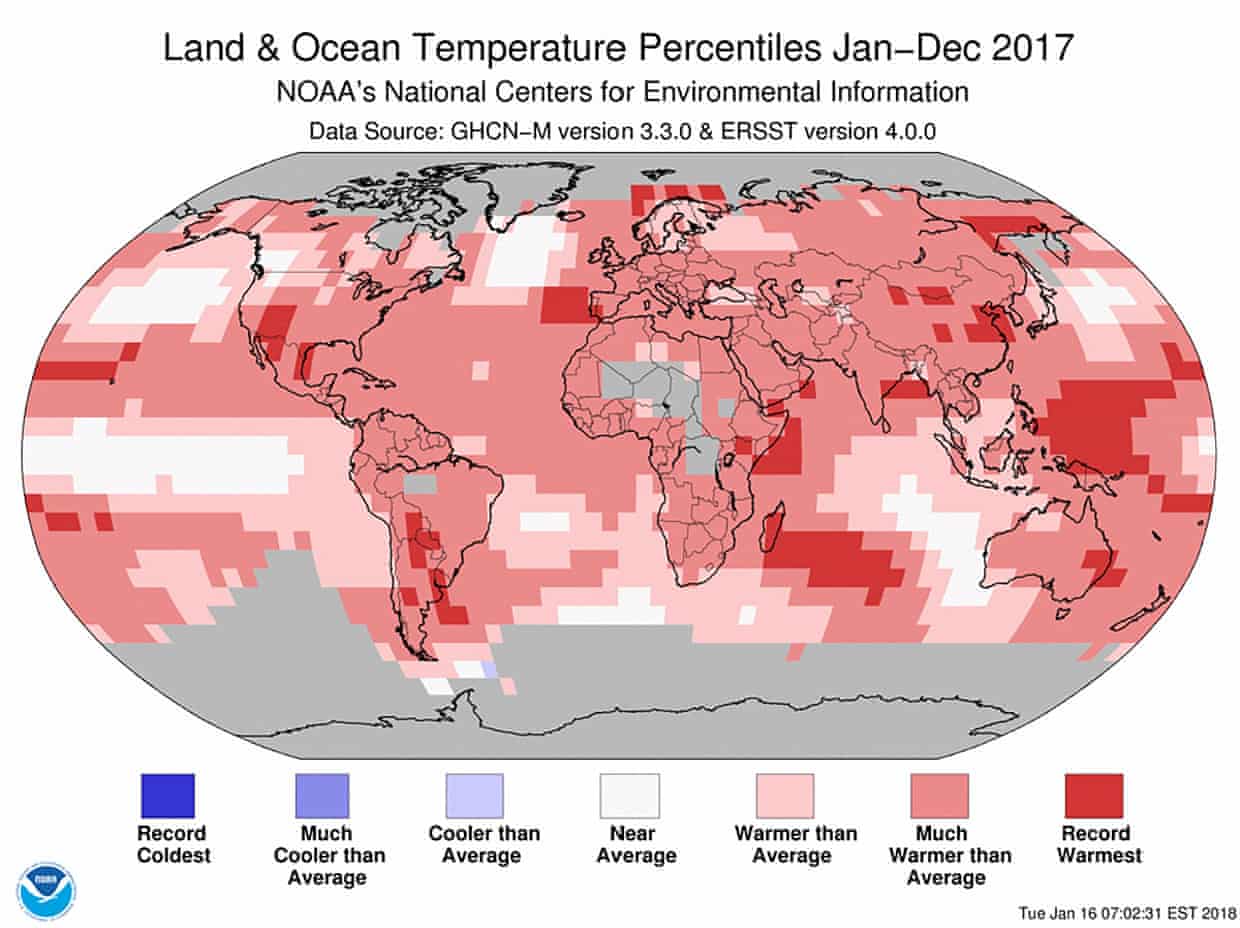 Data shows the year was also one of the hottest three ever recorded, with scientists warning that the ‘climate tide is rising fast’...

2017 was the hottest year since global records began that was not given an additional boost by the natural climate cycle El Niño, according to new data. Even without an El Niño, the year was still exceptionally hot, being one of the top three ever recorded.

The three main global temperature records show the global surface temperature in 2017 was 1C above levels seen in pre-industrial times, with scientists certain that humanity’s fossil fuel-burning is to blame.

The data, published on Thursday, means the last three years have been the hottest trio ever seen, with 2017 ranking second or third depending on the small differences between the temperature records. Furthermore, 17 of the 18 hottest years recorded since 1850 have occurred since 2000.

2017 also saw extreme weather events strike across the world, from hurricanes in the US and Caribbean to heatwaves in Australia and devastating floods in Asia. Many of these events have been shown to have been made much more likely by the heat resulting from global warming. 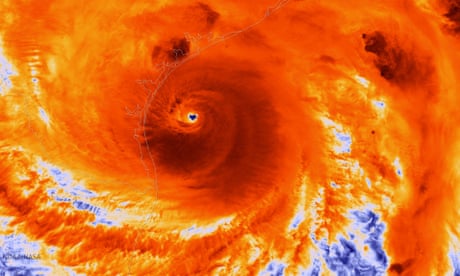 Scientists from across the globe warned that the limit of 1.5C of warming, set as a goal by the international Paris climate change treaty, was being approached very rapidly and that it was more urgent than ever to slash emissions to avoid the worst impacts.

The three global temperature records are compiled by the UK’s Met Office and Nasa and Noaa in the United States. The Met Office said the average temperature in 2017 was 0.99C above that seen from 1850-1900, despite the Pacific Ocean moving into its cooler La Niña phase.

2017 was the warmest year on record without an El Niño 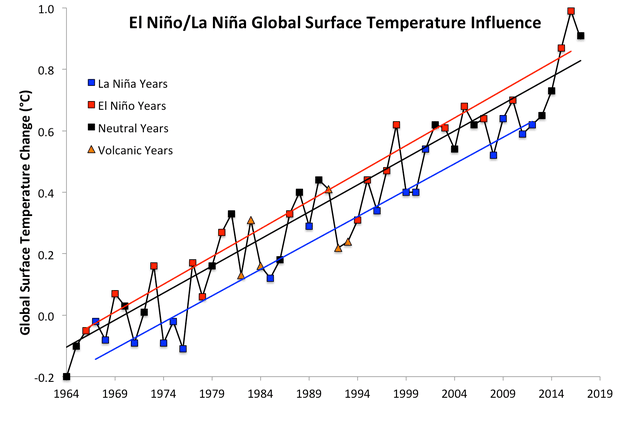 “While climate change deniers continue to bury their heads in the sand, global warming continues unabated,” said Prof Michael Mann, at Pennsylvania State University in the US. “And the impacts of that warming – unprecedented wildfires, superstorms and floods – are now plain for all to see. There has never been greater urgency.”

In December, the US president, Donald Trump, suggested cold weather in the eastern US undermined the evidence of climate change, a statement called “phenomenally dumb“ by climate scientist Dr Sarah Myhre.

Scientists said that the slight drop in global temperature in 2017 was unsurprising and that huge levels of carbon emissions are still being pumped out. “Global temperatures will continue to bob up and down from year to year, but the climate tide beneath them is rising fast,” said Prof David Reay, at the University of Edinburgh in the UK.

“Despite our best efforts so far, global warming continues apace,” said Prof Martin Siegert, at Imperial College London. “This is yet another wake-up call to develop a zero carbon economy before it’s too late.”

Dr Dann Mitchell, at the University of Bristol, said: “We are getting ever closer to the Paris agreement target of 1.5C which we are so desperately trying to avoid.”

Prof Stefan Rahmstorf said there had been a very significant increase in global temperature since the major El Niño seen in 1998: “In just 18 years, our greenhouse gas emissions have pushed up global temperature by a full 0.4C. At this rate the Paris goal of 1.5C will already be crossed in under two decades.”

In Australia, the Climate Council chief executive, Amanda McKenzie, said: “The fingerprints of climate change were seen with extreme weather events across Australia in 2017. This data is yet another warning to the government to urgently slash Australia’s rising greenhouse gas levels in a bid to protect Australians from escalating extreme weather events.”

The temperature data is all compiled using many thousands of measurements from all continents and all oceans. Small differences between them largely result from how temperatures for the fast-warming but data-sparse polar regions are calculated.

The El Niño event in 2015-16 raised the annual average temperature for 2016 by 0.2C, but most scientists agree that both 2016 and 2015 would have been record hot years even without the El Niño. The 2017 global temperature was accurately predicted by the Met Office a year before, adding to confidence that scientists have a good understanding of the climate system.