This year will almost certainly rank as one of the planet's top five warmest years on record, according to new data from the National Oceanic and Atmospheric Administration (NOAA) and NASA. In fact, the top NASA climate scientist reported Monday that 2017 is likely to be the second-warmest year on record, behind 2016, which in turn displaced 2015 from the top spot...

NOAA, on the other hand, predicts that, barring an unforeseen, large-scale cold snap, this year will rank as the third-warmest year in its database. These two science agencies use different methods to rank years, but base their information on similar underlying data comprised of thousands of surface weather stations and buoys at sea.

According to NASA climate scientist Gavin Schmidt, who heads up the agency's Goddard Institute for Space Studies in New York, we're on track for the second-warmest year, with at least a 98 percent probability. 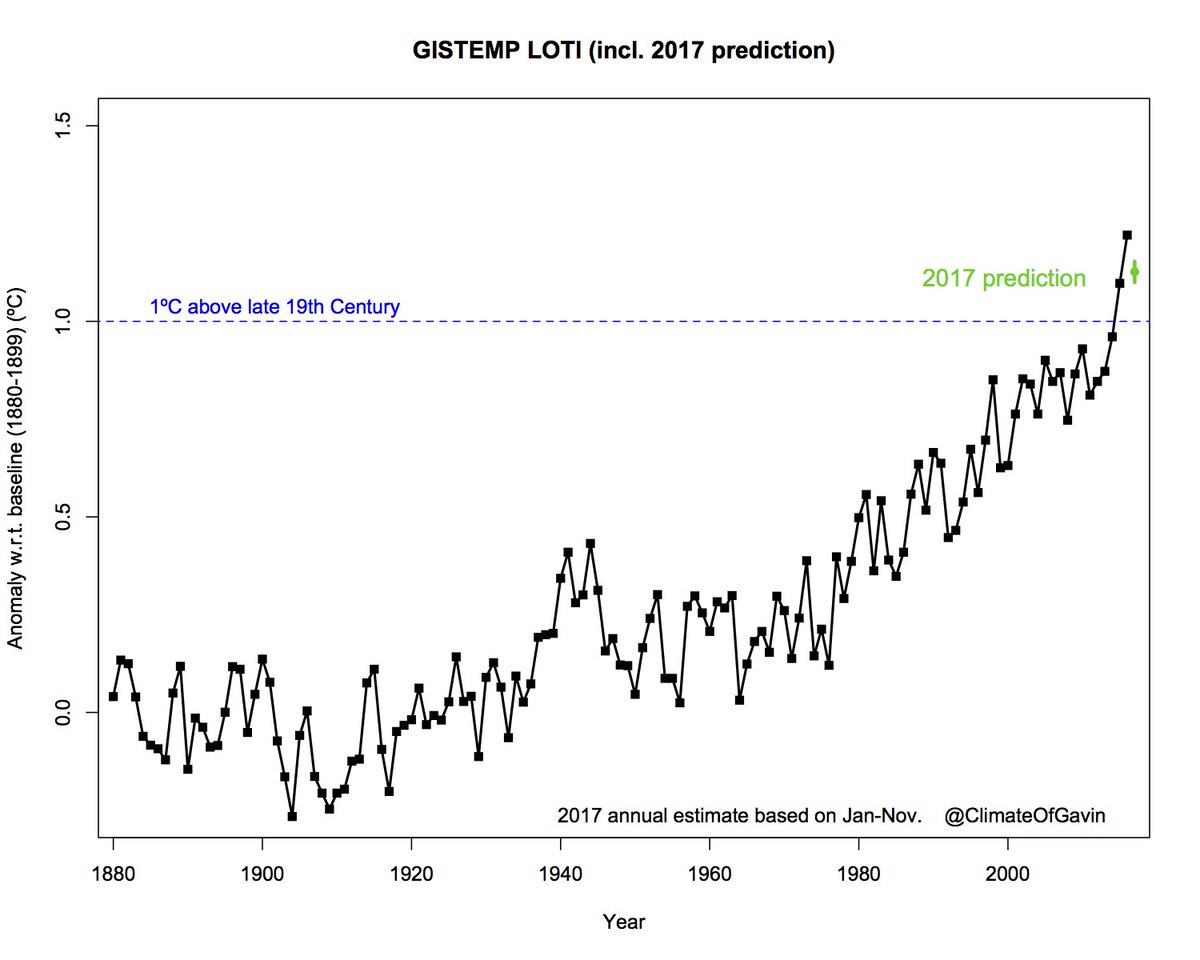 GISTEMP 2017 annual mean will almost certainly (>98%) be the second warmest on record.

NOAA found the year is tracking toward the third-warmest year since reliable thermometer records began in 1880, according to a statement from the agency. The warmest year in NOAA's database was also 2016, when global warming combined with a strong El Niño event to push global average surface temperatures to new heights. El Niño events are characterized by milder than average ocean temperatures in the tropical Pacific Ocean, which can trigger a chain reaction of events that alter weather patterns worldwide. These climate events also add heat to the ocean and atmosphere.

Even in the absence of El Niño, though, 2017 managed to stay incredibly warm, as far as average surface temperatures go. According to NOAA, the year-to-date has had a global average temperature anomaly of 0.84 degrees Celsius, or 1.51 degrees Fahrenheit, above the 20th-century average.

Although a La Niña event is now underway, featuring cooler-than-average seas in the tropical Pacific Ocean, global average temperatures are in rare territory. Over time, global warming has caused both El Niño and La Niña years to become milder, making it more and more difficult to have a cooler-than-average year.

This past year saw a host of noteworthy extreme weather and climate events, from the ongoing California wildfires to the devastating Atlantic Hurricane Season. In addition, a massive iceberg about the size of Delaware broke off the Larsen C Ice Shelf in Antarctica. While the cleaving off of that iceberg is not directly attributable to global warming, it served as a reminder of the stakes involved in addressing the problem.

WATCH: An iceberg the size of Delaware broke off Antarctica