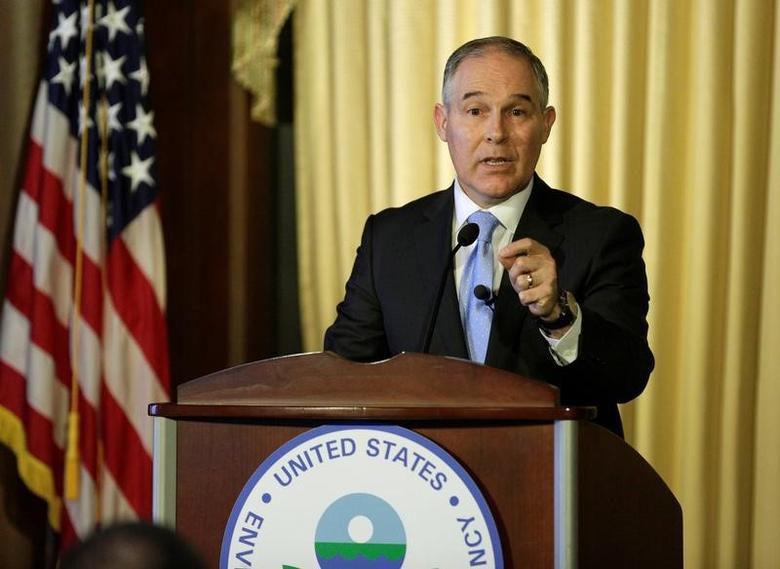 The White House is proposing to slash a quarter of the U.S. Environmental Protection Agency's budget, targeting climate-change programs and those designed to prevent air and water pollution like lead contamination, a source with direct knowledge of the proposal said on Thursday...

The 23-page 2018 budget proposal, which aims to slice the environmental regulator's overall budget by 25 percent to $6.1 billion and staffing by 20 percent to 12,400 as part of a broader effort to fund increased military spending, would cut deeply into programs like climate protection, environmental justice and enforcement.

The Washington Post was first to report the staff and overall budget cuts, but the source disclosed new details on the impact the cuts would have on programs.

The EPA had until Wednesday to report back to the White House. The agency did not immediately respond to a request for comment on the budget proposal or its counter proposal.

The proposal, sent to the EPA this week, would cut into grants that support American Indian tribes and energy efficiency initiatives, according to the source, who read the document to Reuters.

The proposal would cut funding for the brownfields industrial site cleanup program by 42 percent to $14.7 million. It would also reduce funding for enforcing pollution laws by 11 percent to $153 million.

The budget did not cut state revolving funds for programs, that Congress tapped last year to provide aid to Flint, Michigan, for its lead pollution crisis.

All staff at a research program, called Global Change Research, as well as 37 other programs would be cut under the plan.

Scott Pruitt, the new head of the EPA, told U.S. mayors on Thursday he would make a priority of cleanups of industrial and hazardous waste sites and improving water infrastructure, even as the White House proposed severe proposed cuts to those programs.

"In this budget discussion that is ongoing with Congress that is just starting, there are some concerns about some of these grant programs that EPA has been a part of historically," Pruitt said.

"I want you to know that with the White House and also with Congress, I am communicating a message that the brownfields program, the Superfund program and the water infrastructure grants and state revolving funds are essential to protect," he said.

A state air pollution expert said the program cuts, if enacted, would harm some of the people most at risk from particulate and lead contamination.

"Any of these programs where they've cut air pollution or water pollution is going to have a direct effect on inner cities," said Bill Becker, director of the National Association of Clean Air Agencies.