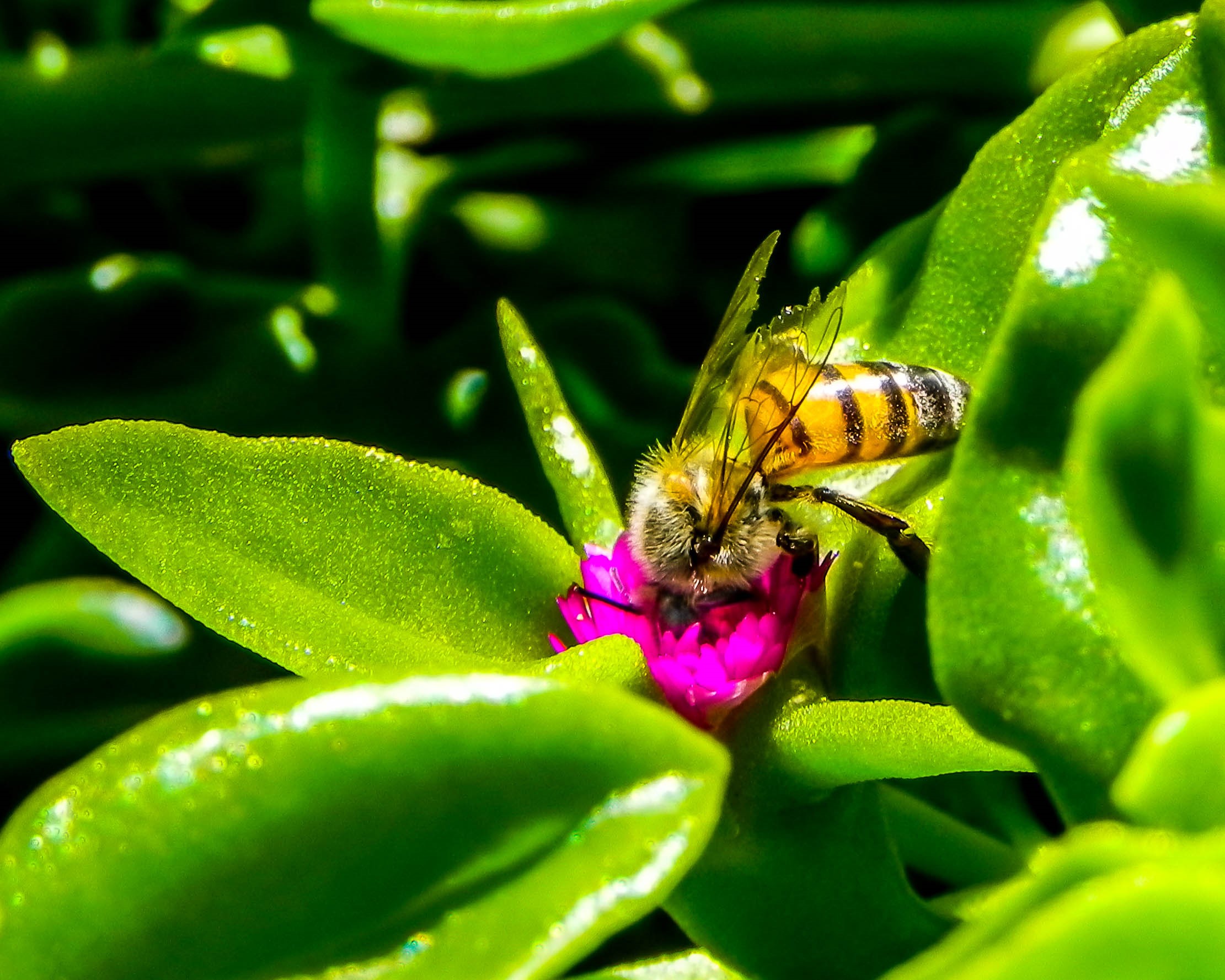 For the first time in history, several American bee species have been classified as endangered. There are many factors that have contributed to the decline in bee populations in recent years, with climate change being at the root of many of these issues. In order to save the dwindling number of bees, we must implement the mitigation and management plans that are in place, including the Environmental Protection Agency’s Risk Assessment Guide, the United States Government’s Pollinator Research Action Plan, and the Canadian Governments Pollinator Health Action Plan. The implementation of these practices could mean life of death for some species...

With all the media attention surrounding bees, there are some misconceptions about endangered bees and climate change. There are roughly 20,000 different species of bees, which can make keeping up with the latest bee news a little hectic. Although there are some misconceptions being spread around on social media, honey bees are not endangered. In the United States, the only bees that have been added to the endangered species list are seven species of Hawaiian yellow-faced bees.

Hawaiian yellow-faced bees are mostly found in Hawaii as well as the surrounding islands. These bees can be found in a variety of habitats, which include forests (both wet and dry), shrub landscapes, and coastlines. There are many different reasons these bees are endangered, including habitat loss, pesticides, and other anthropogenic causes.

Declining numbers of many different species of bees have been seen around the world, which means that there is a real risk of additional species being classified as at risk or endangered if something is not done. In the span of just seven years, the United States saw an approximate average rate of 1.6 million bees die off each year, totalling ten million bees. As a result, there are some groups who believe that additional bee species should also be considered. For example, some have argued that, due to their rapidly declining numbers, the rusty patched bumble bee (Figure 1) should also be placed on the endangered list, although no decisions to add this species has yet been reached.

Figure 1: Picture of a Rusty Patched Bumble Bee. Source: The Government of Ontario

Climate change is at the root of many environmental issues, although its effects may not always be obvious. For example, the gourd bee is another species that has seen a decline in numbers in recent years. The gourd bee is a oligolectic bee, meaning that they rely on very specific plants to survive. As its name implies, the gourd bee (or squash bee) relies on vegetables such as squash or pumpkins. However, climate change has reduced the yield rate of these vegetables, which can, in turn, impact the rate of success of gourd bees. Rusty patched bumble bees are similarly threatened: according to the U.S Fish and Wildlife Service’s Rusty Patched Bumble Bee Fact Sheet, they state that climate change can affect these bees in several different ways, including, “increased temperature and precipitation extremes, increased drought, early snow melt and late frost events.”

Climate change not only affects bees directly, by altering the environments in which bees build their homes, but also indirectly—for example, scientists are concerned about the effects that earlier winter thaws will have on some bee species. The earlier the snow and frost thaws, the earlier flowers tend to bloom. The concern comes from the inability to know if bees will be able to keep up with the changing environment.

Climate change also affects bees by limiting the amount of space bees deem as suitable conditions. According to Time Magazine,

“For the study, researchers looked at 110 years of data on 67 bumblebee species to track their movements over time. Activity between 1901 and 1974 was compared to movement in recent decades when climate change accelerated. In the northern end of their range, bees have failed to migrate closer to the North pole. In the southern end, many populations have died. Altogether, bees have lost a range of up to nearly 200 miles in both North America and Europe. The study, which evaluated land use changes and pesticide application in addition to weather conditions, attributed the drop to climate change.”

Climate change can also exacerbate other issues, such as invasive species. For instance, the parasitic fungus Nosema ceranae wasn’t previously considered to be significant threat to bee populations worldwide due to the fact that it has trouble surviving in cold weather conditions. However, now that global temperatures are increasing, N. ceranae has become more widespread within many bees’ habitats. In fact, they are thought to be at fault in some instances regarding Colony Collapse Disorder, a phenomenon in which bees abandoned their hive, leaving their queen and young larvae behind for reasons that are not always obvious.

Invasive species are one of the reasons Hawaiian yellow faced bee numbers have been declining. These bees like to nest in washed up coral that can be found along the coast. However, this habitat is threatened as invasive species muscle their way in to prime real estate, coupled with rising sea levels, and even the instance of a tsunami wiping out some populations, further limiting these species’ habitat.

At the moment, many factors related to and including climate change are putting pressure on bee species, and on scientists to find ways to mitigate these deleterious effects on bee populations. If something is not done now, then we can expect to see additional species of bees on the endangered list. As discussed before, if no changes are made, the rusty patched bumble Bee will likely be the next bee species added to the endangered list, with more to follow.

Why are Bees Important

Bees greatly contribute not only to the pollination of wildflowers, but also to the pollination of agricultural crops. It is estimated that bees and other pollinators pollinate almost 90% of flowering plants and “70% of the 124 world’s main crops.” Without bees, these numbers would begin to rapidly decline.

Although bees are invaluable, attempts have been made to quantify their economic contributions. According the United States Department of Agriculture, honey bee pollination alone is valued above $14 billion a year. Greenpeace estimates that the benefit to the global economy due to pollination for crops that need to be pollinated in order to survive reaches about 265 euro, which is $279.88 USD.

In fact, the government of Canada shares a formula (Figure 2) in which you can calculate the monetary benefit of bee pollination in relation to a specific crop.

If we look at bees as a sort of commodity, we can come up with many reasons to save them: for example, saving wild plants, saving crops, saving honey. However, one of the main reasons we should be implementing strategies to save the bees is because they are endangered. Bees are important because they exist and deserve to exist despite growing environmental issues. There are many anthropogenic influences that caused for bee numbers to decline, whether it be habitat loss, climate change, or pesticides. It is easy to get lost in the justification of saving a species, when the bottom line is that they should be saved because they need to be.

What is Being Done

The government of Ontario has published a plan called the “Pollinator Health Action Plan”, which addresses many of the contributing factors relating to the decline of bee populations, including habitat rehabilitation, the mitigation and prevention of diseases and bee pests, climate change, and pesticide exposure. In the US, the White House under President Obama released a “Pollinator Research Action Plan” which aims to address issues such as habitat depletion and environmental stressors. The Environmental Protection Agency also provides pollinator risk assessment in the hopes of preventing some of these issues. Unfortunately, no specific plans to help the Hawaiian yellow-faced bee have been released by the United States Government, or the Government of Hawaii yet.

In urban areas, some people are taking matters into their own hands. Some concerned citizens have even taken to making “bee hotels.” Exactly what it sounds like, bee hotels are human-made bee homes, made in the effort to solve the problem of habitat loss by providing habitats where there are none. These bee hotels can be made for many different species of bees depending on that specific species’ real estate preferences. For example, K-abeilles Hotel for Bees adds to the aesthetic beauty of an area while also providing homes of different size, texture and shape for any pollinator who might be looking for a home. Of course, people can also build smaller and more simple pollinator and bee hotels that are very effective and more realistic for a small home craft and garden project, but which still make a big difference.

There are also countless articles and blogs that encourage anyone to plant bee- and pollinator-friendly gardens to attract pollinators and help them to thrive in sometimes unfavorable conditions, while also reaping the benefits of seeing your backyard garden thrive with all the extra attention.

Although the number of bees are declining, there is still time to save them. Through the changes being implemented to protect and bolster their numbers and the education concerning bees and their importance to the environment, bees have a fighting chance to survive the hurdles being encountered due to climate change.

Additionally, the focus of remediation and rehabilitation should also be split, with a great focus on prevention strategies. It is better for the environment and easier for many species to not be exposed to dangerously low numbers and environmental degradation, than to try and remedy damage that has already been caused.

Lauren Bennett is a Graduate Research Fellow at the Climate Institute