95-DEGREE DAYS: HOW EXTREME HEAT COULD SPREAD ACROSS THE WORLD...

Extremely hot days, when temperatures soar to 95 degrees Fahrenheit or higher, can be miserable. Crops wilt in the fields. Electric grids strain to keep pace with demand. People are at greater risk of dying. And those hot temperatures are expected to be much more frequent in the coming decades...

Days per year above 95°F

The map above, based on a new analysis from the Climate Impact Lab, shows how 95-degree days (35 degrees Celsius) are expected to multiply this century if countries take moderate climate action. In this scenario, countries would take some measures, but not drastic ones, to curb emissions — roughly the trajectory of the current pledges under the Paris climate agreement.

The resulting global warming would still cause significant shifts for many cities. In Washington, from 1986 to 2005, an average of seven days each year had temperatures of at least 95 degrees. By the end of the century, the city can expect 29 of these extremely hot days per year, on average. (The likely range is 14 to 46 hot days per year.)

Phoenix is used to the heat, averaging 124 days per year with 95-degree weather. At the end of the century, that’s expected to increase to around 155 days — an extra month of extreme temperatures each year. Madrid would go from eight severely hot days per year to 43, Beijing from nine to 35.

The swings are even greater closer to the equator. New Delhi, India’s capital city, has historically averaged 105 days with temperatures of at least 95 degrees each year. That’s likely to rise to a range of 137 to 200 days per year.

Things could get worse if countries fail to take action

If the world’s nations took no action on global warming, and emissions continued to rise at the same pace they did in the first decade of this century — with total global warming of 7.2 degrees Fahrenheit or more by the end of the century — extremely hot days would become much more commonplace.

Global warming if no action is taken

Days per year above 95°F

By 2100, Washington could swelter in 95-degree weather for fully one-fifth of the year — around 74 days, on average. Large swaths of Brazil and sub-Saharan Africa would experience these temperatures for most of the year.

In the United States, electricity use soars as temperatures rise and more households use air-conditioning more frequently. One recent study found that the United States’ electric grid would have to handle a 7.2 percent increase in peak demand this century under a moderate warming scenario. 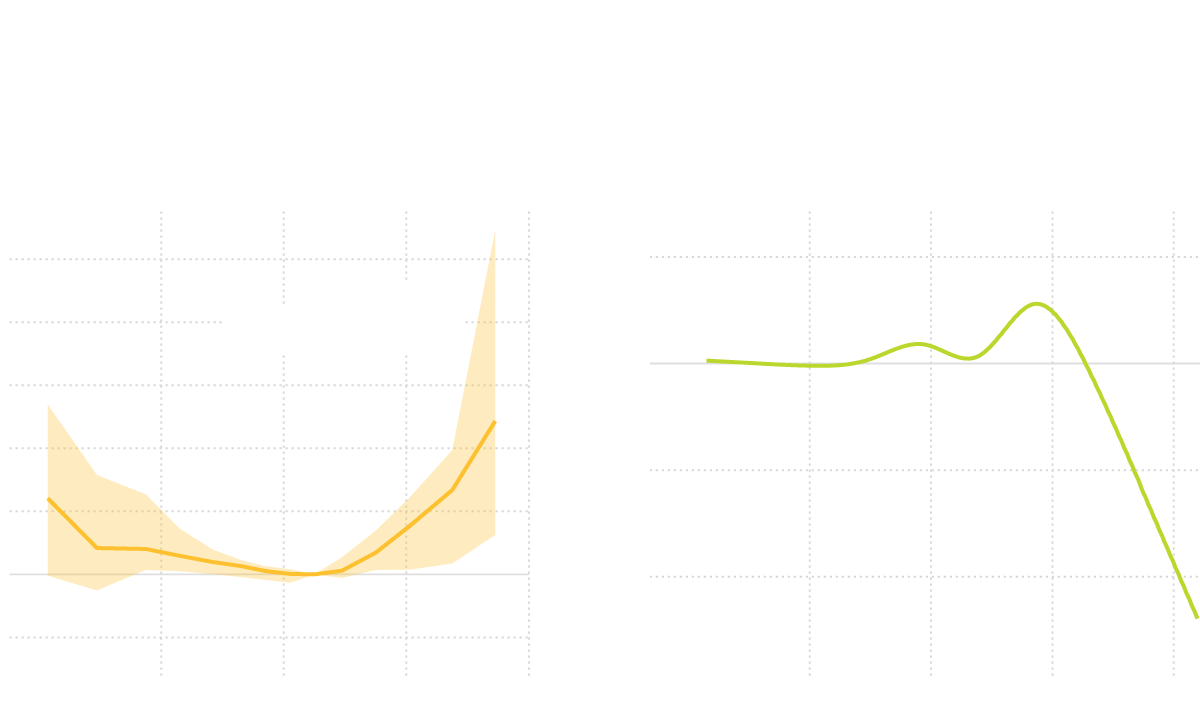 Sources: University of California, Berkeley and NBER; Proceedings of the National Academy of Sciences. Via Tamma Carleton/Science

The flip side is that air-conditioning can be an essential adaptation tactic. In countries without widespread cooling, heat deaths rise more sharply during the hottest days. One study estimated that heat deaths in India increase by 3.2 percent for every 1.8 degrees Fahrenheit above 68 (or every 1 degree Celsius above 20). Energy use in many countries may rise sharply as people struggle to adapt to a hotter climate.

Other scientists have found that corn and soybean yields in the United States plummet precipitously when temperatures rise above 84 degrees Fahrenheit (29 degrees Celsius), and that worker productivity declines sharply, particularly for outdoor jobs. And researchers are trying to understand how crime and conflict might rise as temperatures increase.

Ultimately, people will be better able to adapt if they have a better idea of what individual cities and regions can expect, said Trevor Houser, who co-directs the Climate Impact Lab. In the United States, some urban planners are already experimenting with techniques like adding green spaces or increasing the reflectivity of rooftops to cool down city centers during heat waves.

“Right now, when you start talking to people about higher temperatures, they tend to think, great, more beach days,” said Solomon Hsiang, a professor of public policy at the University of California, Berkeley who helps direct the lab. “What’s often less appreciated is just how much an extremely hot day can distort our lives in all sorts of ways we don’t often even think about.”

By BRAD PLUMER and NADJA POPOVICH

Maps are based on an analysis by Bob Kopp, D.J. Rasmussen, Jiacan Yuan, Michael Delgado and Justin Simcock at the Climate Impact Lab, and use the median value of the probability distribution for days per year with a maximum over 95 degrees Fahrenheit. In the article, the ranges labeled “likely” refer to outcomes with a two-thirds chance of occurring under the distribution.