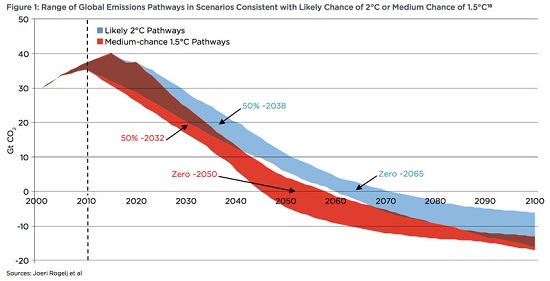 No country on Earth is taking the 2 degree climate target seriously...

One of the morbidly fascinating aspects of climate change is how much cognitive dissonance it generates, in individuals and nations alike.

The more you understand the brutal logic of climate change — what it could mean, the effort necessary to forestall it — the more the intensity of the situation seems out of whack with the workaday routines of day-to-day life. It’s a species-level emergency, but almost no one is acting like it is. And it’s very, very difficult to be the only one acting like there’s an emergency, especially when the emergency is abstract and science-derived, grasped primarily by the intellect.

This psychological schism is true for individuals, and it’s true for nations. Take the Paris climate agreement.

In Paris, in 2015, the countries of the world agreed (again) on the moral imperative to hold the rise in global average temperature to under 2 degrees Celsius, and to pursue "efforts to limit the temperature increase to 1.5 degrees." To date, 62 countries, including the United States, China, and India, have ratified the agreement.

Are any of the countries that signed the Paris agreement taking the actions necessary to achieve that target?

It can’t just be a march. It has to be a movement.’ What’s next for climate activists?

“Okay, so what’s next?” said Gene Karpinski, president of the League of Conservation Voters, on Sunday morning as he looked out at the nearly 100 women gathered inside a meeting room at Union Station.

Less than 24 hours earlier, they had joined tens of thousands of demonstrators on a sweltering day in the nation’s capital for the latest mass protest of the Trump era. The Peoples Climate March had been a chance to push for action on climate change and to oppose what activists see as an unprecedented assault on environmental protections during President Trump’s first 100 days. Protesters had chanted and sung, carried clever signs, Snapchatted and tweeted their way down Pennsylvania Avenue to the White House.

Now, the streets of Washington were quiet. The crowds had mostly gone home. Trump was still in the White House. Republicans still controlled Congress. And the entire climate movement, which had seen the Obama era as a time of progress in combating global warming and prioritizing environmental safeguards, faced the question Karpinski had posed: What’s next?

‘It can’t just be a march. It has to be a movement.’ What’s next for climate activists? by Brady Dennis, Energy & Environment, Washington Post, May 1, 2017

Global warming scientists learn lessons from the pause that never was

‘Despite all the other indicators of global warming showing business as usual, a fixation on the average temperature of the globe stuck firm.’ Photograph: Philippe Huguen/AFP/Getty Images

People don’t talk about how global warming has stopped, paused or slowed down all that much any more – three consecutive hottest years on record will tend to do that to a flaky meme.

But there was a time a few years ago when you couldn’t open your news feed without being told global warming had stopped by some conservative columnist, climate science denier or one of those people who spend their waking hours writing comments on stories like this.

The issue at hand was one of the multiple measurements used by scientists to monitor the state of the planet – the globally averaged temperature.

Depending on which particular set of data you looked at, and how you calculated trends, there was an argument that temperature rises had slowed over a period of about 15 years.

Global warming scientists learn lessons from the pause that never was by Graham Readfearn, Planet Oz, Guardian, May 3, 2017 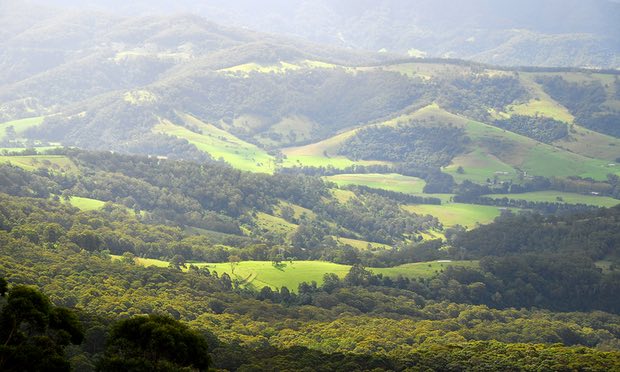 In the 2015 Paris climate agreement, 195 nations committed to limit global warming to two degrees above pre-industrial levels. But some, like Eelco Rohling, professor of ocean and climate change at the Australian National University’s research school of earth sciences, now argue that this target cannot be achieved unless ways to remove huge amounts of carbon dioxide from the atmosphere are found, and emissions are slashed.

This is where negative emissions technologies come in. The term covers everything from reforestation projects to seeding the stratosphere with sulphates or fertilising the ocean with iron fillings.

It’s controversial – not least because of the chequered history of geoengineering-type projects, but also because of concerns it will grant governments and industry a licence to continue with business as usual. But many argue we no longer have a choice.

“Most things are not applied yet on larger scales but we have a pretty good feeling of things that will work and we can quantify roughly how much carbon we should be able to remove from the atmosphere with them,” says Rohling.

The Glaciers are Going 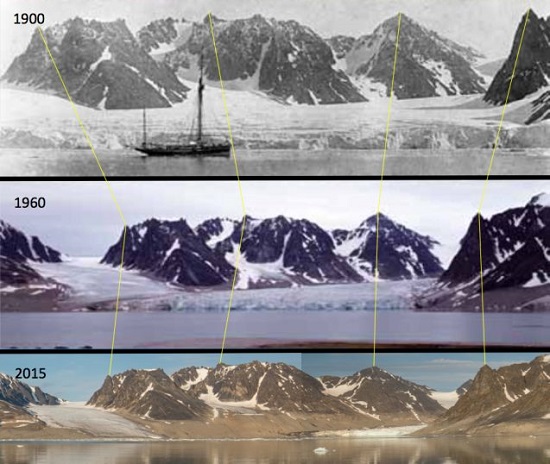 As can be seen above, the Waggonwaybreen glacier in Svalbard, Norway, has retreated substantially since 1900. Svalbard’s glaciers are not only retreating, they are also losing about two feet of their thickness each year. Glaciers around the world have retreated at unprecedented rates and some have disappeared altogether. The melting of glaciers will affect people around the world, their drinking water supplies, water needed to grow food and supply energy, as well as global sea levels.

The Intergovernmental Panel on Climate Change estimates that around the world glaciers (excluding the Greenland and Antarctic ice sheets) will decrease in volume between 15 to 55 percent by 2100 even if we are able to limit global warming to under 2˚C; they could shrink up to 85 percent if warming increases much more.

In Earth’s history, there have been at least five major ice ages, when long-term cooling of the planet resulted in the expansion of ice sheets and glaciers. Past ice ages have been naturally set off by a numerous factors, most importantly, changes in the Earth’s orbit around the sun (Milankovitch cycles) and shifting tectonic plate movements that affect wind and ocean currents. The mixture of gases in the atmosphere (such as carbon dioxide and methane) as well as solar and volcanic activity are also contributing factors. Today we are in a warm interval—an interglacial—between ice ages.

The Glaciers are Going by Renee Cho, State of the Planet, Earth Institute, Columbia University, May 5, 2017