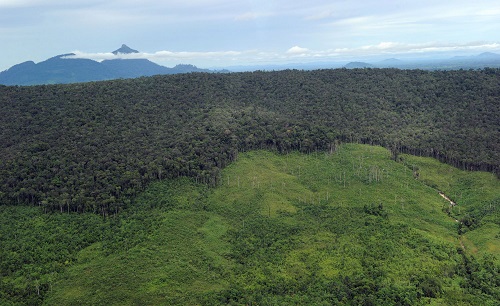 Palm oil is the second-most important oil in the modern consumer society, after petroleum. Producing it is a $50-billion-a-year business. It’s in a multitude of the household products in North America, Europe, and Australia: margarine, toothpaste, shampoo, lipstick, cookies, Nutella, you name it...

Doritos are saturated with palm oil. It’s what gives chocolate bars their appetizing sheen – otherwise, they would look like mud. Palm oil has replaced artery-clogging ghee as India’s main cooking oil. India is now the major consumer of this clear, tasteless oil squeezed from the nuts of the oil-palm tree, Elais guyanensis,originally from West Africa, but now grown pantropically, mainly within ten degrees north and south of the Equator.

Indonesia and Malaysia chose palm oil as their main economic engine after independence in the 1960s, and they together account for 85 percent of world production, which is expected to double by 2050. As oils go, palm oil gives you the best bang for your buck. Soy fields yield far less than rows of oil-palm trees and have to be replanted annually, while the palms keep bearing huge clusters of oil-rich nuts for 20 years, and can then be replaced. In 2015 17 million hectares of oil palm yielded a total of 62 million tons of oil, while the 120 million hectares planted in soy yielded 48 million tons. Palm oil doesn’t lose its properties when it’s heated, or become rancid at room temperature, and it has multiple industrial uses. It is the edible vegetable oil of choice and is not going away.

Borneo is ground zero for oil-palm devastation. Nowhere has more native rain forest been wiped out.  The world’s third-largest island, Borneo’s lower 73 percent is in Indonesia— the territory of Kalimantan— and its upper portion consists of two states in Malaysia, Sarawak and Sabah, separated by the small, oil-rich sultanate of Brunei. Fifty percent of the lowland Borneo rain forest, which once covered all of the island up to 10,000 feet, is gone, but it’s still the third-largest in the world, after the Amazon and Equatorial Africa’s. It is part of the most ancient rain forest— forest, period— on earth: 130 million years old, more than twice as old as the Amazon’s, and has the greatest density of higher plant species, an estimated 15,000 flowering species. Each new botanical or entomological expedition comes back with new species. Some 20,000 insect species have been found in Sarawak’s Gunung Mulu National Park alone.

Vanishing Borneo: Saving One of the World’s Last Great Places by Alex Shoumatoff, Yale Environmnet 360, May 18, 2017

Climate change, and its impacts on extreme weather and temperature swings, is projected to reduce global production of corn, wheat, rice and soybeans by 23 percent in the 2050s, according to a new analysis.

The study, which examined price and production of those four major crops from 1961 to 2013, also warns that by the 2030s output could be cut by 9 percent.

The findings come as researchers and world leaders continue to warn that food security will become an increasingly difficult problem to tackle in the face of rising temperatures and weather extremes, combining with increasing populations, and volatile food prices.

The negative impacts of climate change to farming were pretty much across the board in the new analysis. There were small production gains projected for Russia, Turkey and Ukraine in the 2030s, but by the 2050s, the models “are negative and more pronounced for all countries,” the researchers wrote in the study published this month in the journal Economics of Disasters and Climate Change. 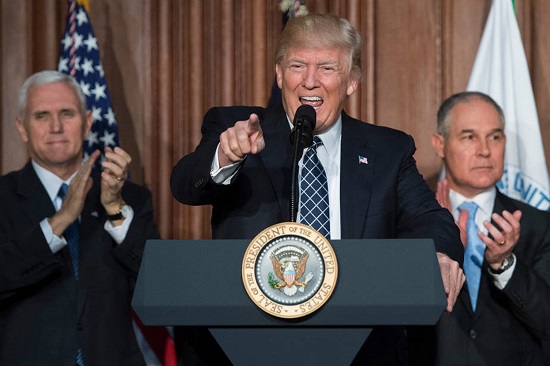 The White House budget is only the first step in a long process. Congress members are already raising concerns. Credit: Jim Watson/AFP/Getty Images

Details of President Donald Trump's 2018 budget proposal, leaked this week, reveal that the administration appears determined to wallop environmental programs, including many that tackle climate change. It would cut Environmental Protection Agency funding by nearly one-third, slash spending on renewable energy innovation, and eliminate the Greenhouse Gas Reporting program, among other programs.

The White House only has the first move in the long budget process; once the proposal is unveiled officially next week, it will be Congress' turn to weigh in on spending priorities. With Trump embroiled in scandal, and many popular programs targeted for elimination, it's not at all clear that lawmakers will follow the president's lead.

The president's so-called "skinny" budget, released in March, also called for slashing EPA funding by 31 percent but was light on detail.

This second version of the budget proposal, leaked late this week, reveals that the administration intends to follow through on its commitment to reduce EPA to the size it was in the 1970s, when climate change wasn't on its radar screen.

Research on air and energy would be slashed by 67 percent, and clean air regulatory programs—which include climate change—would be cut 47 percent.

About Skeptical Science Creator, John Cook...
Skeptical Science was created and maintained by John Cook, a research assistant professor at the Center for Climate Change Communication at George Mason University. John co-authored the college textbooks Climate Change: Examining the Facts with Weber State University professor Daniel Bedford. He was also a coauthor of the textbook Climate Change Science: A Modern Synthesis and the book Climate Change Denial: Heads in the Sand. In 2013, he lead-authored an award-winning paper analyzing the scientific consensus on climate change that has been highlighted by President Obama and UK Prime Minister David Cameron. In 2015, he developed a Massive Open Online Course on climate science denial with the Global Change Institute at the University of Queensland (see a full list of his scholarly publications). There is no funding to maintain Skeptical Science other than Paypal donations - it's run at personal expense. John Cook has no affiliations with any political organisations or groups. Skeptical Science is strictly a labour of love. The design was created by John's talented web designer wife.