With May in the books, it’s official: carbon dioxide set an all-time monthly record. It’s a sobering annual reminder that humans are pushing the climate into a state unseen in millions of years...

Carbon dioxide peaked at 409.65 parts per million for the year, according to data from the National Oceanic and Atmospheric Administration. It’s not a surprise that it happened. Carbon dioxide levels at Mauna Loa Observatory in Hawaii peak in May every year. 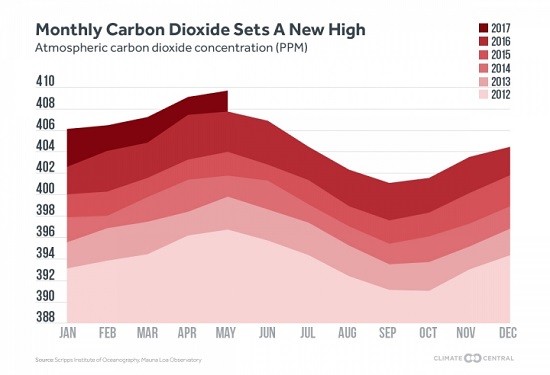 The news comes one day after President Trump announced his plan to pull out of the world’s main climate agreement, juxtaposing the severity of the problem with an administration that has shown little to no interest in addressing it.

While plants growing in the northern hemisphere will draw a few parts per million of the carbon dioxide out of the atmosphere over summer, make no mistake, human pollution is pushing atmospheric carbon dioxide ever higher. Mauna Loa Observatory crossed the 410 ppm threshold for the first time in recorded history in April. The May average is almost exactly what UK Met Office scientists predicted it would be in their first carbon dioxide forecast.