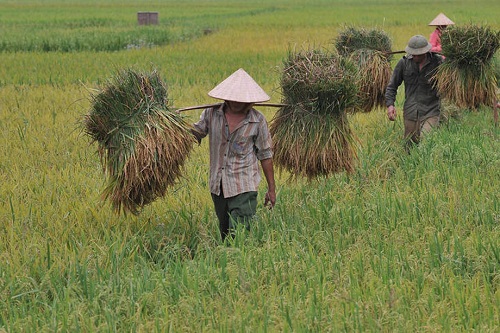 With global warming expected to significantly impact future yields in countries located closer to the equator, the United Nations agriculture agency is calling on Asia-Pacific economies to take a leading role in adaptation and mitigation.

“Many APEC [Asia-Pacific Economic Cooperation] economies have already felt the full force of agricultural losses from natural disasters in recent years, with the vast majority of these being climate related,” said Kundhavi Kadiresan, Assistant Director-General and FAO Regional Representative for Asia and the Pacific.

Geographically, the negative impact of climate change on agricultural output could result in lower yields of rice, wheat, corn and soybeans in countries with tropical climates, compared with the impacts experienced by those in higher latitudes. Fisheries could also be affected by changes to water temperature, warned the Food and Agriculture Organization (FAO) today.

“The annual tally runs into the billions and billions of dollars in losses. So, the time to act is now. Policy makers need to prepare for changes in supply, shifting trade patterns and a need for greater investment in agriculture, fisheries, land and water management, that will benefit smallholder farmers and others that produce our food,” Mr. Kadiresan added.

Many vital agricultural regions in Asia are at risk of crossing key climate thresholds that would cause plant and animal productivity to decline, according to a meeting in Viet Nam of Agriculture Ministers of APEC member economies.

Based on the findings of the global research community, the International Panel on Climate Change (IPCC) anticipates that these trends are expected to worsen in the future with the projected impacts of anthropogenic climate change.

Much can be done to increase the efficiency of agriculture and land-use activities in Asia, according to Mr. Kadiresan.