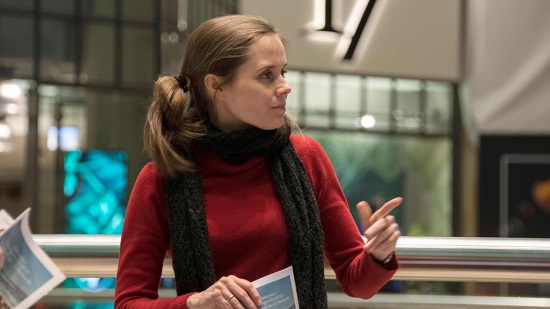 Iceland Prime Minister Katrín Jakobsdóttir meets people at a stand of her party set up at the Kringlan shopping mall in Reykjavik on Oct. 25, 2017. Credit: Halldor Kolbeins/AFP/Getty Images

Iceland's most trusted politician is a feminist environmentalist who is the 'antiTrump'...

Iceland's new prime minister is a feminist and environmentalist who is among the youngest leaders in the world. She has a degree in literature with a special interest in Icelandic crime novels. She appeared in a  music video 20 years ago with an Icelandic band, Bang Gang. And she's considered Iceland's most trusted politician by numerous polls.

Her name is Katrín Jakobsdóttir, 41, and she's a mother of three boys and comes from a family of poets and professors. Her new coalition government took power at the end of November, and it spans the political spectrum in Iceland from her Left-Green Movement to the Independence Party to the Progressive Party.

Jakobsdóttir talks with The World's host Marco Werman about everything from what it's like to lead a coalition that straddles the left-right political divide to commuting by bicycle.

Iceland's most trusted politician is a feminist environmentalist who is the 'antiTrump' by Traci Tong, PRI, Dec 19, 2017