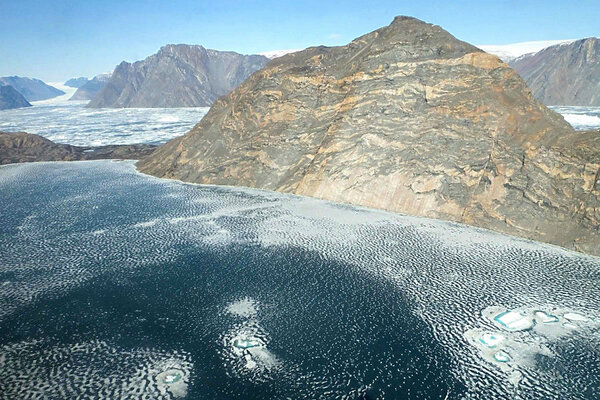 The fjord of Violin Glacier, with Nord Glacier at the upper left corner, in the east-central region of Greenland, is seen in a photo taken during NASA's IceBridge campaign May 19, 2016. Maria-Jose Vinas/NASA/Handout via Reuters/File

A new study suggests persistent atmospheric conditions as one possible cause behind the ice melt runoff and rising surface temperatures near the northern pole.

A new study published in Nature Communications focuses on the effects that rising temperatures and changing albedo have had on Greenland. The researchers concluded that, among other possible causes such as tropical weather and latent heat, a phenomenon known as Arctic amplification could be the cause behind melting ice.

Arctic amplification explains the perpetuation of melting ice in the poles: As the Earth has heated up and melted ice, darker spots in the ocean that are uncovered by the loss have absorbed more solar radiation, further warming the sea and maintaining the cycle. The warmer waters could also balance more evenly with waters farther south, impacting the speed, intensity, and consistency of the jet stream, which in turn could bring hotter air farther north.

Arctic amplification affects the polar regions of the globe, where faster warming has already invited research into the effects of ice melts on sea levels. The new research contends that, with the melting already in motion, the Earth’s atmospheric systems could push such effects even farther.

“If loss of sea ice is driving changes in the jet stream, the jet stream is changing Greenland, and this, in turn, has an impact on the Arctic system as well as the climate. It’s a system, it is strongly interconnected and we have to approach it as such,” Lamont-Doherty Earth Observatory professor and lead study author Marco Todesco said in a Columbia University release.

Last summer, Greenland experienced a melting season that brought record surface temperatures and melt runoffs to the island country along with a shift in the jet stream’s path. Those changes brought about a lower albedo in Greenland’s waters, opening darker waters to the sun’s radiation.

The researchers behind the study stop short of confirming Arctic amplification as the root of warming, but their results point to future temperature increases and melting.

“The Arctic is full of climate surprises, and Greenland is a key player,” National Oceanic and Atmospheric Administration scientist James Overland, who is not associated with the study, said in the release. “Climate models suggest a 4 degree Celsius Arctic temperature increase by mid-century, but such jet stream related surprises acting on Greenland as reported by Tedesco et al. can accelerate Arctic climate change.”

Large increases could come sooner than mid-century; some readings taken this year in Nuuk, Greenland, were the highest monthly figures ever recorded. This could be bad news for the Greenland ice sheet which, if completely thawed, would raise global water levels by more than 20 feet.

Greenland’s annual ablation, or ice loss, season began this past week and has already seen a daily loss of 1.1 billion tons of ice, which when melted equates to around 0.23 cubic miles of water. A new National Aeronautics and Space Institute survey aimed at tracking polar ice, Operation IceBridge, could provide further information on melting throughout this ablation season.

The science of Arctic amplification is still not an exact one, and it may not explain all of the effects of the ongoing melts and temperature shifts at the Earth’s poles. But the research points to the phenomenon as a probable cause and its impact is expected to be felt over the coming decades.