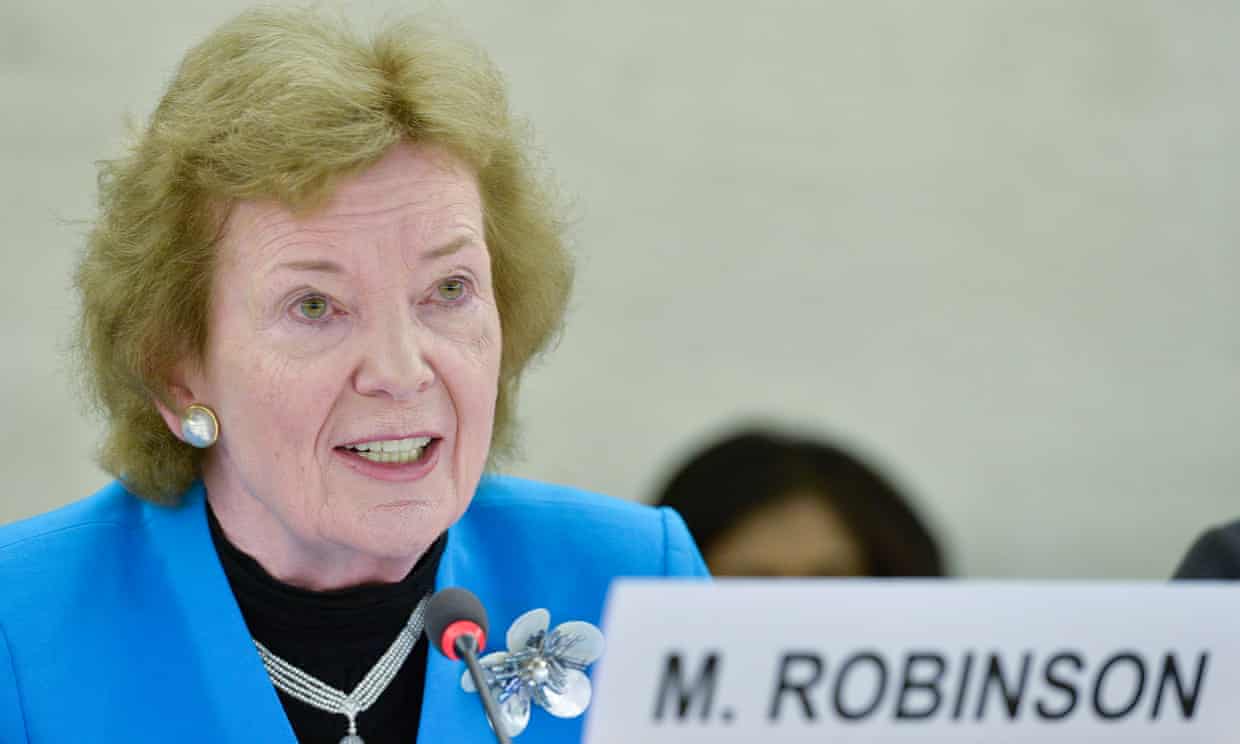 Climate change envoy singles out both countries for subsidizing the fossil fuel industry and says the UK has lost its position as a climate leader...

Ban Ki-moon’s climate change envoy has accused the UK and Germany of backtracking on the spirit of the Paris climate deal by financing the fossil fuel industry through subsidies.

Mary Robinson, the former president of Ireland and UN special envoy on climate change and El Niño, said she had to speak out after Germany promised compensation for coal power and the UK provided tax breaks for oil and gas.

Governments in Paris last year not only pledged to phase out fossil fuels in the long term but to make flows of finance consistent with the reduction of greenhouse gas emissions.

“They’ve [the British government] introduced new tax breaks for oil and gas in 2015 that will cost the UK taxpayer billions between 2015 and 2020, and at the same time they’ve cut support for renewables and for energy efficiency,” she told the Guardian.

“It’s regrettable. That’s not in the spirit [of Paris]. In many ways, the UK was a real leader [on climate change] and hopefully the UK will become again a real leader. But it’s not at the moment.”

The criticism comes as Theresa May’s government has come under fire at home and abroad for its leadership on climate change after it abolished the Department of Energy and Climate Change. Senior figures such as the outgoing UN climate change chief have urged the UK not to abandon its climate commitments as it leaves the EU. “Let us remember that the Brexit vote was not about climate change,” said Christiana Figueres.

Natalie Bennett, the leader of the Green party, said: “This damning indictment of the UK’s energy policy comes just days after our new prime minister scrapped the Department of Energy and Climate Change and appointed an environment secretary who has consistently voted against measures to tackle climate change.

“I urge Theresa May to listen carefully to Robinson’s remarks and start reversing the damaging policies put in place by her predecessor – like giving tax breaks to fossil fuel companies while cutting subsidies for renewables.”

Robinson said that while Germany had made some positive steps such as aiding developing countries on climate change, it was sending mixed messages.

“Germany says its on track to end coal subsidies by 2018 but the German government is also introducing new mechanisms that provide payment to power companies for their ability to provide a constant supply of electricity, even if they are polluting forms, such as diesel and coal,” she said. She called on Germany to make a real commitment to get out of coal.

But she said her criticism was far from limited to the two countries. “We want all countries to end [fossil fuel] subsidies,” she said.

Robinson’s intervention comes as a group of international statesmen and women including her, Kofi Annan and Desmond Tutu, known as the Elders, released a statement saying they had “major concerns” about action by leaders since the Paris agreement last December. 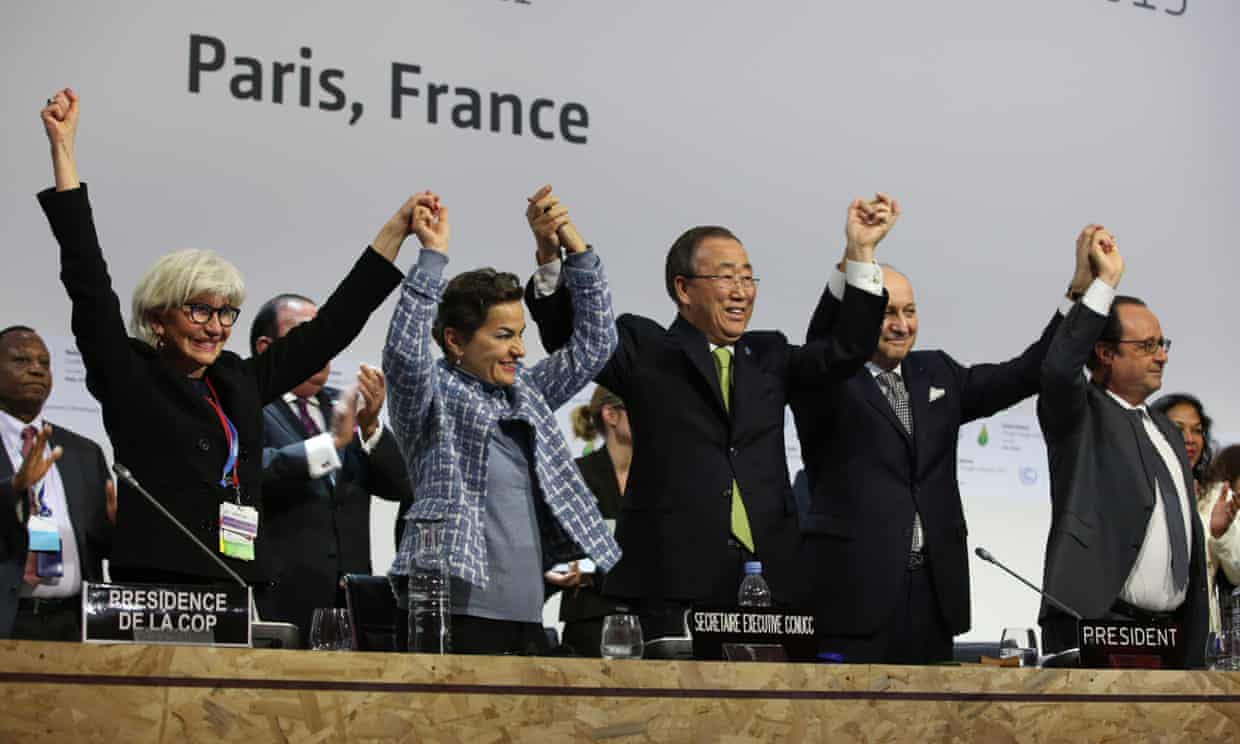 Presidents and prime ministers across the world are making investment decisions that run contrary the Paris deal, they warned. “Some countries are even increasing subsidies to fossil fuel production. This is simply not good enough. While all countries need to act, the industrialised and wealthy countries must lead by example.”

A G7 pledge in May to phase out “inefficient” fossil fuel subsidies by 2025 was “too vague” a commitment and the summit in Japan failed to take action to end subsidies, the group said.

They also said that governments needed to adopt carbon pricing. Ernesto Zedillo, one of the group and a former president of Mexico, said: “Governments and businesses may pay lip service to the transition to carbon neutrality but they need an economic imperative to ditch old models and move to environmentally sustainable investments: pricing carbon provides such an incentive.”

Furthermore, the Elders said they were concerned that the world’s top 10 biggest greenhouse gas emitters had not yet ratified the Paris deal. The US and China have both pledged to ratify the deal this year, which only comes into force once at least 55 countries representing at least 55% of global emissions have ratified.

The likely US Republican presidential nominee, Donald Trump, has said he would try to unpick the deal, but Robinson said if it was ratified by the US this year “unwinding it would be very prolonged and difficult. I sincerely hope we won’t be facing that problem.”

However Hillary Clinton would be good on climate because she had been pushed by Bernie Sanders to adopt an ambitious climate change platform, she said.

Robinson said she been to Ethiopia recently and seen firsthand the way manmade climate change was exacerbating natural climate phenomenons such as El Niño, which brings drought to some parts of the world, and flooding to others. “I saw so many malnourished children, and it’s not tolerable.” 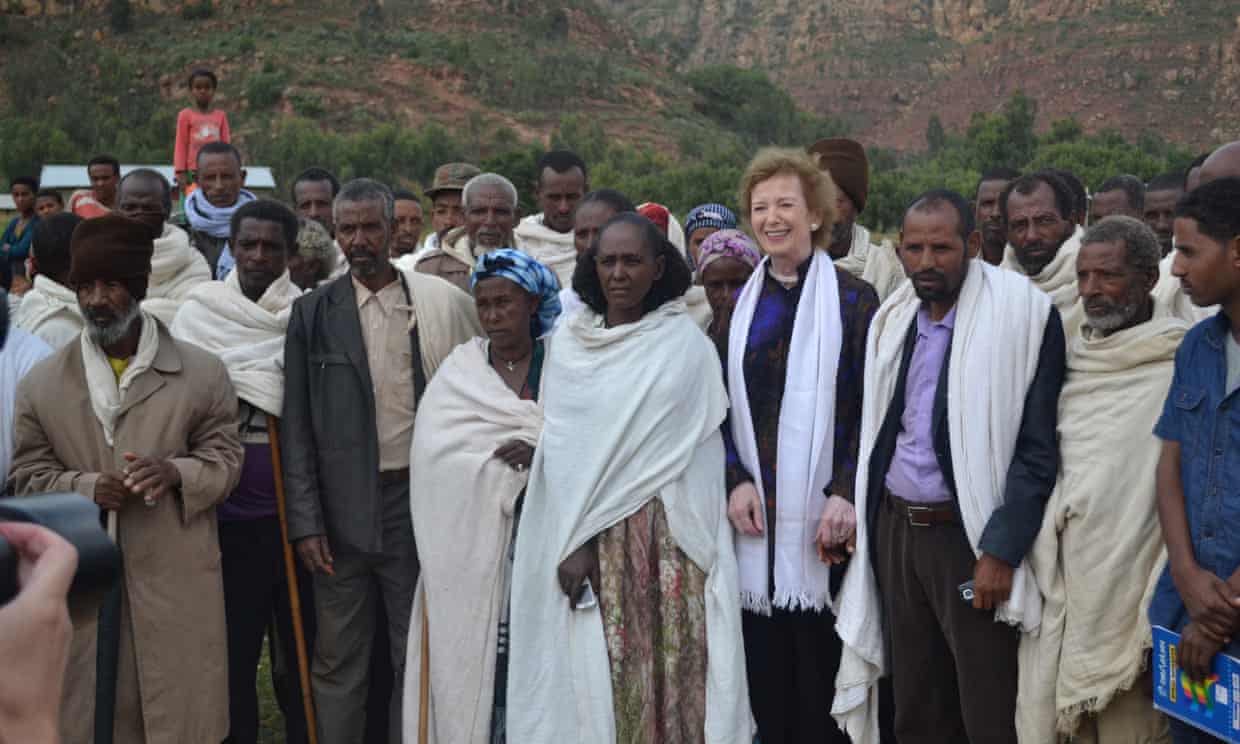 Mary Robinson at the Trócaire project in Adigrat in north Ethiopia. This project supports 30,000 people with emergency aid during the current drought, as well as building long-term irrigation projects. Photograph: Eoghan Rice/Courtesy of Trócaire

A government spokesperson said: “We will need oil and gas for some decades to come, as part of a broader energy mix which also includes nuclear and renewables. We are phasing out the dirtiest form of electricity generation, coal, and encouraging investment in low carbon supply instead, so we can deliver secure and affordable energy across the country.”