CLIMATE CHANGE COULD HAVE DEVASTATING IMPACT ON GLOBAL FISHERIES... With a warming climate, fish may end up migrating northward to cooler waters, a new study has found. The change would deeply impact countries around the world. (Luis Galdamez/Reuters)

But if countries abide by Paris agreement, fisheries could see increase of 6 million tons of fish annually...

If climate change continues unchecked and the global temperature increases by more than the Paris agreement target of 1.5 C, it is certain to have a dire impact on fish catches, a new study has found.

Fishing is a major commercial industry and source of food for many people around the world, particularly in temperate regions. However, as more carbon dioxide is pumped into the atmosphere, it causes the temperature of the world's oceans to rise. This can create less-than-ideal conditions for fish and marine life.

'Imagine: if you're in Vancouver, you're going to see fish that you've never seen before.' - Gabriel Reygondeau, University of British Columbia

Instead of living in an unfriendly environment, the fish will start to migrate to the cooler waters near the poles.

This will leave temperate regions — at the equator and up to 25 degrees latitude both north and south — without the fish they so depend on.

The study, published in the journal Science, used a numerical model to calculate what would happen in a "business-as-usual" scenario where the planet continues to warm 3.5 C above the average. What they found was a major disruption of marine life.

"For every degree Celsius warmer, there will be about three million tonnes of fish that we're losing form the ocean in terms of potential fisheries catches," lead author William Cheung, director of science at the Nippon Foundation-UBC Nereus Program and associate professor at UBC's Institute for the Oceans and Fisheries told CBC News. 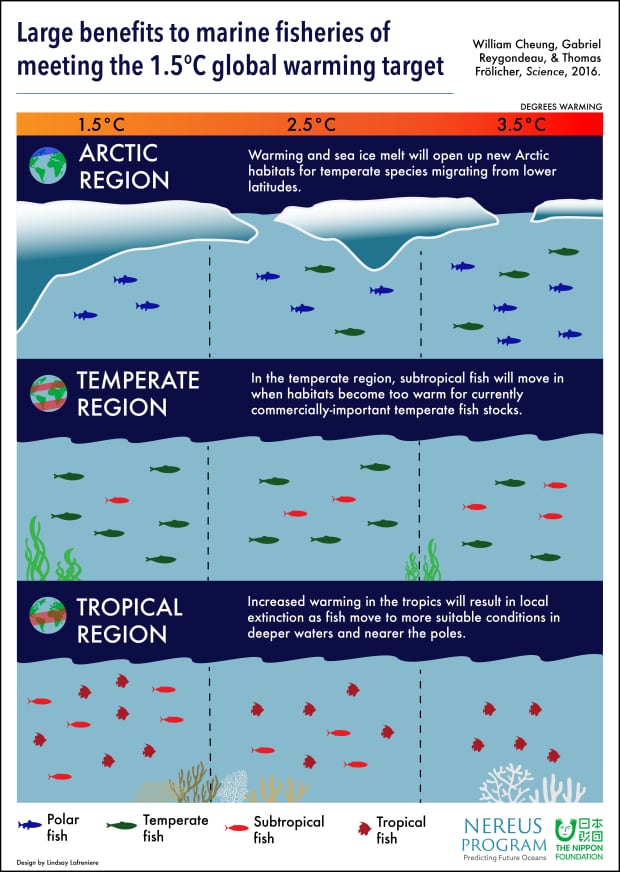 Effects on marine fisheries in the Arctic, temperate, and tropical regions under 1.5, 2.5, and 3.5 degree global warming. (Design by Lindsay Lafreniere, Nippon Foundation-Nereus Program)

And, as Canadians, we'll see the impacts as well.

"In Canada we're used to fishing cod, certain types of fish," said Gabriel Reygondeau, who co-authored the paper. "With climate change, there will be a poleward migration of all the fish. The fish of the tropics will go higher and higher in latitude to track down their optimal environment. Imagine: if you're in Vancouver, you're going to see fish that you've never seen before."

The effects of a warming ocean has already been seen, Reygondeau said.

However, instead of seeing it as bad news, the researchers have taken a positive approach: the Paris climate agreement is on the right track.

"What we show in this paper is all the benefits of reaching this 1.5 C target," Reygondeau said. "The train has already left the station and is going faster and faster. The problem now is how much are we committed to not losing any more."

In order to prevent a large-scale loss of fish, it's important that all the countries — particularly some of the largest emitters of carbon dioxide — hold to the Paris agreement. 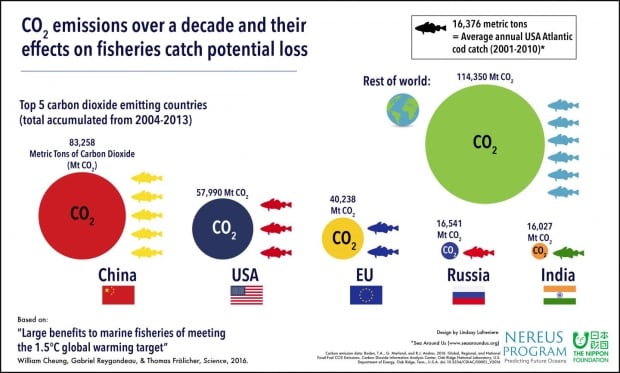 The main goal, Cheung said, was to highlight a very real consequence of climate change.

"Often … agriculture is the main concern," Cheung said. "Fisheries are often not highlighted. But lots of coastal communities are dependant on marine fish. Some of the countries will be at risk of being malnourished if there's a substantial decrease in their fish supply.

"If one of these big, big countries does not respect the Paris a that will clearly, clearly affect the efforts of all the others."

The difference between a 1.5 C and 3.5 C warming is considerable. The study found that the Indo-Pacific region would see a 40 per cent increase in fisheries catches at 1.5 C versus 3.5 C. That translates into a gain of about six million tons of fish annually.

The authors hope their findings will provide an incentive for countries to abide by the climate goals set out by the Paris agreement.

Reygondeau said, "1.5 degrees is a threshold. It's a threshold where it's still acceptable."

"Lots of countries, lots of regions are still going to lose a lot of catch, but it's still acceptable; 1.5 degrees is a tipping point."