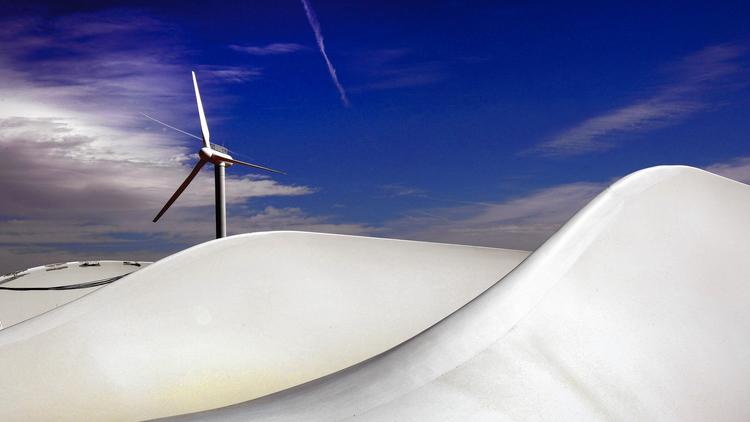 Efforts to increase wind power mean that turbine blades are getting bigger and bigger. But a new design in the works takes the idea to levels most people can barely imagine: Blades up to 656.2 feet long — more than two football fields...

"We call it the extreme scale," Eric Loth, a University of Virginia professor of mechanical and aerospace engineering, said of the planned mega-blades. "There's nothing like it."

Loth is one of the leaders of a team, which includes four universities and two national laboratories, that has three years to build and test a scaled prototype in the hopes of making the blade a reality.

The early design would place two — rather than three — blades onto a tower. But to construct something of that size, the tower is estimated to rise 1,574 feet, nearly one-third of a mile.

To put that in perspective, that's more than 100 feet higher than the Empire State Building.

The diameter of such a facility would be at least 1,312.3 feet, nearly a quarter of a mile.

"It's mind-blowing, what we're proposing in many respects, but I do think it's possible," Loth said.

The super-sized blades would generate up to 50 megawatts of electricity, 25 times more than today's typical turbine.

The U.S. Energy Department is funding the project through its Advanced Research Projects Agency energy program at a cost of $3.5 million.

"The concepts have all looked very promising, but they're all pure simulations," Loth said. "Now we're actually going to build something. That's where the rubber meets the road."

The project's goal is to produce a prototype at one-10th scale by 2019 that would be tested by the National Renewable Energy Laboratory in Colorado.

The blades would look much different look from today's wind turbines.

They wouldn't face the wind but would go downwind, aligning the blades to flow with the wind instead of fighting it.

And instead of a single stiff blade, each blade would be broken into segments, allowing it to be more easily fabricated.

In addition, the concept would allow the blades to "morph" — spread out when the wind is blowing lightly to capture as much power as possible.

"Like a flower, the petals are spread out, and we reach out and grab as much wind as we can," Loth said.

Conversely, when winds blow with hurricane force the blades would contract, almost like a claw.

The segmented blades offer another advantage.

Today's single-framed blades are so big they are difficult for trucks to haul them on highways and difficult to make turns on streets.

But if the design works, the super-sized blades will be broken down in 131.2-foot or 164-foot segments and assembled at the site.

The project raises concern among bird lovers, who have long decried the number of birds and bats killed by wind turbines. The proposition of humongous facilities makes conservation groups nervous.

"The higher you go, you start potentially impacting more migratory birds that otherwise would have flown over the tops of [smaller] turbines," said Michael Parr, vice president and chief conservation officer for the American Bird Conservancy.

If the technology works, Loth wants to avoid putting the big-blade facilities on land. Instead they would be put offshore — some 20 to 25 miles from the coast.

"I really want to focus on going far enough offshore that we're away from the migratory patterns of the birds," Loth said.

But Parr said an offshore wind farm might not be an improvement.

"The problem with offshore turbines is that it's virtually impossible to know and track over time what impact they're having [on bird deaths] because any birds that get struck will fall directly into the ocean and be washed away by the currents or get eaten by sharks," he said.

Although some European countries such as Denmark have jumped into the offshore wind market, the United States has lagged behind.

The U.S. has no permanent offshore wind facilities; projects in Rhode Island and New Jersey are under construction.

California hasn't built any offshore wind facilities, although the development firm Trident Winds wants to put 100 floating wind turbines 15 miles off the coast of Morro Bay. The project is wending its way through the regulatory process.

If the big-blade project becomes a reality, it could go a long way toward helping California meet its ambitious renewable energy goals.

In October, Gov. Jerry Brown signed a climate change bill that requires the state to generate half of its electricity from renewable sources such as wind and solar by 2030.

"California is always leading among states in terms of renewable energy," Loth said. "If we can achieve our goals, California could actually be a great place to have offshore power."

Wind accounts for 4.4% of the country's electricity generation, according to the U.S. Energy Information Administration. California performs better, with wind making up 8.1% of the state's power mix in 2014.

Even if the titanic turbines pass the subscale modeling tests in 2019, Loth said it would take "probably 10, 15 years" before the first facility would be up and running.

"We have to be really careful to prove our technology and our concept before someone's going to sink in a lot of money," Loth said.

"I'll believe it when I see it," said Robert Bryce, energy journalist and a vocal critic of wind energy. "While longer blades may allow project developers to produce more energy from their turbines, they will also require bigger towers to support them. That means higher costs."

But besides generating more electricity, the project's primary goal, team leaders say, is reducing the cost of wind energy by 50%.

"That is the big issue because right now wind energy is more expensive than fossil fuel energy," Loth said. "It's wonderful to have no carbon or CO2 emissions, but you have to do that cost-effectively and that's what this whole project is about."

Then look for those subjects in the navigation links at the top the page page.