EDITORIAL: HARVEY SHOULD BE A WARNING TO TRUMP THAT CLIMATE CHANGE IS A GLOBAL THREAT... 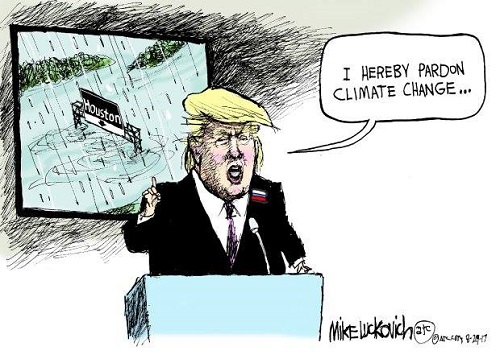 As rains fell and floodwaters rose in Houston, President Trump took to Twitter with an “oh, gosh” tweet: “Wow - Now experts are calling #Harvey a once in 500 year flood! We have an all out effort going, and going well!”

How refreshing it is when the president directs our attention to the words of experts — people who ascertain facts, study the issues, dissect the causes of problems, and put their biases and suppositions aside to figure out solutions.

If Trump himself were to consult the experts — such as, you know, climate scientists — he would learn that global warming is real. He’d also learn that although warming did not cause Hurricane Harvey, it certainly makes such storms stronger, more unpredictable and quicker to intensify. Experts — there’s that word again — say that warmer air temperatures mean more evaporation of moisture from the seas to the skies, and thus more rainfall from storms. Warmer seas — including the Gulf of Mexico — intensify storms, from their size to their wind speeds, and amplify storm surges. (In southeast Texas, the flat geography allows a surging Gulf to intrude farther inland.) Another wrinkle, according to atmospheric scientist Michael E. Mann: Climate change modeling suggests that human-propelled global warming could lead to weaker prevailing winds and a jet stream tracking father north. And that appears to have been what led Harvey to park over southeast Texas and dump more than 40 inches of water in places rather than spreading the rain (and pain) around or drifting back out over the Gulf.

Trump flew to Corpus Christi early Tuesday for a personal look at the damage, caused primarily by winds and the surging Gulf. To his credit, the president opted not to visit Houston. Much of that area is still underwater, and a presidential drop-in would only tie up crucial assets necessary for rescuing people sheltering in sodden homes. But we hope that what he sees on his visit (or on TV) spurs some second thoughts about whether human activity — namely, the burning of fossil fuels — is creating a less habitable world. This week, with tens of thousands of people missing, stranded or in need of food, water or shelter, Texas Gov. Greg Abbott called Harvey “one of the largest disasters America has ever faced.”

Ironically, the president two weeks ago rescinded Obama administration standards requiring the federal government to assess and account for the impact of climate change when designing and building new infrastructure projects. Of course, that makes no difference to the current status of Houston, but Harvey’s terrible impact certainly spotlights the foolishness of ignoring climate change. Experts (ahem) in Trump’s own Pentagon know that climate change is real, and they recognize that more extreme heat, droughts, floods and famines threaten international stability while rising seas imperil military bases — especially, of course, naval installations. But rising seas also threaten civilian shipping ports, coastal neighborhoods and sensitive freshwater estuaries. Saline ocean water is already seeping into the Everglades, threatening the freshwater supply of millions of people in southern Florida. Infrastructure must be adapted to account for such changes. And not just in the U.S. Globally, populations in coastal zones are increasing faster than in inland areas, and many of the world’s megacities are built on coasts or in low-lying deltas.

This is the hot, hard reality the world faces, and as we’ve noted before, Trump, along with his Environmental Protection Agency Administrator Scott Pruitt, Energy Secretary Rick Perry and other proponents of increasing fossil fuel production, are leading the nation in a dangerous direction. This isn’t an issue of mere policy differences; their beliefs and agenda imperil the health and safety of the people they have sworn to protect. As difficult as it might be for someone so incapable of introspection and reevaluation, the president needs to understand that he has subscribed to fake science, and that he must alter his course. We remain optimistic that other actors — the nations of the world, states such as California and local governments, corporations and consumers — will continue to change their behaviors to help confront the problem. But this would be a far more winnable battle if the world wasn’t also forced to fight ignorance in the White House, and a president content to whistle past the flooded graveyard.

by: The Times Editorial Board