EDITORIAL IS THE PARIS CLIMATE ACCORD TOO LITTLE, TOO LATE? 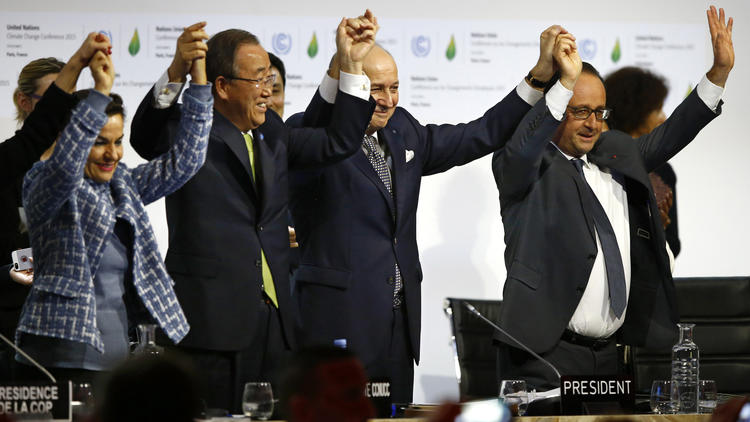 Representatives from more than 160 nations gathered at the United Nations on Friday to sign the accord they hammered out in Paris last December to reduce greenhouse gas emissions and slow the effects of climate change...

But is it too little, too late? The accord was an extraordinary achievement, but in the end, it was only a nonbinding agreement, and everyone understood that the real, daunting challenge would be in working together to meet the accord's stated goals.

And even that may not be enough. Experts have warned that the accord's goal of capping global warming at “well below 2 degrees Celsius” still might be insufficient to avoid a catastrophic rise in sea levels. What's more, the world is already experiencing more violent storms and cycles of drought and floods. The Paris accord came near the end of 2015, which was the warmest year earth has experienced since recordkeeping began in 1880. The first few months of 2016 have continued the upward trend — February's increase in temperatures over previous years was described by NASA officials as “a shocker.”

Then there's this problem: Neither of the leading Republican candidates for president — Donald Trump and Ted Cruz — even believes the conclusion reached by an overwhelming consensus of scientists that global warming, driven by human activity, is well underway. Both Hillary Clinton and Bernie Sanders, the Democratic contenders, accept that fundamental reality. Ohio Gov. John Kasich, the third Republican contender (barely) standing, has acknowledged global warming as real but has balked at some of the administration's tougher responses.

So what will be accomplished by the signing of the agreement in New York? That's unclear. The accord requires the signatory nations to develop plans for reducing greenhouse gases by 2030, but the plans unveiled so far fall short of what is needed. Their aggregate effect will only limit global warming to about 2.7 degrees Celsius at best. Because of that, the nations are supposed to update their plans every five years, beginning in 2020, to reach the less-than 2 degrees target. How they will reach that mark is crucial.

The U.S. has pledged to cut emissions to at least 26% below 2005 levels by 2025. But President Obama's Clean Power Plan, a linchpin of his climate change strategy, was derailed two months after the Paris accord was reached, when the U.S. Supreme Court halted implementation until legal challenges could be resolved. If it is ultimately tossed out, that would set back Obama's chances of reaching the nation's 2025 goals for reducing carbon emissions even though the administration has taken other steps, including a 54.5 mpg standard by 2025 for cars and light-duty trucks, limiting methane emissions from future natural gas and oil wells, and declaring a moratorium on new coal mining leases on federal land.

The U.S. Court of Appeals for the District of Columbia Circuit could speed things up by reaching a quick decision on the stalled Clean Power Plan after it hears the oral arguments that are scheduled for June. Still, if the fight goes to the Supreme Court, a final decision isn't likely until the next president takes office. If the Environmental Protection Agency prevails, states will still have time to meet the plan's deadlines for moving away from coal-fired energy production (which they should be doing even without the federal plan). If the regulations are shot down, the next president ought to work with Congress to achieve the same or an even more ambitious goal.

Unfortunately, climate change isn't waiting. As the global temperature rises, glaciers are retreating, shrinking polar ice is threatening Arctic species, river and lake ice has been breaking up earlier, plants and animals are shifting ranges, and flowering cycles for trees are occurring earlier in the season.

The signing of the accord, while historic, won't solve those problems. It merely starts the world on the right, though very belated, path. While ambitious, it is also cautious, and contains vague wording that the signatory nations pledge to “reach global peaking of greenhouse gas emissions as soon as possible.” The world needs to accelerate the pace. Slow and deliberate means lost species, drowned seaside cities, disappearing island nations and more political instability in the most affected nations.

Despite the urgency of the issue, discussion of climate change has been depressingly limited in the presidential campaign. Whoever wins the White House needs to recognize the enormity and gravity of the problem, and lead the way to a more habitable world.