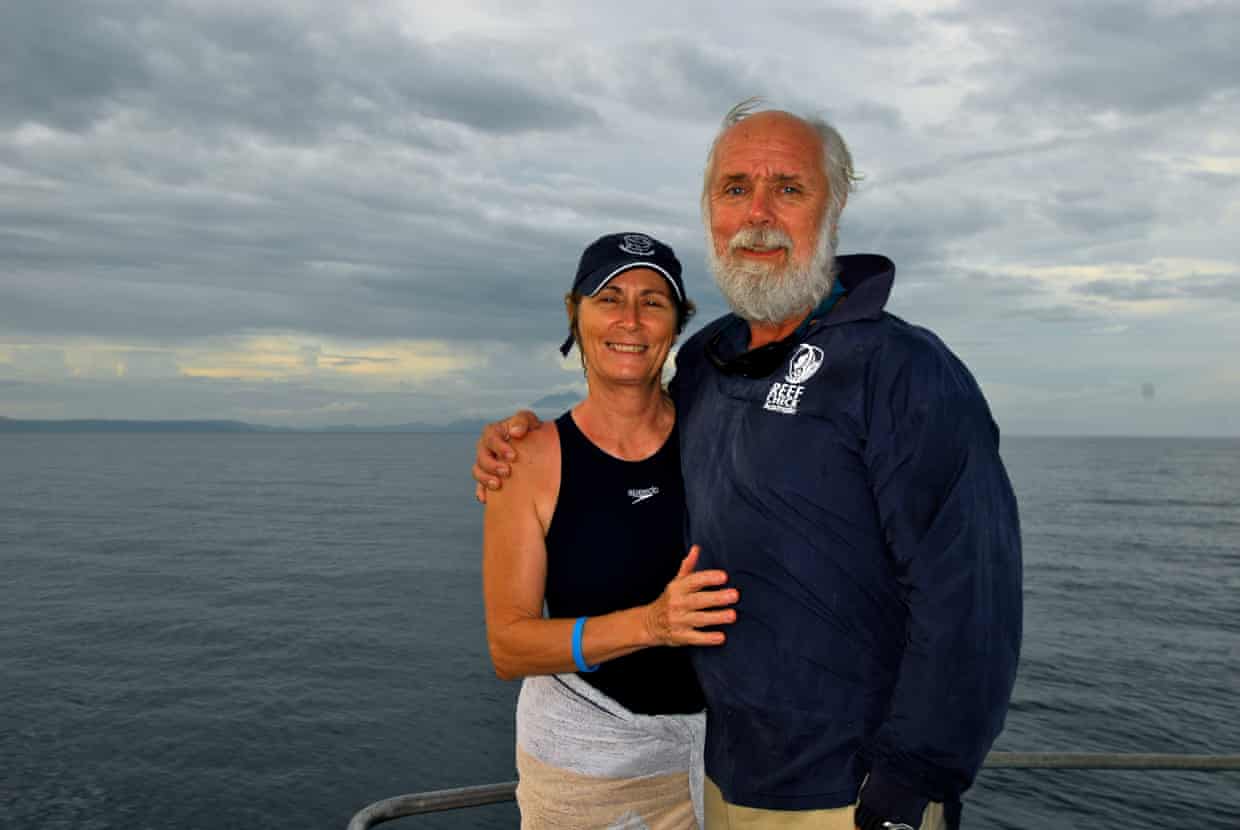 Months after the worst coral bleaching event to hit the reef, Australian conservationist Tim Flannery returns to a tourism hot spot 50km north-east of Port Douglas to witness the destruction wrought by a warming planet...

John Rumney says that just a year ago, this particular spot was once the most stunning coral garden on the entire Great Barrier Reef. If a film crew said it wanted to get a cliche shot of the reef with its mind-boggling richness of coral and fish species, this was where he took them.

Now he’s taking us there to see the destruction wrought by climate change. He says the fact this reef was used in so many films and magazines means it’s a perfect location to see the effects of the recent bleaching event.

He tells us he would regularly describe the location as having “more than 100% coral cover”. “It was growing on top of each other and underneath. It was just magnificent,” says Rumney, a veteran reef tourism operator, who helped pioneer ecotourism on the reef, and is now establishing a privately funded non-profit research enterprise, Great Barrier Reef Legacy.

“So we have a great baseline of what it was like. And it was absolutely fantastic,” says Rumney. “So anything that is damaged is directly proportional to this year’s bleaching. It’s not like it’s 50% dead and then you had bleaching so you don’t know what is old and new.”

Much has been written about the devastating global coral bleaching event that has snaked its way around the world since 2014, and which touched 93% of reefs on the Great Barrier Reef this year.

Surveys of the full impact suggest the worst impacts were in the remote northern third of the reef, far from where tourists regularly go. While almost a quarter of coral has been killed on the Great Barrier Reef, it has been concentrated in the area north of Port Douglas.

Despite that, the effects on this reef just 50km north-east of Port Douglas – the most popular launching point for reef tourism – have been severe.

Guardian Australia is here with the Climate Council, which visited this reef at the peak of the bleaching, in May, and has come back now to see how much has recovered.

Snorkelling on the outer reef where the water is crystal clear, it’s obvious what a vibrant reef it would have been just a few months ago.

While the seafloor is almost completely covered by coral, much of it is dead, covered with algae and starting to lose its structure. There are few of the fish that use coral as cover, but plenty of parrot fish and others that feed on the algae that is starting to cover the reef.

Tim Flannery, a prominent conservationist and a Climate Council councillor, visited this reef in May. “The coral wasn’t dead but it was severely damaged,” he says.

Although a proper study would be needed to make a full estimate of how much was bleached back then, Rumney and Flannery say it was in the order of 80% to 90%.

As would be expected in all but the most extreme marine heatwaves, most of the coral found bleached in May recovered.

Coral bleaches when the water around it is too warm for too long. The coral polyps get stressed and spit out the algae that lives inside it. Without the colourful algae, the coral flesh becomes transparent, revealing the stark white skeleton beneath.

Because the algae provides the coral with 90% of its energy, it begins to starve. Unless the ocean temperature return to normal within a month or two, the coral dies and gets taken over by a blanket of seaweed.

Now, upon Flannery’s return, the state of this particular reef has advanced to the point where it appears about 30% of the coral has died.

Emerging from the water, Lesley Hughes, another of the Climate Council’s councillors and an ecologist from Macquarie University, says it’s distressing to see so much death on the reef.

Related: Reef on the brink

Alongside the dead coral and algae, there appears to be an outbreak of the coral-eating crown-of-thorns starfish. Under dead, broken coral, groups of starfish congregate, munching on the remaining live coral.

“So all up it’s a pretty depressing site down there actually,” Hughes says.

The bleaching event was caused by unusually warm water. It was spurred on by El Niño, but the unprecedented level of heat was a clear sign the primary cause was global warming.

Video: Great Barrier Reef: diving in the stench of millions of rotting animals

“You’d be easily fooled into thinking this was some sort of natural event,” says Flannery. “But it has been caused by people. It’s the burden of greenhouse gases in the atmosphere causing these unprecedented underwater heatwaves that these ecosystems have just never experienced before and just have no capacity to absorb. The coral just dies.”

For Flannery, the dead coral is a stark reminder of the well-known response that is needed to climate change.

“If it was up to me and I was the Australian government looking at the loss of this asset, I would be announcing a plan to close down all of our coal-fired power plants over a given period of time, shift to clean energy, and do whatever it takes in the transport sector and so forth to make that transition,” he says.

“And then go to the international community and say ‘look, this global asset is in real danger, here’s what we’ve done to try and secure it, please join us to do your bit as well’.”

To head back to Port Douglas from the outer reef, we weave through the ribbons of reef that link together for hundreds of kilometres along the Queensland coast. As we approach the shore, a ship in the distance gets larger and larger and we slowly realise it’s a coal tanker.

Having collected its coal from one of the ports that dot the Great Barrier Reef, it’s delivering it to somewhere in the world – perhaps India or China – where it will be burned, create more greenhouse gases and further warm the atmosphere, making the next coral bleaching more likely.

• Michael Slezak and Josh Wall were guests of the Climate Council