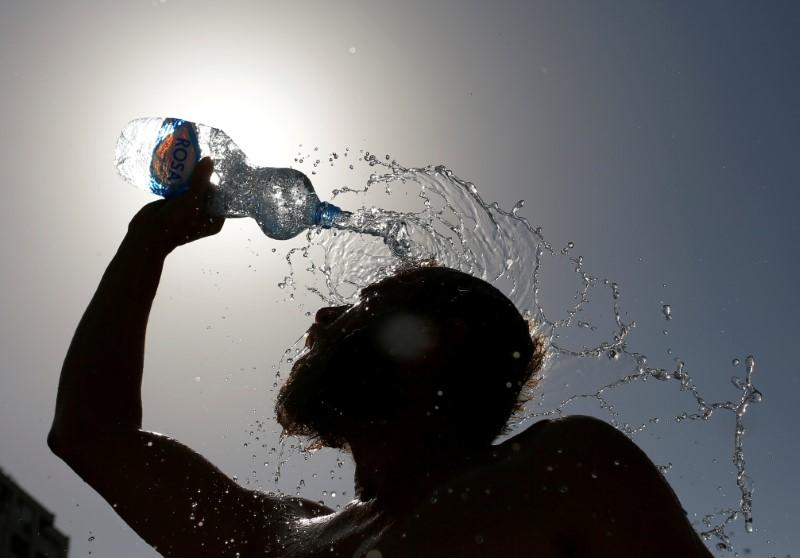 A man pours water on his face to cool off from hot weather in Skopje, Macedonia July 24, 2017. Ognen Teofilovski

Italy and the Balkans worst affected, though areas as far north as southern Poland also bask in abnormally hot temperatures...

(Job One Editor's Note: Lucifer??? Let's take this out of the spiritual realm and lay the blame where it should be! On the physical realm at the feet of man's greed and apathy! The "Devil Made Me Do It" excuse is not going to save the planet or the race of man... Actually, the planet will be here long after we are gone. IMHO I think we need a TILT!!! "Game Over" play again. There will be a few million left with sticks and stones that will rebuild our race and hopefully they will learn from their greedy, inconsiderate ancestors and build an earth that John Lennon imagined about... Don't like that scenario? Then check out alternative... http://www.joboneforhumanity.org/climageddon )

At least two people have died from the heat - one in Romania and one in Poland - and many more have been taken to hospital suffering from sunstroke and other heat-related conditions.

In Albania, 300 firefighters and soldiers struggled to contain as many as 75 forest fires and the country asked the European Union for emergency help. Firefighters were also busy in Serbia, Bosnia, Macedonia and Croatia.

With temperatures expected to stay around 40 degrees Celsius into next week, authorities advised people to increase their water intake and Red Cross volunteers across Europe visited the homeless and elderly and other people at risk.

"This prolonged period of extremely hot weather is particularly dangerous for people with existing health problems such heart conditions, high blood pressure and asthma, as well as older people and children," said Jeya Kulasingam, health coordinator for the International Federation of the Red Cross and Red Crescent Societies in Europe.

"It is vital that people stay hydrated and drink plenty of water, keep out of the sun and avoid over-exertion."

Wine growers in Italy have started gathering the grape harvest weeks earlier than usual due to the extreme heat.

Carlo Petrini, founder of the Slow Food movement, wrote in La Stampa newspaper that the grape harvest had never started before Aug. 15 in living memory.

"The health of the grapes is severely tested by this weather," Petrini wrote, adding that growers ran the risk of finding the fruit "cooked by the sun and the burning heat".

Italian authorities have issued weather risk warnings for 26 cities, including tourist hubs Venice and Rome, where many of the fountains have been turned off due to a lengthy drought.

The world-famous Uffizi art galleries in Florence had to shut temporarily on Friday when the air conditioning system broke down, their director told ANSA news agency.

Bosnian officials said the heat wave and drought had nearly halved agricultural output, which accounts for 10 percent of the country's economic output. Neighbouring Serbia reported a similar situation and experts said drought could slash corn and soybean production by a third.

Temperatures along parts of Croatia's Adriatic coast, including the major tourist hub of Dubrovnik, already stood at around 32 degrees early on Friday morning and were expected to nudge up to 42 degrees during the day, the weather service said.

"In two hours of my shift today I saw four people fainting on the street and complaining of heat exhaustion," a traffic warden who identified himself as Goran told Reuters in the Serbian capital Belgrade.

By Maja Zuvela and Aleksandar Vasovic