On Christmas eve you eat a big dinner, with lots of seconds, gravy, ooey gooey sweet potatoes with more sweet than potatoes. After the monster dinner, generous helping of pie, ice cream and lots more. You weigh yourself after the “dinner”. The next morning you find creative ways to get rid of the food you “ate” the night before, all of it (and more) ending up in the “waste” bin. You weigh yourself again, for comparison.

Hurrah, a new weight-loss technique. How to lose 5 lbs. (or more) in one delightful day. For the next month you note that you have not gained a single ounce since that gorging Christmas dinner. In fact, you’ve managed to keep your weight below the Christmas-eve measurement. Weight-loss is easy: just push your weight up momentarily to some unsustainably high weight, and then eat a more modest diet thereafter.

This tale would seem absurd, except this is exactly what educated, well-paid senators of the USA say on a regular basis. They substitute 1998 (the year of a monster El Nino) for Christmas dinner, they substitute temperature for body weight, and then say “No warming in __ years”, and neglect to note that the start of the “arbitrary” time period they’ve chosen was a monster El Nino. This Zombie Myth keeps on walking, eating the brains of many, despite the fact that we’ve notched record warm years 3 years in a row (i.e., 2014, 2015, and 2016). With the record warmth we’ve had, it’s possible we’re in the middle of the next Christmas “Dinner”.

Our bodies and the earth go through many cycles. We drink a cup of coffee, gaining a small amount of weight, and then a couple of hours later we lose that weight. We eat a meal, and then within 24 hours we lose the weight of that meal. We drink, we sweat. We eat, we burn calories by maintaining our bodies. We eat a lot, we exercise a lot. Our bodies have cycles that last hours, days, weeks, months, and one of the longest cycles that lasts nine months. We have random cycles associated with illness that also affect our weight. We know that the ups and downs of our weight due to these cycles has nothing to do with our average weight. In addition to all of these transient cycles, there may be an underlying, long-term weight gain or loss that requires long-term weight measurements to separate from the “noise” of the other cycles. One reason that Weight Watchers encourages its members to weigh themselves once/week at the same time of day is to minimize false readings due to the effects of hourly and daily cycles. A more accurate method for monitoring weight would be to weigh ourselves every day at the same time of the day and then average all 7 numbers to get a weekly average, but that is more work than a lot of people will tolerate.

One of the strongest cycles is associated with ocean currents, such as El Nino and La Nina. El Nino is a set of conditions that bring warm ocean water to the surface, releasing large amounts of energy from the ocean to the atmosphere, causing warming of the air. La Nina is the opposite, creating a set of conditions that tend to bring cooler ocean waters to the surface, causing cooling of the air. El Nino conditions can cause global average temperatures to “temporarily” increase by about 0.2C, but usually when the El Nino subsides, the air temperatures cool off. Typically neither the temperature increase of El Nino nor the temperature decrease after El Nino or during La Nina are indicative of long-term trends in average global temperature, but instead simply represent a temporary increase or decrease of global average temperature.

The exception to this is that during extended periods between El Ninos when the ocean currents keep relatively cool water on the surface, much heat goes into the oceans. During subsequent El Ninos, much of the heat stored in the oceans during the cooler phases comes out, causing a step increase in global average temperature. El Ninos can therefore mark a sudden increase in temperature, but what they are doing is releasing energy from the oceans that has been stored continuously over many years. Therefore, the best way to look at long-term trends of atmospheric air temperatures is to plot data over many decades: looking at temperature data over time periods of 10 years or less can lead to erroneous conclusions, such as “global warming has stopped.” To see how this works, consider the GISS temperature record, created by SkS to show how embedded within a trend of rising temperature there are periods of apparent cooling.

The "Faux Pauses" result because of cherry picking the data. Just like weighing yourself after going to the bathroom and being concerned that you have lost weight. 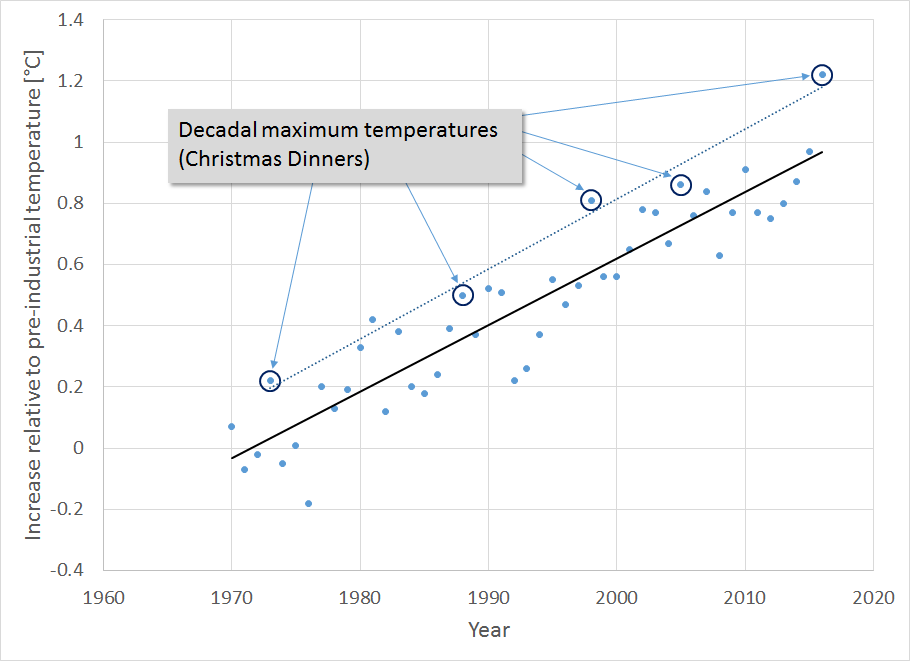 The climate is warming. Increased temperatures are dangerous. CO2 is the cause. The solution is to emit less CO2 and other greenhouse gases.