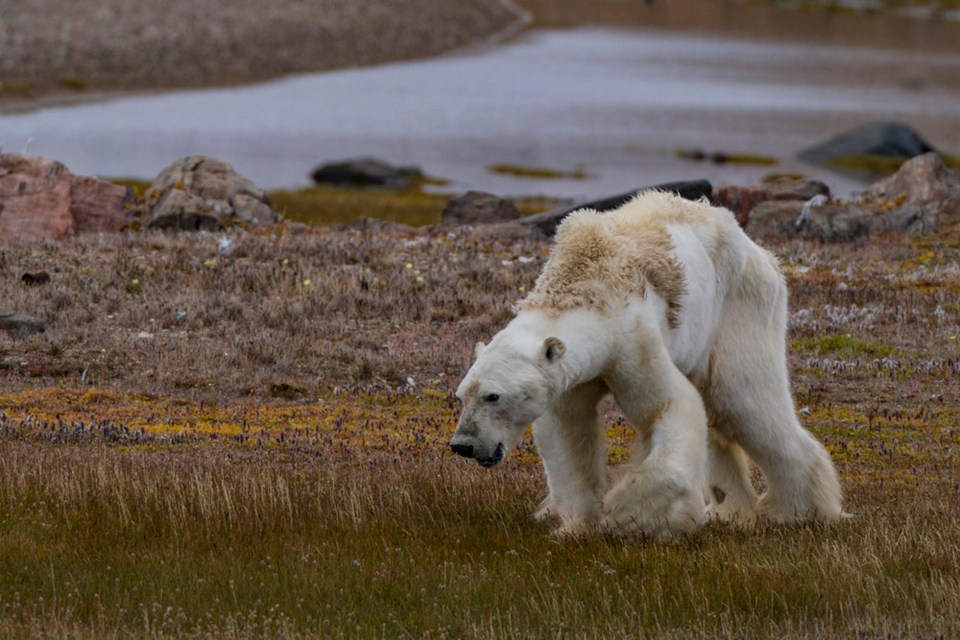 Video footage captured in Canada’s Arctic has offered a devastating look at the impact climate change is having on polar bears in the region, showing an emaciated bear clinging to life as it scrounged for food on iceless land...

The scene was recorded by the conservation group Sea Legacy during a late summer expedition in Baffin Island. “My entire Sea Legacy team was pushing through their tears and emotions while documenting this dying polar bear,” photographer Paul Nicklen wrote on social media after publishing the footage this week.

The video shows the bear struggling to walk as it searches for food. The bear eventually comes across a trashcan used by Inuit fishermen, rummaging through it with little luck.

The bear, which was not old, probably died within hours of being captured on video, said Nicklen. “This is what starvation looks like. The muscles atrophy. No energy. It’s a slow, painful death.”

The film-makers drew a direct line between the bear’s state and climate change. “As temperatures rise and sea ice melts, polar bears lose access to the main staple of their diets – seals,” the video noted. “Starving, and running out of energy, they are forced to wander into human settlements for any source of food.”

paulnicklen Verified
Baffin Island
Follow
1.2m views
17.2k comments
My entire @Sea_Legacy team was pushing through their tears and emotions while documenting this dying polar bear. It’s a soul-crushing scene that still haunts me, but I know we need to share both the beautiful and the heartbreaking if we are going to break down the walls of apathy. This is what starvation looks like. The muscles atrophy. No energy. It’s a slow, painful death. When scientists say polar bears will be extinct in the next 100 years, I think of the global population of 25,000 bears dying in this manner. There is no band aid solution. There was no saving this individual bear. People think that we can put platforms in the ocean or we can feed the odd starving bear. The simple truth is this—if the Earth continues to warm, we will lose bears and entire polar ecosystems. This large male bear was not old, and he certainly died within hours or days of this moment. But there are solutions. We must reduce our carbon footprint, eat the right food, stop cutting down our forests, and begin putting the Earth—our home—first. Please join us at @sea_legacy as we search for and implement solutions for the oceans and the animals that rely on them—including us humans. Thank you your support in keeping my @sea_legacy team in the field. With @CristinaMittermeier #turningthetide with @Sea_Legacy #bethechange #nature #naturelovers

The association echoed a 2015 study from the International Union for the Conservation of Nature that ranked climate change as the single most important threat to the world’s 26,000 polar bears. Researchers – who described the bears as the canary in the coal mine – found a high probability that the population would decrease 30% by 2050 due to the changes in their sea ice habitat.

As climate change boosts Arctic temperatures, sea ice – crucial to the bears for hunting, resting and breeding – is melting earlier in spring and refreezing later in autumn. The growing number of ice-free days could push the species past a tipping point with widespread reproductive failure and starvation in some areas, the report noted.

Satellite data published last year revealed that the number of ice-covered days across the 19 Arctic regions inhabited by polar bears declined at a rate of seven to 19 days per decade between 1979 to 2014.

Since posting the footage, Nicklen has been asked why he and his team did not help the bear. “Of course, that crossed my mind,” he told National Geographic. “But it’s not like I walk around with a tranquilizer gun or 400 pounds of seal meat.” Feeding polar bears is also illegal in Canada.

“There was no saving this individual bear,” he noted on social media. Instead he highlighted the threat facing the species as a whole, which has become emblematic of the ravages of climate change. “The simple truth is this – if the Earth continues to warm, we will lose bears and entire polar ecosystems.”