VOICES OF AMERICA, CLIMATE CHANGE: THE MISSING ISSUE OF THE 2016 CAMPAIGN... 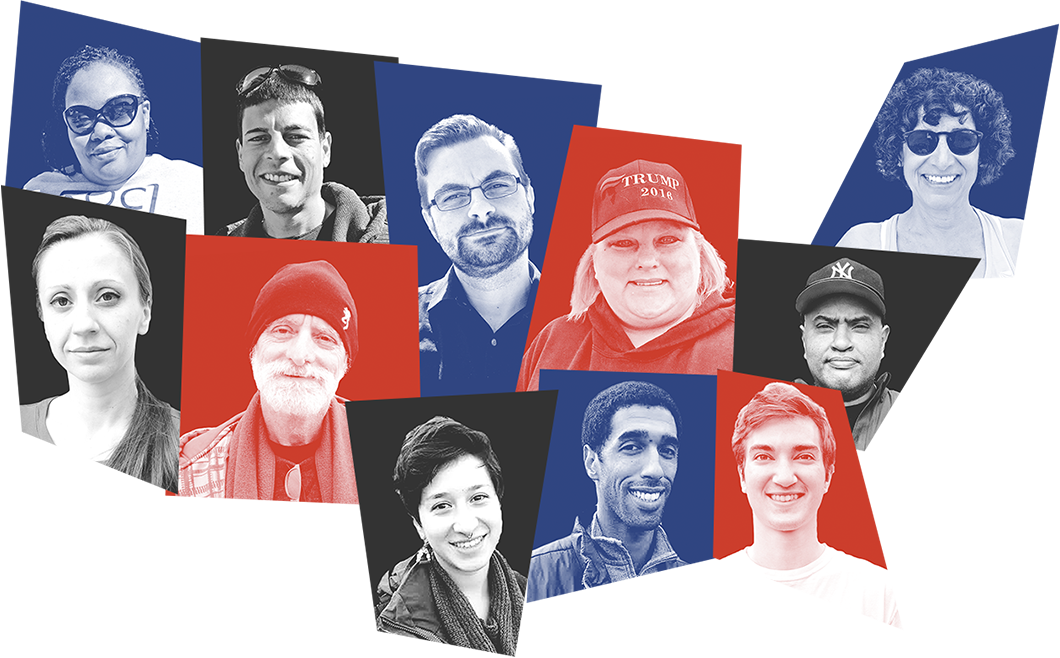 Guardian US survey reveals anger of voters as election year debate fails to deal with concerns over the gathering global disaster..

The race for the White House is failing to grapple with the key issues of the day, especially the urgent need to combat climate change before atmospheric changes become irreversible, a slice of the American electorate believes.

As the primary election season turns toward a head-to-head between Hillary Clinton and Donald Trump, there is increasing anger and frustration over the nature of the contest. A Guardian call-out to online readers in the US asking them to reflect on the race so far was met by a barrage of criticism on the tone and substance of the world’s most important election – with the two main parties, individual candidates and the media all coming under heavy fire.

The Guardian asked readers to identify the “one issue that affects your life you wish the presidential candidates were discussing more”. Resoundingly, the largest group of participants pointed to climate change.

Of the 1,385 who responded to the call-out – from all 50 states – one in five expressed discontent at the relative silence from candidates around a subject that they believed to be of supreme and epochal importance. They noted that much of the Republican debate has either focused on blatant denial that climate change even exists or on how to unpick Barack Obama’s attempts to fight global warming, while on the Democratic side both Hillary Clinton and Bernie Sanders have raised the issue but have rarely pushed it to the top of the political agenda.

Many of the respondents vented despair at a political system that in their view allowed a matter of such overwhelming significance to be so overlooked. “The fact that no one is really talking about climate change, to me, is indicative of just how lost we are,” said Linda Hayden, 51, from Oregon. “Our house is on fire and we are arguing about who is more angry!”

Vivid words and phrases were used to articulate the scale of the pending disaster that readers accused the presidential hopefuls of ignoring, such as “cataclysmic”, “running out of time”, “threat to human life”, “path towards destruction”, or in one particularly memorable remark: “slow-motion apocalypse”.

A reader from Alaska, a state acutely feeling the impact of climate change, used the word “Doomed!”, while an 18-year-old woman from Tennessee who asked to remain anonymous simply said: “Freaking global climate change.” Jennie Ratcliffe, 66, from North Carolina quibbled with the Guardian’s wording of the question, saying “this is far more than an ‘issue’ – it’s a crisis”.

“I’m a climate scientist, and almost no one in the general public knows just how serious and urgent this really is,” said Peter Kalmus, 41, from Altadena, California. “Not only is it real – it’s terrifying.”

The concerns of voters came to light as part of the Guardian’s Voices of America series which aims to highlight the way key issues have been ignored or under-played during a primary season when trivial personal attacks seemed to take precedence over substantial debate of issues that matter. 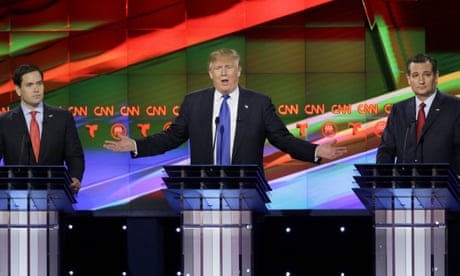 The Guardian call-out was not a poll, and as such was not a controlled survey of opinion. But it does illuminate a largely hidden depth of concern, particularly among liberal Americans, about a gathering global disaster that has tended to be discussed, if at all, at the fringes of the presidential debate.

Most of the respondents were liberal-leaning. About 80% said they planned to support a Democratic candidate – by comparison, around 31% of Americans overall describe themselves as Democrat (a higher 49% if you include those who say they are “Democrat-leaning”).

That disparity is likely to have influenced the fact that climate change was top of the pile of priorities for those who participated – only 19 of the 284 respondents who mentioned climate change said they were unaffiliated to a party and just two described themselves as Republican.

This ideological gap also plays out in public opinion research which uses a nationally representative sample of respondents. Last year, Pew Research Center found that 76% of liberal Democrats said that “global warming is a very serious problem” compared to 14% of conservative Republicans.

That is perhaps a reflection of a fundamental disagreement among Americans about the reasons for, and even existence of, climate change. Pew found that 64% of Democrats believed global warming was caused by human activity while only 22% of Republicans agreed.

A reader voices her concerns with climate change.

Participants in the Guardian project reserved their greatest ire for those Republican candidates who have expressed skepticism on the campaign trail that human-induced climate change exists at all. Among prominent GOP contenders, Ben Carson, Ted Cruz and Marco Rubio all cast doubt while they were running on climate change science while Jeb Bush, Carly Fiorina, John Kasich and Rand Paul argued against the need for urgent action to tackle the problem.

The presumptive Republican nominee, Donald Trump, has said he is “not a great believer” in man-made climate change, suggesting it is a hoax put about by the Chinese. When he set out his energy plan, he promised to cancel the Paris climate agreement that commits countries to reduce levels of polluting emissions.

Anthony Friedline, 31, of Camp Hill, Pennsylvania, was one of many respondents who expressed frustration at how the subject had been treated during the presidential TV debates: “One party thinks it is a hoax, and on the other side no one wants to discuss it except Bernie Sanders who the media doesn’t want to give the time of day because he isn’t part of the ‘establishment’. Who cares about ‘establishment politics’ when the fate of the whole damn planet is in our hands and we, apparently, are going to do nothing to fix it?”

Forest Menke-Thielman, 32, from Oregon, wrote that “the Republicans still haven’t admitted climate change exists, but even Democrats are not making it a priority like they should. Bernie Sanders and Hillary Clinton have mentioned it, but are not prioritizing it enough. All the candidates act as if this isn’t happening, and everyone knows that it is. Let’s get real folks!”

The strikingly bleak view of so many American voters towards the presidential election process chimes with the dismay of prominent environmental groups and campaigners who had hoped that the race for the most powerful job on earth would become a channel for serious discussion about how to tackle climate change.

Michael Brune, executive director of the 2.4 million-strong Sierra Club, America’s largest environmental movement, said: “Our members are in shock right now about Donald Trump – they are asking how we got to this point and what must be done to stop him becoming president.”

Brune added: “We feel it’s unconscionable that the overwhelming coverage has focused on the size of Trump’s hands or how he belittles his opponents, as opposed to how our civilization will be powered and climate change averted.”

The climatologist Michael Mann, who is director of the Earth System Science Center at Pennsylvania State University, said he did believe that Clinton and Sanders had engaged in meaningful dialogue about climate change, and pointed the finger of blame at the media for failing fully to reflect that. He added that as the general election gets underway he hoped there would be more focus on “substantive and critical differences in the views of the candidates, and less focus on frivolous and prurient matters that serve as little more than distraction and misdirection”.

The co-founder of the climate campaign 350.org, Bill McKibben, who Sanders has appointed to the platform committee at the upcoming Democratic national convention, struck a positive note by pointing out that in the 2012 presidential race between Barack Obama and Mitt Romney, climate change was not raised at all until just days before the election as a result of Hurricane Sandy. “This time around, whoever the Democrat is will be hammering Trump and the rest of the GOP for their blindness to climate science – it’s now a losing proposition for them. So, scientists and movements have done their job in that way.”

But he went on to warn that “merely believing in climate change at this point is way too low a bar. We need leaders who understand it’s the issue of our century, and will work with the focus it requires.”

Climate change was the most prominent among a host of different political concerns that respondents to the call-out complained were being insufficiently aired during the election. Accounting for one in 10 responses, the next most common group of worries related to tax reform, income inequality and poverty . Similarly high were mentions of campaign finance and corruption in politics, those too made up around one in ten responses.

Insecurity was a theme in many of the responses – 8% of respondents said they wanted leaders to focus on foreign policy while 7% said job security.

Most of our respondents skewed towards the Democratic party. Amongst those who were explicit, 577 said they were Bernie Sanders supporters while just 53 said they were voting for Hillary Clinton. A further 81 respondents saying they would vote for Trump.

by Ed Pilkington and Mona Chalabi

Tuesday 5 July 2016 07.30 EDT
source: https://www.theguardian.com/us
original story HERE
To see our most current positions, opinions, comments, agreement or disagreement with this article, and/or possible criticisms related to the subjects or facts raised in the above article, click here.  Then look for those subjects in the navigation links at the top the page. To learn about more about global warming, climate change or greenhouse gases as well as the causes, consequences, solutions, definitions, facts and tipping points related to these subjects, click here.
To automatically be emailed a summary of the latest news on global warming, sign up for our Global Warming Blog by clicking here. (Put your email address in the Global Warming Blog Subscribe box at the bottom right of the page.)
To sign a critical petition for declaring a national and international global warming State of Emergency, click  here!