THE JERSEY SHORE WOULD RATHER FIGHT FLOODING WITH WALLS THAN RETREAT... 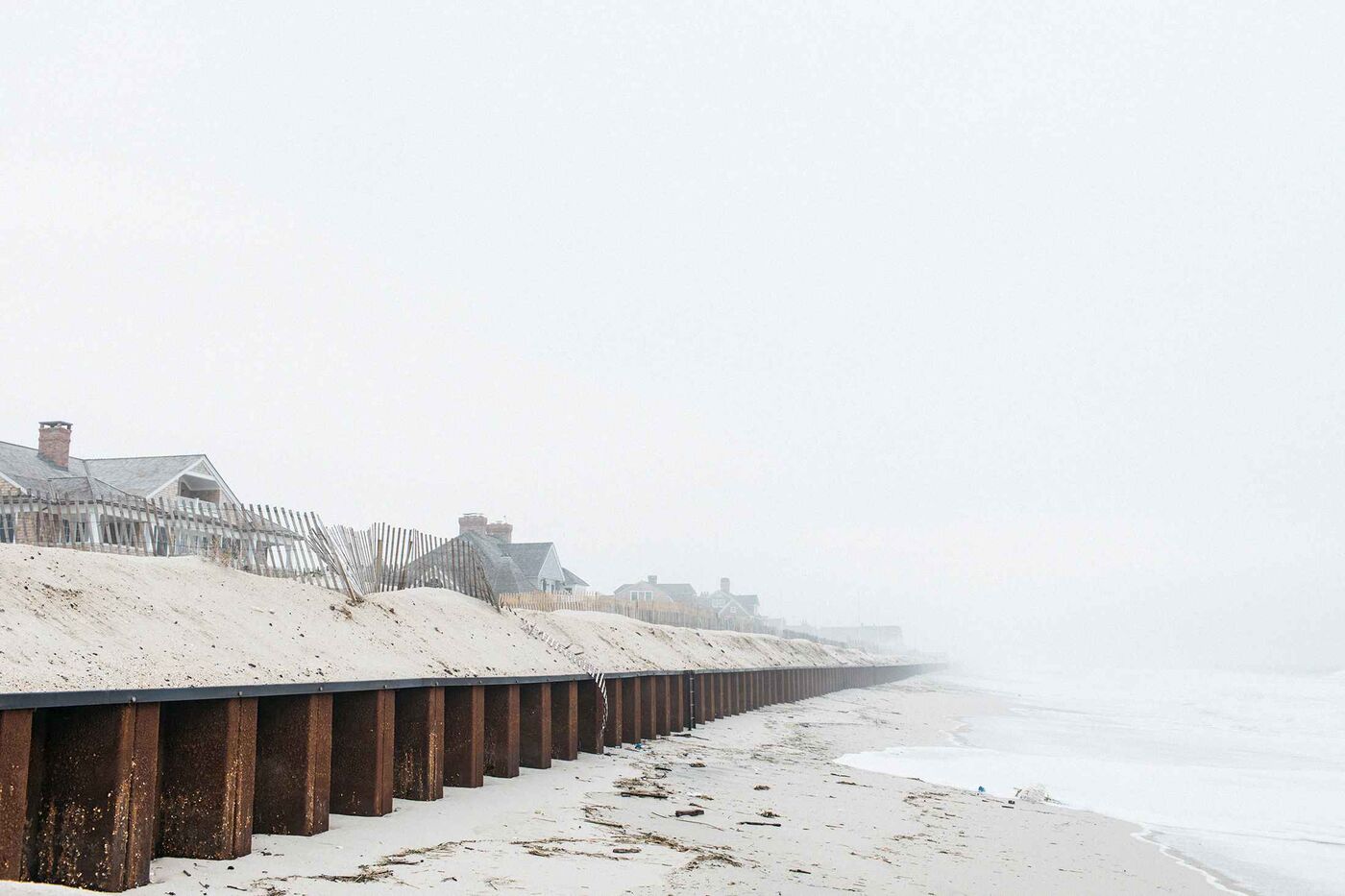 New Jersey built this 3.5-mile, $23 million steel wall in Mantoloking after Hurricane Sandy. The state initially closed that section of the beach, amid worries somebody would fall off. Photographer: Katrina d’Autremont for Bloomberg Businessweek

The state’s $300 million fund to get coastal homeowners to relocate inland isn’t working...

On a recent rainy afternoon near the Jersey Shore, John Spodofora, the mayor of Stafford Township, stood at the edge of the water and pointed to a spot in the salt marsh where he wants to build a giant berm to blunt the force of hurricanes. Stafford is on the western side of Barnegat Bay, the 40-mile body of brackish water north of Atlantic City that’s surrounded by blue-collar bungalows, cheap motels, and oceanfront mansions. In 2012, Stafford took a direct hit from Hurricane Sandy, which destroyed 3,000 of its homes. Rather than leave, most residents chose to rebuild.

The berm project would cost as much as $100 million, money the town doesn’t have. Spodofora is hoping the federal or state government will fund it, even though most of the 5,000 homes the berm would protect will likely be underwater in a few decades with or without it. Still, Spodofora is committed. “There’s no areas of my town that I can say aren’t worth protecting,” he says. 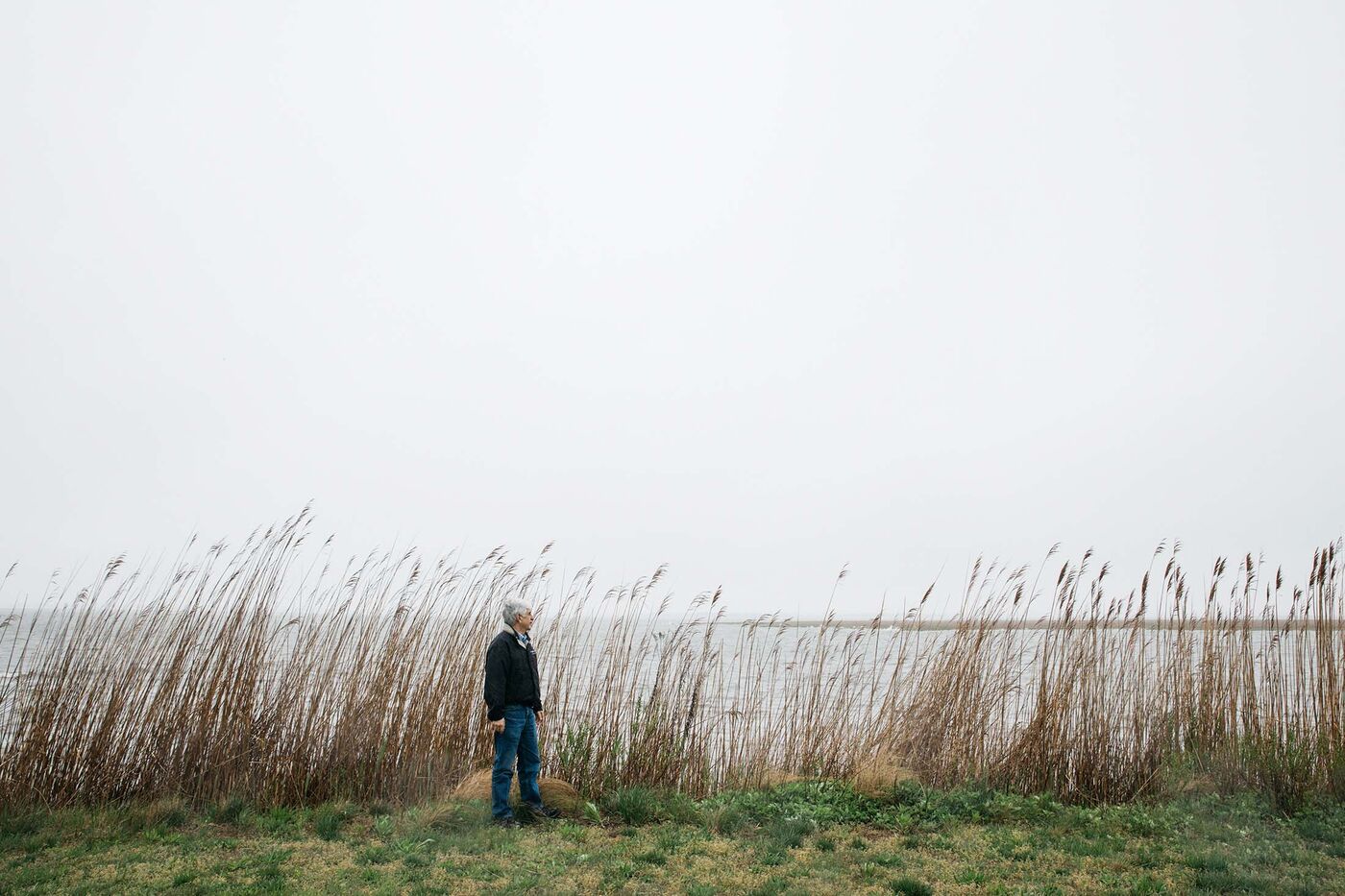 Mayor John Spodofora of Stafford Township shows where he wants to build a berm to protect his town against hurricanes. It could cost as much as $100 million. Photographer: Katrina d’Autremont for Bloomberg Businessweek

In coastal New Jersey, the debate about whether the climate is changing has been superseded by a more urgent question: What to do about it? While local officials such as Spodofora want to build walls against rising seas and fiercer storms, environmentalists say that delays the inevitable. The best policy, they say, is to encourage people to move inland and let the most vulnerable areas disappear into the water.

They may have found allies in the Federal Emergency Management Agency. After spending more than $278 billion on disaster relief over the past decade, the agency has begun to consider a change in tactics. In March, Bob Fenton, FEMA’s acting administrator, told a meeting of state emergency directors that governments need to find ways to reduce risk. “We need to move out of threatened areas,” he said. New Jersey shows just how hard that will be.

Sea levels along the Jersey coast are projected to rise as much as a foot by 2030 and close to 2 feet by 2050, according to a 2016 report by Rutgers University. By 2100, if greenhouse gas emissions continue at the current rate, more than three-quarters of the property, by value, in some towns will be underwater. “The only thing that’s going to be around in 50 years, on a high tide, are the bridges,” says Ken Able, director of Rutgers’s marine field station, housed in a converted 1930s U.S. Coast Guard station at the southern tip of the bay. Able says the road to the station floods so often that Rutgers will eventually have to move the building. 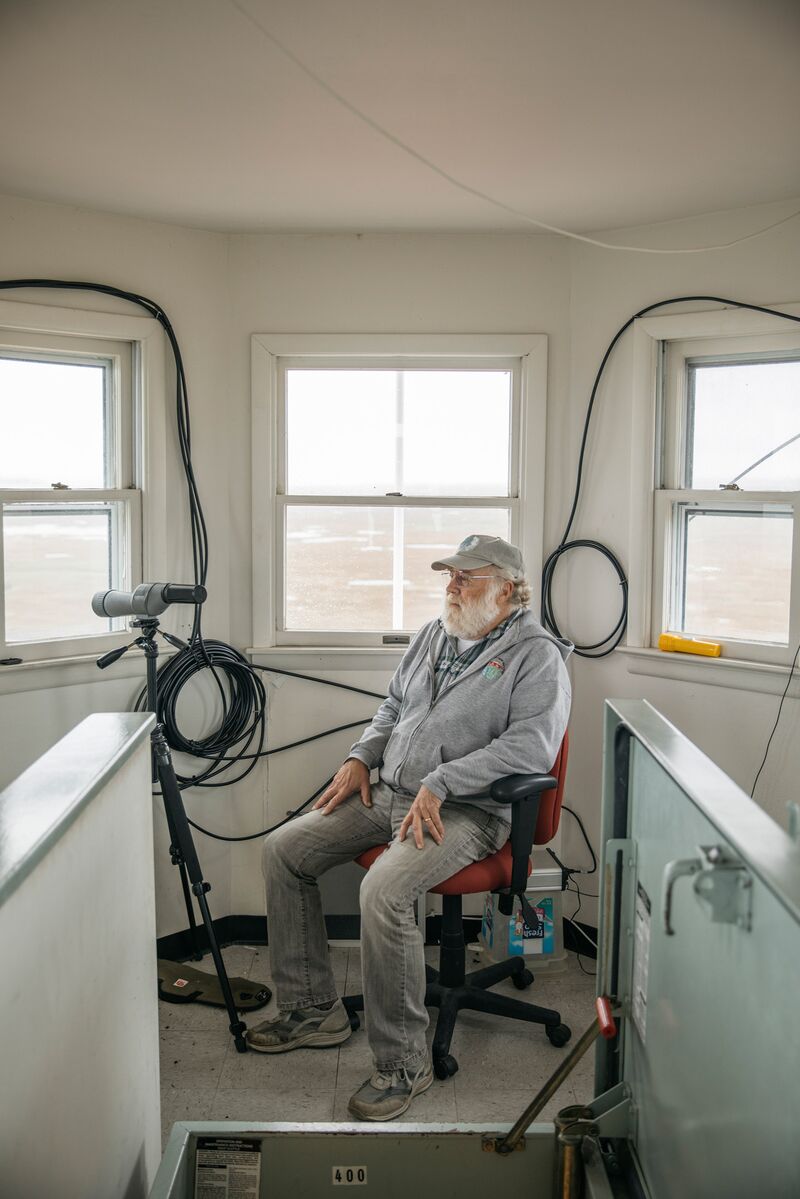 Ken Able, director of the Rutgers University Marine Field Station at the southern tip of Barnegat Bay. “The only thing that’s going to be around in 50 years, on a high tide, are the bridges.” Photographer: Katrina d’Autremont for Bloomberg Businessweek

On Long Beach Island, across the water from Stafford, Joseph Mancini, mayor of Long Beach Township, has told homeowners on the bay to expand the steel walls at the edge of their property, from 5 feet above the water to 7. “By raising the bulkheads 2 feet, I kind of figured we’d be good for 40-plus years,” says Mancini. But that just covers the bay side of town.

On the ocean side, the Army Corps of Engineers just finished a 14-mile, 300-foot-wide system of dunes and berms that cost $232 million, fully funded by the federal government. In May the Corps will start work on a second 14-mile dune-and-berm project north of here, with a total estimated construction and maintenance cost of $507 million. “It’s a hell of a deal,” says Mancini, who had to win over skeptical beachfront homeowners worried the dunes would spoil their ocean view. 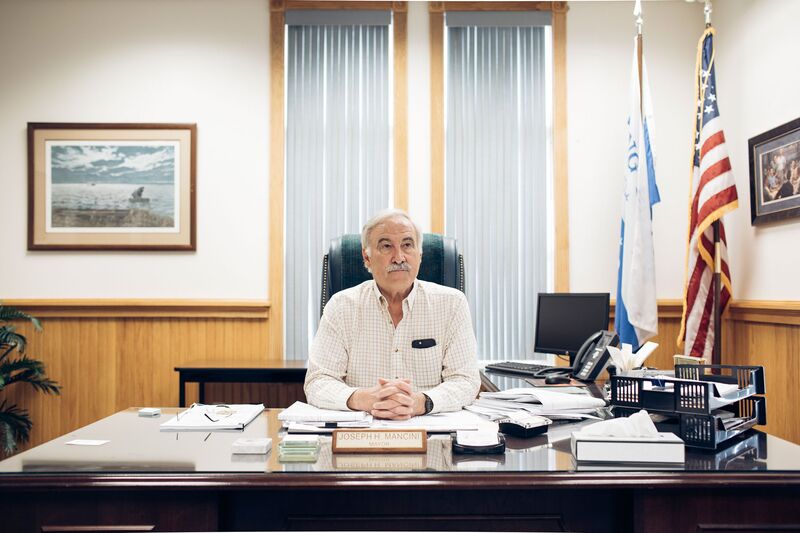 Mayor Joseph Mancini at his office in Long Beach Township. The federal government paid $232 million to protect his shoreline. “It’s a hell of a deal.” Photographer: Katrina d’Autremont for Bloomberg Businessweek

Tim Dillingham, executive director of the American Littoral Society, a New Jersey environmental group, says it’s a mistake to focus on building walls. For one thing, rising sea levels cause streets to flood from underneath as storm drains back up, which walls can’t prevent. Walls are expensive, they speed erosion of beaches, and, maybe worst of all, they create a false sense of security. “The fundamental ecological idea that people cannot get through their heads is that coastal systems are dynamic,” says Dillingham. “You cannot hold them in place, which is what all this is about—trying to hold them in place so we can have houses on them.”

He says a better solution is a deliberate retreat: emptying and demolishing homes in waves, gradually moving the edge of development backward as the water moves forward. Just as the wetlands migrate over time, so must the inhabitants. The trick will be persuading people to leave.

After Sandy, the federal government gave New Jersey $300 million to buy homes vulnerable to storms and flooding. Under the program, called Blue Acres, willing homeowners get the pre-Sandy value of their home, which is then demolished, leaving the land undeveloped. But for homeowners to participate, their local government needs to agree to take part. And so far, many haven’t. Four years after it started, Blue Acres has spent just half the money available. Around Barnegat Bay, it has yet to buy a single home.

Local officials offer different explanations for resisting. Mancini, whose other job is building houses, says homes in his town are too expensive to justify buyouts. Spodofora says his residents weren’t interested, and even if they were, the loss in property tax would hurt his budget. “Is the government gonna have to buy every piece of property?” asks Thomas Kelaher, mayor of Toms River, the largest city on the bay. “You either fortify yourself and stay or tell people to leave. And telling them to leave, I tell you, will never work.” 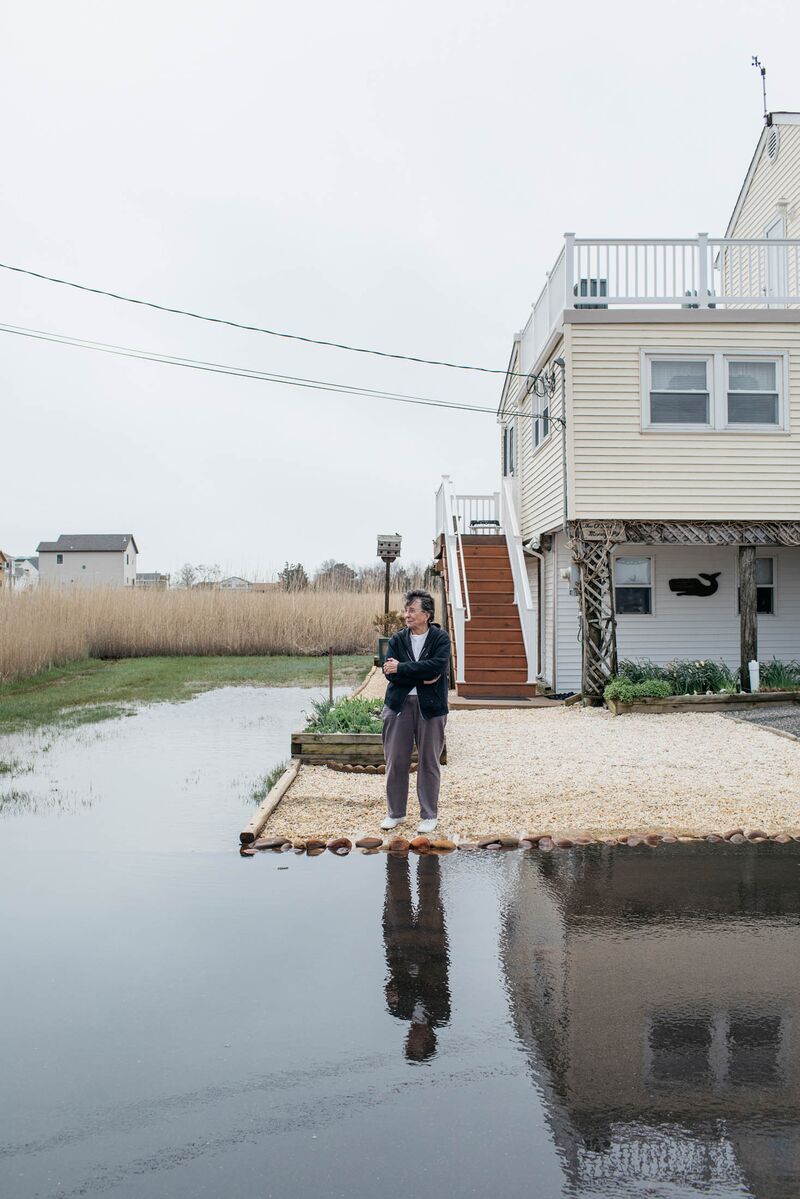 Maryann O’Neill in front of her house in Mallard Island. “This is minor tidal flooding,” she said. The neighborhood could be permanently underwater by 2030. Photographer: Katrina d’Autremont for Bloomberg Businessweek

The day after Spodofora toured his shoreline, parts of Stafford Township flooded. This happens more often than it used to. In the neighborhood called Mallard Island, a set of winding streets less than a foot above the bay, Maryann O’Neill describes the water that had completely submerged the area in front of her house as “minor tidal flooding.” O’Neill expects she’ll have to sell soon and worries the increased flooding will deter buyers. Across the street, Joe and Diane Rowan stood on the part of their driveway that wasn’t underwater and half-joked about reaching their house by kayak. Still, they say they’re not worried about the sea-level rise. “That’s so many years away,” says Diane. Projections from Rutgers indicate the neighborhood could be permanently underwater as soon as 2030.

Down the road, Jim Brennan sat in a plastic chair between the pilings holding up the house he’s lived in since 1970 and stared at the bay. He says it isn’t unusual to be stuck for days when the flooding gets bad. The town has tried to help, elevating roads and improving storm drains. But those steps only do so much. “It doesn’t change that,” says Brennan, pointing out at Barnegat Bay, its gray waters slowly rising, gathering force for the next storm.

The bottom line: More than four years after Sandy, coastal New Jersey is building walls rather than buying out owners of the most vulnerable homes.