(WHO'S LUBRICATING WHO?) THE WHITE HOUSE WAS ON THE SAME PAGE AS EXXONMOBIL ON MONDAY. LITERALLY... The White House and ExxonMobil were in sync Monday. Some might even call it a mind meld...

In a news release, ExxonMobil highlighted the oil giant’s plan to spend $20 billion over 10 years, build 11 chemical and natural-gas projects and create 45,000 jobs. Within the same hour, the White House put out its own statement claiming credit for the expansion and adding, “The spirit of optimism sweeping the country is already boosting job growth, and it is only the beginning.”

ExxonMobil spokesman Alan T. Jeffers said that the company had supplied the information to the White House.

The White House release quoted President Trump saying that ExxonMobil’s investment plan “is exactly the kind of investment, economic development and job creation that will help put Americans back to work.”

But Exxon’s investment plan was launched in 2013 — four years ago. And while the White House was hailing the investment program by ExxonMobil and talked about Trump’s “promise to bring back jobs to America,” General Motors on Monday announced the layoff of 1,100 workers in Michigan.

Some oil analysts were not impressed. “There is nothing new or newsworthy here,” said Pavel Molchanov, energy analyst with the investment firm Raymond James. “At the risk of stating the obvious, plenty of companies, across various industries, have been touting their U.S. job creation efforts in order to get on the Trump administration’s good side — even when the underlying job creation has little or nothing to do with Washington policy. This is simply the latest example of that.”

While spending $20 billion over 10 years is a huge commitment for most companies, it represents only 10 percent of ExxonMobil’s current capital spending levels. Those levels would probably increase with higher oil prices. Moreover, ExxonMobil has been a major operator and investor in the Gulf of Mexico region for decades. The gulf accounts for nearly a fifth of U.S. domestic oil production.

“ExxonMobil is strategically investing in new refining and chemical-manufacturing projects in the U.S. Gulf Coast region to expand its manufacturing and export capacity,” said the company’s news release, posted at 3:10 p.m. “The company’s Growing the Gulf expansion program, consists of 11 major chemical, refining, lubricant and liquefied natural gas projects at proposed new and existing facilities along the Texas and Louisiana coasts. Investments began in 2013 and are expected to continue through at least 2022.” 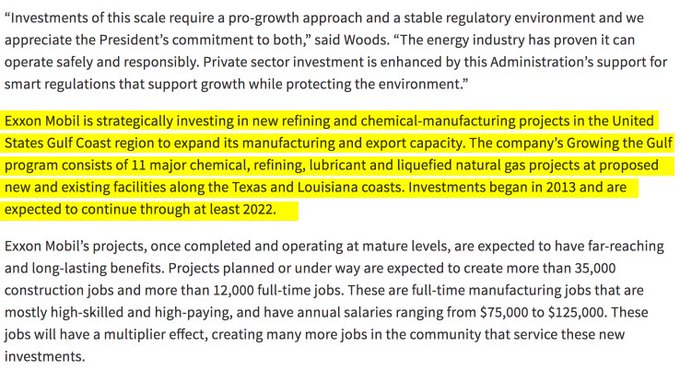 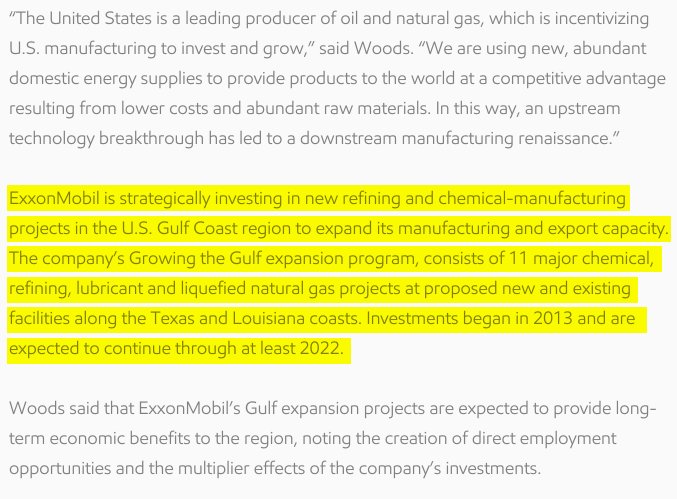 “Exxon Mobil is strategically investing in new refining and chemical-manufacturing projects in the United States Gulf Coast region to expand its manufacturing and export capacity,” said the White House’s news release, in which Trump is quoted as praising ExxonMobil for creating jobs. “The company’s Growing the Gulf program consists of 11 major chemical, refining, lubricant and liquefied natural gas projects at proposed new and existing facilities along the Texas and Louisiana coasts. Investments began in 2013 and are expected to continue through at least 2022.”

The two releases also shared another nearly identical sentence. “These jobs will have a multiplier effect, creating many more jobs in the communities that service these new investments,” Woods stated in the ExxonMobil news release. With only a slight change, that sentence appeared, unattributed to Woods, at the end of the White House news release.

Requests for comment to the White House were not answered.

ExxonMobil’s Jeffers said that “our goal today was to illustrate the very significant investment we are making in the region, creating thousands of jobs and billions in economic activity — all thanks to the shale revolution.”

In the White House video posted Monday on Facebook, the president takes credit for the oil behemoth’s investment program, the product of years of growth in U.S. shale gas supplies. At the 2013 CERAWeek conference, the company announced a multibillion-dollar expansion of its gigantic Baytown, Tex., refinery to “boost its capacity for turning natural gas into petrochemical building blocks.”

“This is something that was done to a large extent because of our policies and the policies of this new administration, having to do with regulation and so many other things,” Trump said Monday. “I said we’re bringing back jobs. This is one big example of it.” He added: “I want to thank very much ExxonMobil. Special company. Special people.”

By Chris Mooney and Steven Mufson March 6 at 6:48 PM