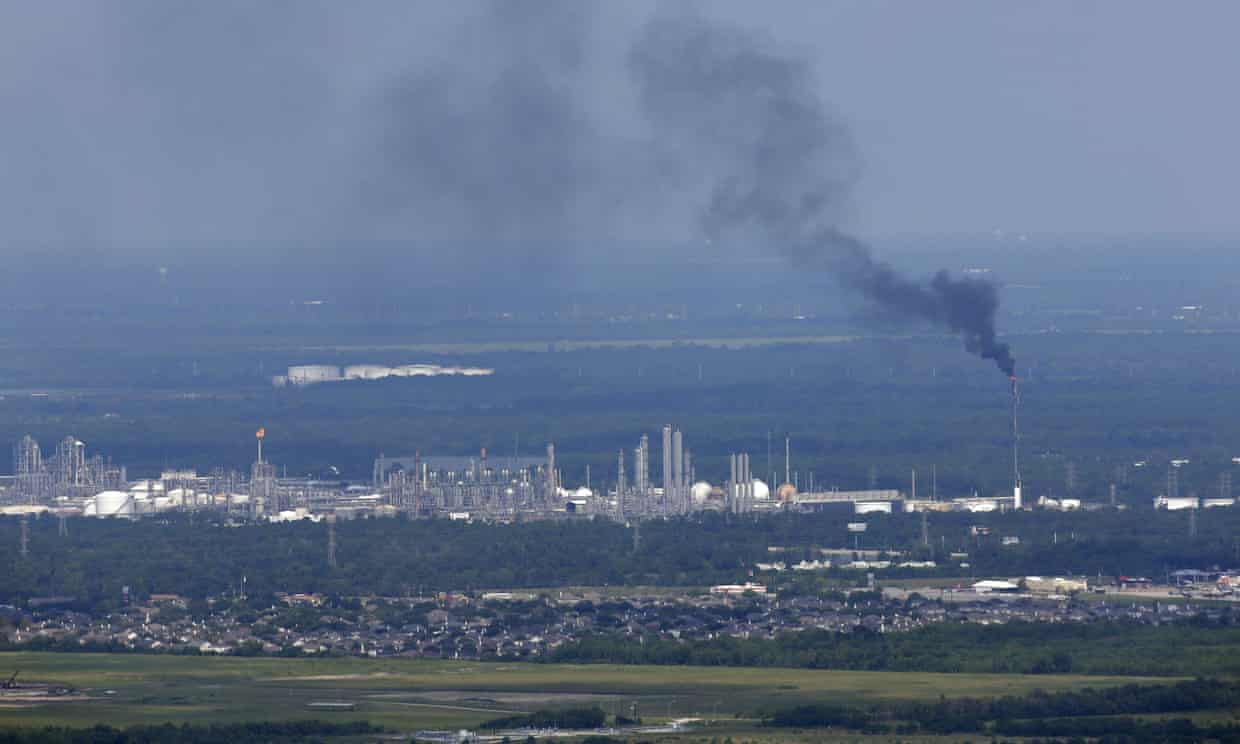 Hurricane Harvey has resulted in Houston’s petrochemical industry leaking thousands of tons of pollutants, with communities living near plants damaged by the storm exposed to soaring levels of toxic fumes and potential water contamination.

Refineries and chemical plants have reported more than 2,700 tons, or 5.4m pounds, of extra air pollution due to direct damage from the hurricane as well as the preventive shutting down of facilities, which causes a spike in released toxins. 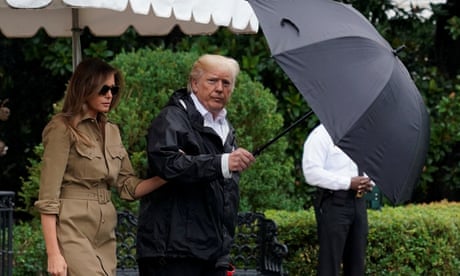 On Friday, ozone levels in south-west Houston were well above the national standard, triggering one of Texas’s worst recent smogs. Scientists warned that people outside cleaning up in the aftermath of Harvey were vulnerable to the poor air, particularly the elderly, children and those with asthma.

According to an analysis by the Center for Biological Diversity, a cocktail of nearly 1m pounds of particularly harmful substances such as benzene, hexane, sulfur dioxide, butadiene and xylene have been emitted by more than 60 petroleum industry plants operated by ExxonMobil, Shell, Chevron and other businesses since the hurricane.

Houston has not met national air quality standards since the introduction of the Clean Air Act in 1970 and the sudden surge in pollution has caused deep concern among public health advocates.

The released chemicals are linked, through prolonged exposure, to an array of health problems including heightened cancer risk, gastrointestinal ailments, nausea and muscle weakness. Residents living near the sprawling industrial facilities that dominate Houston’s ship channel said they have experienced pungent smells and respiratory issues in the wake of the hurricane.

“It feels like someone has a hand on the crest of your noses and is pushing down on your nose and eyes,” said Bryan Parras, who lives in the East End area of Houston. “You start to get headaches, your eyes start itching, your throat gets scratchy. I noticed it going outside for just a second. And then I realized that the air conditioning was sucking it into the house.”

Parras has worked for the past decade to highlight the pollution issues faced the overwhelmingly Latino and black communities living directly next to Houston’s petrochemical industry. While it is difficult to directly link air pollution in a particular area to a person’s illness, people along the ship channel have reported elevated levels of leukemia, asthma and other ailments.

“I grew up here and I remember being sick all the time,” Parras said. “I’m still pretty fucked up because of where I grew up and live. This hurricane has been devastating for these communities and it’s still playing out because we don’t know the full extent of it yet.

“The Latino community here is full of good people. They do the dirtiest jobs and they don’t ask for much and yet they are over-policed, criminalized and targeted. These people have very little political power and the city knows it. The real disaster is that they are poisoning these communities slowly, 24-7.”

Daniel Cohan, an air pollution expert at Rice University, said the emissions could be even greater than what the companies are reporting to regulators, given the difficulties in ascertaining exactly what has been leaked. Several air quality monitors were also rendered inoperable by the hurricane.

“The emissions could be many times higher,” he said. “A lot of the risks for carcinogens and neurotoxins come following exposure for a long time but the immediate concern is that people in the neighborhoods around the plants, a lot of low-income Hispanic communities, will suffer itchy eyes and throat complaints. The air will be unpleasant to breathe.

“It’s concerning how state policies allow enormous amounts of pollution during shut down and start up periods. I hope the next few days are the worst of it.”

The most spectacular industrial damage so far has taken place at the Arkema chemical plant in Crosby, Texas, where a number of explosions have been reported.

Many other petrochemical facilities have reported lesser but significant damage to their roofs and holding tanks from Harvey, the heaviest rain event in recorded US history. ExxonMobil had to shut down two facilities, with one damaged plant in Baytown releasing more than 12,500lbs of chemicals including benzene and xylene.

Fourteen plants, operated by firms including Shell and Dow Chemical, have also reported wastewater overflows following the hurricane. It’s not yet clear what volume of pollutants has been released, although some scientists are concerned the huge volume of water washing through Houston will carry high levels of toxins.

Along with its enormous petrochemical industry, Harris county, in which Houston sits, has more than a dozen superfund sites – federally designated toxic areas in need of cleaning up – that may also spread contamination.

The Associated Press reported on Saturday that it had visited five Houston-area suprefund sites and all had been inundated with water. 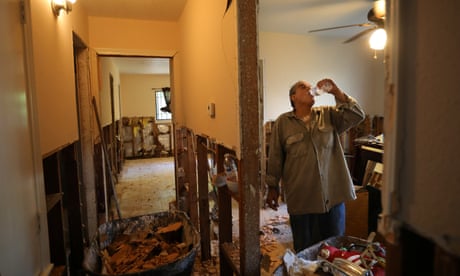 The US Environmental Protection Agency and the Texas Commission on Environmental Quality have said they have about 200 staff members working to monitor wastewater issues and safeguard drinking water.

“Floodwaters may contain many hazards, including bacteria and other disease agents,” the agencies warned in a joint statement. “Precautions should be taken by anyone involved in cleanup activities or any others who may be exposed to floodwaters.

“These precautions include heeding all warnings from local and state authorities regarding boil-water notices, swimming advisories, or other safety advisories.”

Many residents have been alarmed by the toxic impacts of the hurricane but are skeptical that their more chronic pollution problems will be addressed once the floodwaters from Harvey have receded.

Jessica Hultze, a retired woman who lives in Houston’s second ward district, a largely Latino area, said she had noticed a strong smell of gasoline that made her feel uncomfortable.

“This has been bad but it’s not going to get better, it’ll only get worse,” she said. “We all talk about how close we are to the refineries but for us there is no hope, we will die with this poisonous air. There are so many people around here with tubes coming out of their noses.

“I’ve been around for a few years and no one has listened to us. We are just the little people.”