A COMIC STRIP MIRRORS THE RAVAGES OF CLIMATE CHANGE... 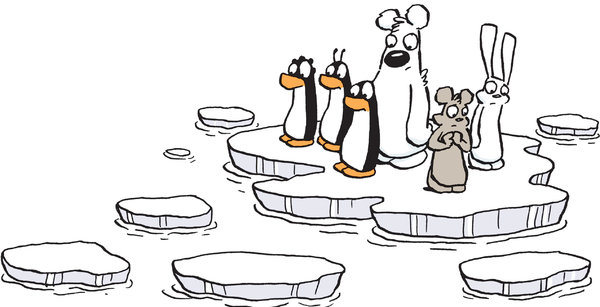 The cast of “Arctic Circle,” by the cartoonist Alex Hallatt, includes three penguins, a polar bear, a lemming and a bunny.
Alex Hallatt / King Features Syndicate
The newspaper comic strip “Arctic Circle,” by the environmentally minded cartoonist Alex Hallatt, is about talking penguins and their fellow creatures living in the north. Starting Monday, under a caption that says “An Inconvenient Truth,” the menagerie will find their world shrinking and their conversations will be about global warming...

Readers will see the drawings diminish to nothing by Friday as a snow bunny muses, “Climate change will lead to habitat loss and the extinction of many species.”

Miss Hallatt created the strips to observe the arrival of the documentary “An Inconvenient Sequel: Truth to Power,” in theaters on Friday. The film is a follow-up to the 2006 Oscar-winning documentary featuring Al Gore. Miss Hallatt has no official connection to the film.

“I was so excited when ‘An Inconvenient Truth’ was the success it was,” she said during a telephone interview. “Finally, finally climate change was now in the mainstream. In the intervening 10 to 11 years, it seems like we’re almost going backwards. It’s really, really frightening.”

She added: “The fact that there has to be a sequel does bother me. We shouldn’t even be discussing this.”

Tackling environmental issues is nothing new for Miss Hallatt, a former biochemist. Since it began, “Arctic Circle,” which has been syndicated by King Features since 2007, has covered topics like marine pollution, bird conservation and disappearing bees.

“Arctic Circle” will comment on climate change this week, timed to coincide with the sequel to “An Inconvenient Truth.”
Alex Hallatt / King Features Syndicate

“It’s not a political stance,” she said. “Climate change is about science. People see it as a partisan issue, but it is a science issue.”

Miss Hallatt, 46, said she never intended “Arctic Circle” to be an environmental strip, but she has been concerned about climate issues since childhood. She grew up in Dorset, England, during the oil crisis and remembers “always turning out the lights and driving my parents crazy.” Still, her work is not always about the weight of the world. Recent installments of “Arctic Circle” have depicted the penguins coping with social media and dating. And her web comic, “Human Cull,” is about making the world a better place by removing annoying people. One recent example: those who do not hold doors open.

When she has tackled politics in “Arctic Circle,” the response on message boards would sometimes get heated. “You get climate change deniers who post to those threads,” she recalled. “The lovely thing is that there will be rational responses from people who will explain the science to them so I don’t have to get involved.”

Peter Broelman, a cartoonist and a member of the Australian Cartoonists Association, said, “‘Arctic Circle’ takes the lead in openly discussing one of the main challenges to the planet and effectively uses humor to get across Alex’s concerns,” The association runs the Stanley Awards, and “Arctic Circle” has been nominated three times for one of the awards.

Miss Hallatt said she believed her strip was an ideal venue for discussing global warming.

“If you read the comics, they are all based on facts,” she said. “The only thing we don’t have are talking animals in the Arctic. Or penguins. They are immigrant penguins.”

“An Inconvenient Sequel” highlights some progress in dealing with climate change; Miss Hallatt said she believed that positive steps could be taken.

“The U.S. may have withdrawn from the Paris Agreement, but a lot of cities and states have said they are still part of it,” she said. “That’s the attitude for people to have. There’s a lot we can do, but we have to do it collectively.”