A FOOLS ERRAND? HOW BILL GATES AIMS TO CLEAN UP THE PLANET... 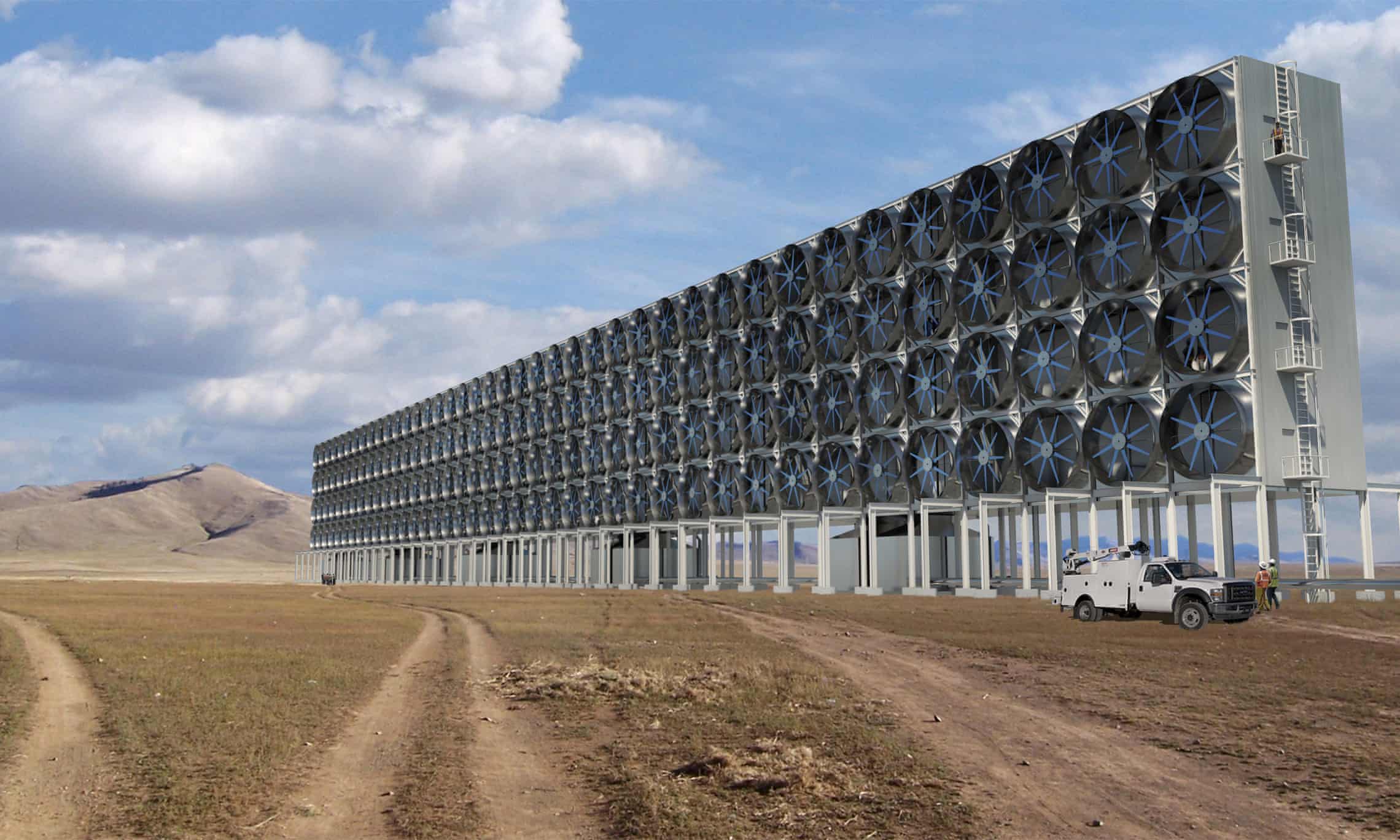 Carbon Engineering’s direct air capture plant in Squamish, British Columbia, one of the few such facilities in the world. Photograph: pembina.org

It’s a simple idea: strip CO2 from the air and use it to produce carbon-neutral fuel. But can it work on an industrial scale?

It’s nothing much to look at, but the tangle of pipes, pumps, tanks, reactors, chimneys and ducts on a messy industrial estate outside the logging town of Squamish in western Canada could just provide the fix to stop the world tipping into runaway climate change and substitute dwindling supplies of conventional fuel.

The idea is grandiose yet simple: decarbonise the global economy by extracting global-warming carbon dioxide (CO2) straight from the air, using arrays of giant fans and patented chemical whizzery; and then use the gas to make clean, carbon-neutral synthetic diesel and petrol to drive the world’s ships, planes and trucks.

The hope is that the combination of direct air capture (DAC), water electrolysis and fuels synthesis used to produce liquid hydrocarbon fuels can be made to work at a global scale, for little more than it costs to extract and sell fossil fuel today. This would revolutionise the world’s transport industry, which emits nearly one-third of total climate-changing emissions. It would be the equivalent of mechanising photosynthesis.

The individual technologies may not be new, but their combination at an industrial scale would be groundbreaking. Carbon Engineering, the company set up in 2009 by leading geoengineer Keith, with money from Gates and Murray, has constructed a prototype plant, installed large fans, and has been extracting around one tonne of pure CO2 every day for a year. At present it is released back into the air.

But Carbon Engineering (CE) has just passed another milestone. Working with California energy company Greyrock, it has now begun directly synthesising a mixture of petrol and diesel, using only CO2 captured from the air and hydrogen split from water with clean electricity – a process they call Air to Fuels (A2F). 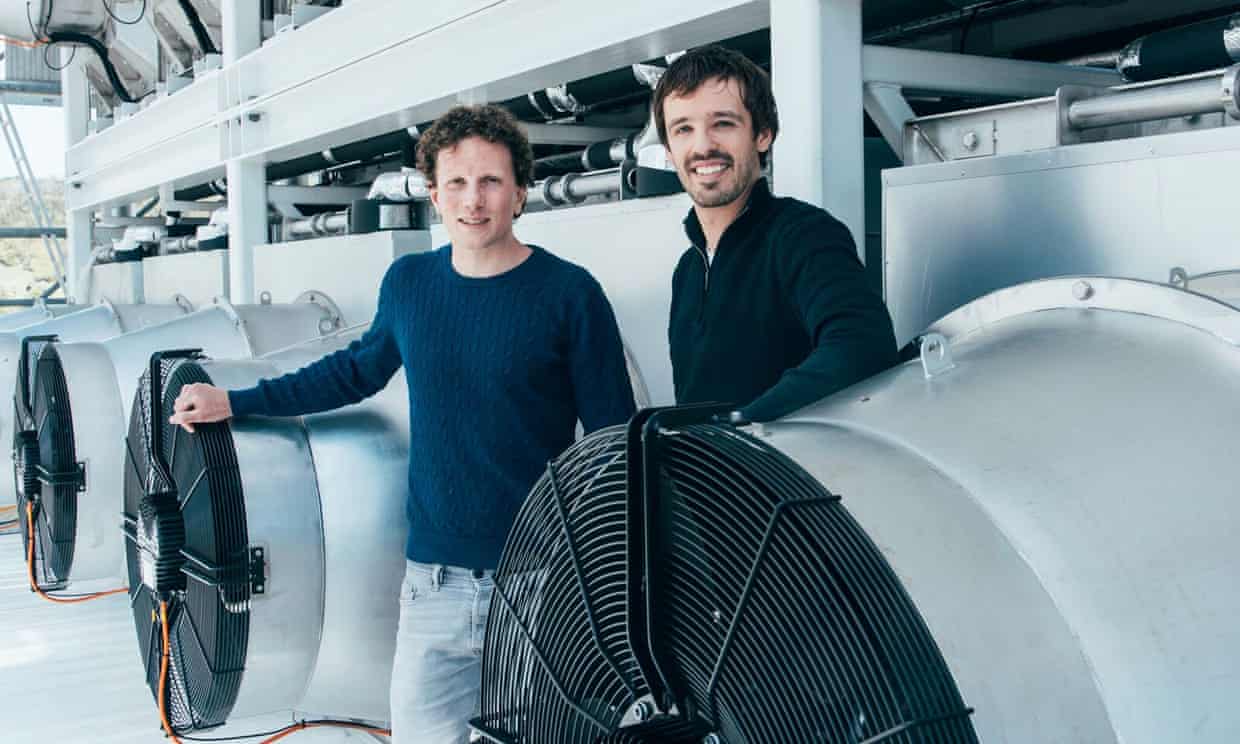 “A2F is a potentially game-changing technology, which if successfully scaled up will allow us to harness cheap, intermittent renewable electricity to drive synthesis of liquid fuels that are compatible with modern infrastructure and engines,” says Geoff Holmes of CE. “This offers an alternative to biofuels and a complement to electric vehicles in the effort to displace fossil fuels from transportation.”

Synthetic fuels have been made from CO2 and H2 before, on a small scale. “But,” Holmes adds, “we think our pilot plant is the first instance of Air to Fuels where all the equipment has large-scale industrial precedent, and thus gives real indication of commercial performance and viability, and leads directly to scale-up and deployment.”

The next step is to raise the money, scale up and then commercialise the process using low-carbon electricity like solar PV (photovoltaics). Company publicity envisages massive walls of extractor fans sited outside cities and on non-agricultural land, supplying CO2 for fuel synthesis, and eventually for direct sequestration.

“A2F is the future,” says Holmes, “because it needs 100 times less land and water than biofuels, and can be scaled up and sited anywhere. But for it to work, it will have to reduce costs to little more than it costs to extract oil today, and – even trickier – persuade countries to set a global carbon price.”

Meanwhile, 4,500 miles away, in a large blue shed on a small industrial estate in the South Yorkshire coalfield outside Sheffield, the UK Carbon Capture and Storage Research Centre (UKCCSRC) is experimenting with other ways to produce negative emissions.

Critics say these technologies are unfeasible. Not producing the emissions in the first place would be much cleverer

The UKCCSRC is what remains of Britain’s official foray into carbon capture and storage (CCS), which David Cameron had backed strongly until 2015. £1bn was ringfenced for a competition between large companies to extract CO2 from coal and gas plants and then store it, possibly in old North Sea gas wells. But the plan unravelled as austerity bit, and the UK’s only running CCS pilot plant, at Ferrybridge power station, was abandoned.

The Sheffield laboratory is funded by £2.7m of government money and run by Sheffield University. It is researching different fuels, temperatures, solvents and heating speeds to best capture the CO2 for the next generation of CCS plants, and is capturing 50 tonnes of CO2 a year. And because Britain is phasing out coal power stations, the focus is on achieving negative emissions by removing and storing CO2 emitted from biomass plants, which burn pulverised wood. As the wood has already absorbed carbon while it grows, it is more or less carbon-neutral when burned. If linked to a carbon capture plant, it theoretically removes carbon from the atmosphere.

Known as Beccs (bioenergy with carbon capture and storage), this negative emissions technology is seen as vital if the UK is to meet its long-term climate target of an 80% cut in emissions at 1990 levels by 2050, according to UKCCSRC director Professor Jon Gibbins. The plan, he says, is to capture emissions from clusters of major industries, such as refineries and steelworks in places like Teesside, to reduce the costs of transporting and storing it underground.

“Direct air capture is no substitute for using conventional CCS,” says Gibbins. “Cutting emissions from existing sources at the scale of millions of tonnes a year, to stop the CO2 getting into the air in the first place, is the first priority. 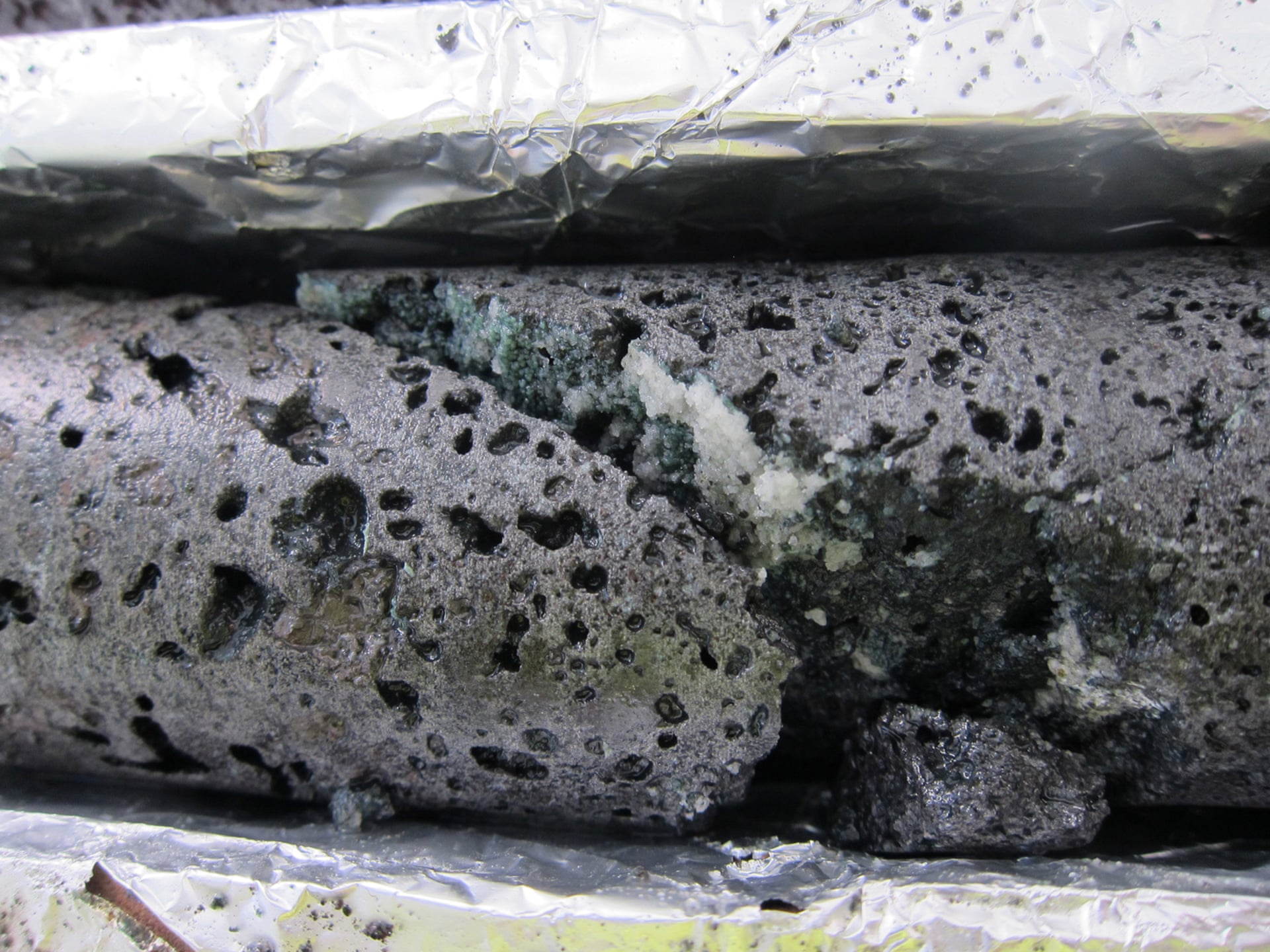 “The best use for all negative emission technologies is to offset emissions that are happening now – paid for by the emitters, or by the fossil fuel suppliers. We need to get to net zero emissions before the sustainable CO2 emissions are used up. This is estimated at around 1,000bn tonnes, or around 20-30 years of global emissions based on current trends,” he says. “Having to go to net negative emissions is obviously unfair and might well prove an unfeasible burden for a future global society already burdened by climate change.”

The challenge is daunting. Worldwide manmade emissions must be brought to “net zero” no later than 2090, says the UN’s climate body, the Intergovernmental Panel on Climate Change (IPCC). That means balancing the amount of carbon released by humans with an equivalent amount sequestered or offset, or buying enough carbon credits to make up the difference.

But that will not be enough. To avoid runaway climate change, emissions must then become “net negative”, with more carbon being removed than emitted. Many countries, including the UK, assume that negative emissions will be deployed at a large scale. But only a handful of CCS and pilot negative-emission plants are running anywhere in the world, and debate still rages over which, if any, technologies should be employed. (A prize of $25m put up by Richard Branson in 2007 to challenge innovators to find a commercially viable way to remove at least 1bn tonnes of atmospheric CO2 a year for 10 years, and keep it out, has still not been claimed – possibly because the public is uncertain about geoengineering.)

The achilles heel of all negative emission technologies is cost. Government policy units assume that they will become economically viable, but the best hope of Carbon Engineering and other direct air extraction companies is to get the price down to $100 a tonne from the current $600. Even then, to remove just 1% of global emissions would cost around $400bn a year, and would need to be continued for ever. Storing the CO2 permanently would cost extra. 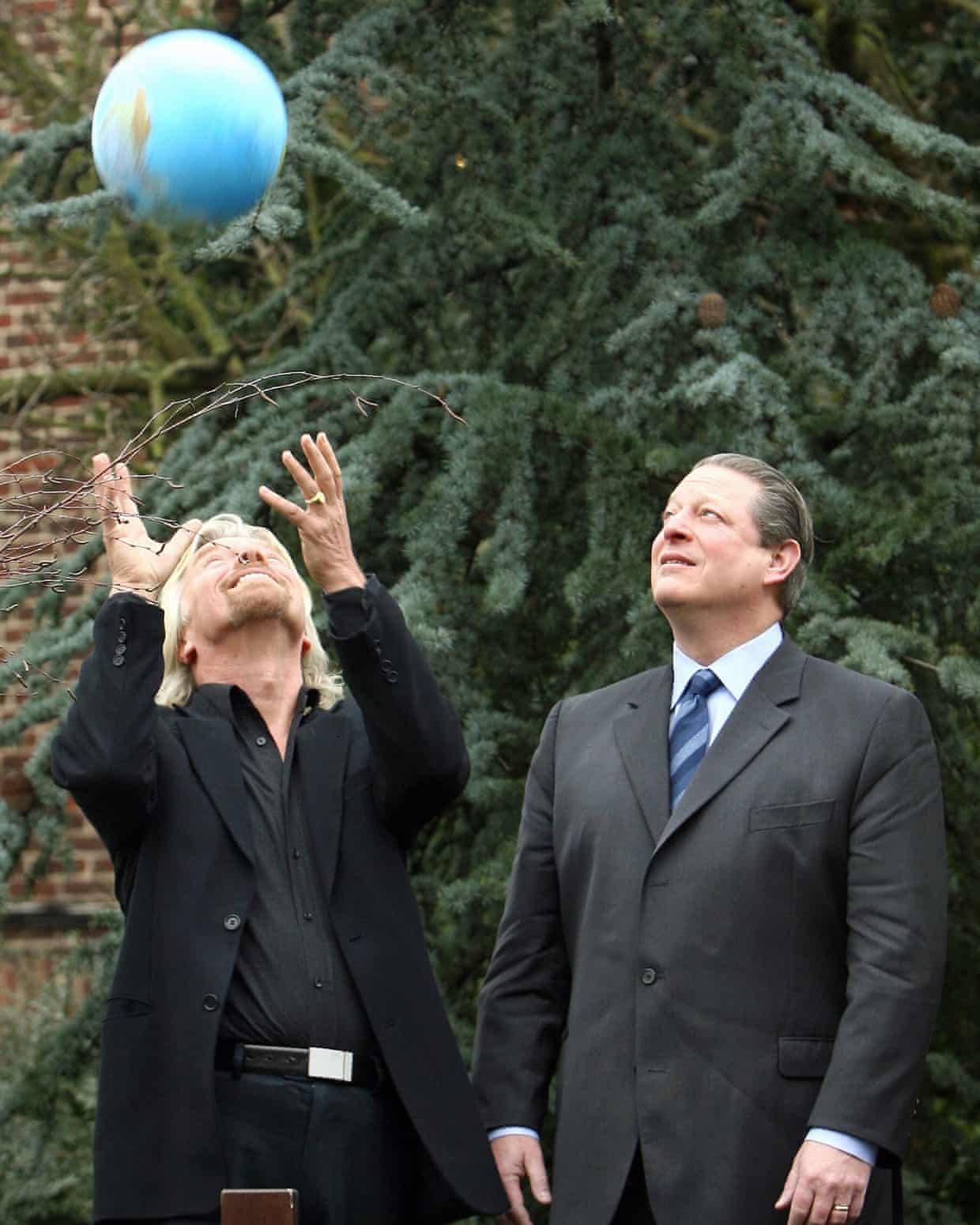 Richard Branson and Al Gore at the 2007 launch of the $25mVirgin Earth prize for carbon capture solutions, as yet unclaimed. Photograph: Adrian Dennis/AFP/Getty Images

Critics say that these technologies are unfeasible. Not using the fossil fuel and not producing the emissions in the first place would be much cleverer than having to find end-of-pipe solutions, say Professor Kevin Anderson, deputy director of the Tyndall Centre for Climate Change Research, and Glen Peters, research director at the Centre for International Climate Research (Cicero) in Norway.

In a recent article in the journal Science, the two climate scientists said they were not opposed to research on negative emission technologies, but thought the world should proceed on the premise that they will not work at scale. Not to do so, they said, would be a “moral hazard par excellence”. 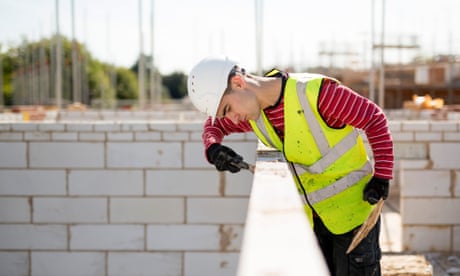 Instead, governments are relying on these technologies to remove hundreds of millions of tonnes of carbon from the atmosphere. “It is breathtaking,” says Anderson. “By the middle of the century, many of the models assume as much removal of CO2 from the atmosphere by negative emission technologies as is absorbed naturally today by all of the world’s oceans and plants combined. They are not an insurance policy; they are a high-risk gamble with tomorrow’s generations, particularly those living in poor and climatically vulnerable communities, set to pay the price if our high-stakes bet fails to deliver as promised.” According to Anderson, “The beguiling appeal of relying on future negative emission technologies is that they delay the need for stringent and politically challenging policies today – they pass the buck for reducing carbon on to future generations. But if these Dr Strangelove technologies fail to deliver at the planetary scale envisaged, our own children will be forced to endure the consequences of rapidly rising temperatures and a highly unstable climate.”

Kris Milkowski, business development manager at the UKCCSRC, says: “Negative emissions technology is unavoidable and here to stay. We are simply not moving [to cut emissions] fast enough. If we had an endless pile of money, we could potentially go totally renewable energy. But that transition cannot happen overnight. This, I fear, is the only large-scale solution.”