A HUGE PART OF ANTARCTICA IS MELTING AND SCIENTISTS SAY THAT'S BAD NEWS...

(CNN)Antarctica is experiencing weird weather, and the changes have some scientists worried about the future...

There's an area on the west side of the icy continent called the West Antarctic Ice Sheet, and last January, scientists found a 300,000-square-mile portion of its perimeter was melting. That's an area roughly two times the size of California, covered in slush.
According to recent research published in Nature Communications, the melt was caused by an unusually strong El Niño event around January 2016.
Video: What is El Niño?
"A melt of this magnitude is relatively rare in Antarctica," said Julien Nicolas, one of the paper's authors at the Ohio State University Byrd Polar and Climate Research Center. "There have been about three or four events of this size in the last 40 years."

El Niño is a weather event that brings unusually warm water in the Pacific Ocean, and one of the big takeaways from the research is that this strong El Niño in 2016 directly contributed to the unusually widespread Antarctic ice melt. 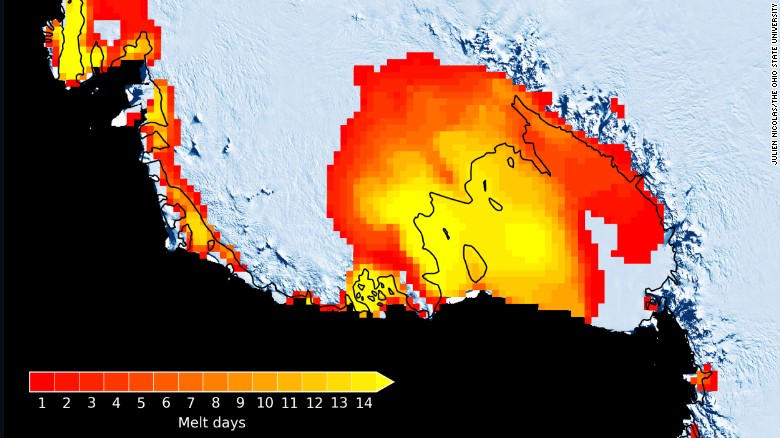 For more than two weeks in January 2016, a passive microwave satellite observed surface ice melt two times the size of California.
The news also is ominous for another reason: It means the West Antarctic Ice Sheet is essentially being melted from both sides. El Niños push warm water under the sheet. On top, colder westerly winds usually do enough to stave off any approaching warm weather, but in the 2016 incident, they didn't.
This event also brought about another surprise for scientists: Rain.
"We saw in our observations that there were some rain, we heard from some parties on the Ross Ice Shelf, and we saw it on the weather models," Nicolas said. "That's very unusual. We don't have a record of rain in Antarctica, so we don't know how often it's happened in the past."

Rain and slush would make for a miserable day anywhere, but the weird weather patterns observed over the two-week period in 2016 painted a potentially worrisome picture for the future.
If more extreme El Niños occur, ice shelves such as the Ross Ice Shelf on the West Antarctic Ice Sheet will melt and be weakened. Sometimes, those ice melts can lead to dramatic rivers and waterfalls that leak off of the ice structure. Take a look at a recent video of the Nansen Ice Shelf, which is north of the West Antarctic Ice Sheet:
The ice melt from 2016 wasn't as dramatic. It was more of a slush on top of the ice, Nicolas says. Still, he adds, even if the melted slush and water refreezes they can leak into cracks and damage the inner structure of the ice. Remember, these are massive, massive networks of ice that can't really be thought of as one homogenous, unchanging object.
If these shelves are weakened, the could crack and break off, and that would open the floodgates -- literally.
"When it comes to the disintegration of the ice shelves, they are like corks in a bottle," says Dr. David Bromwich, another author of the paper and a professor at the Ohio State. "They are holding back the contents of the bottle, in this case the ice sheet, and you take the cork away and everything flows out to the ocean."
Once the ice is in the ocean, Bromwich says, it could cause sea levels to rise dramatically and rapidly.
"Rapidly," of course, means something completely different on a geological time scale.
"We don't know the time scale of this," he said. "There was one modeling study that showed quite dramatic changes on the scale of a few hundred years, and another scenario would be quite a slow change. But a foot of sea rise, or two feet, in the order of 100 years would be alarming."