A KEY ANTARCTIC GLACIER JUST LOST A HUGE PIECE OF ICE — THE LATEST SIGN OF ITS WORRYING RETREAT... 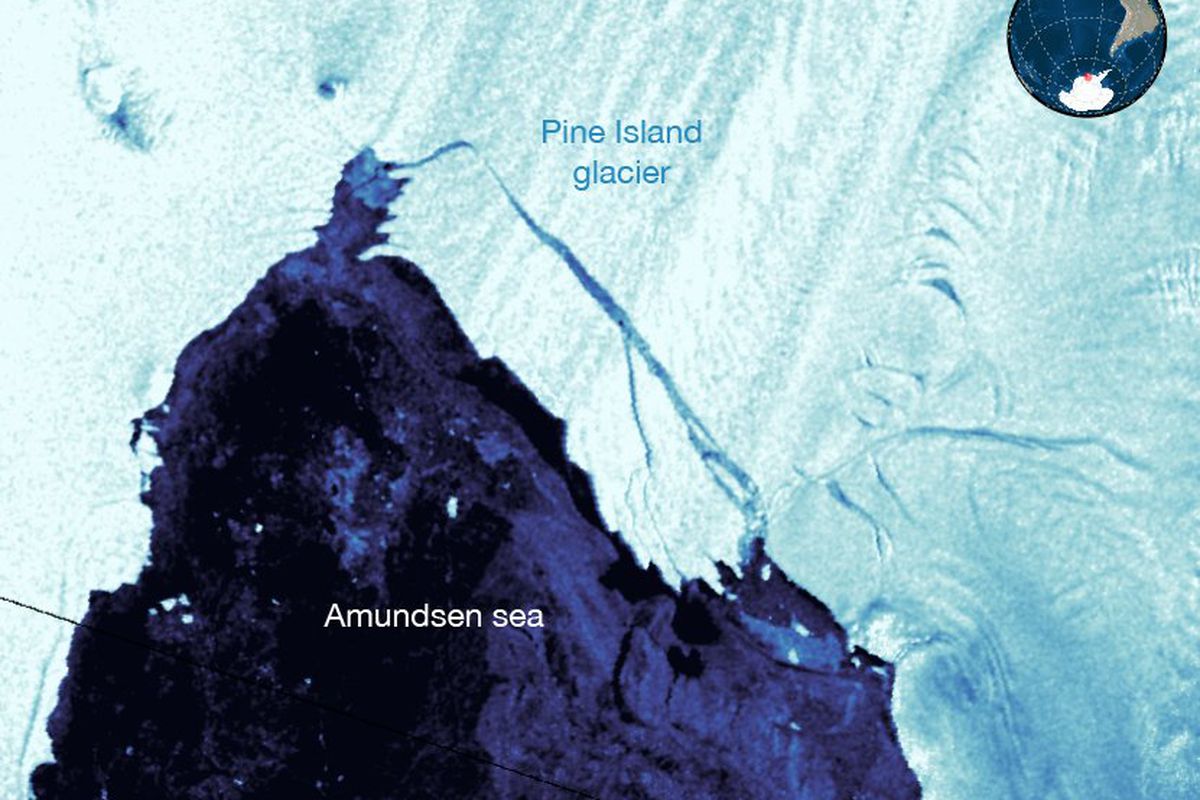 An enormous Antarctic glacier has given up an iceberg over 100 square miles in size, the second time in two years it has lost such a large piece in a process that has scientists wondering whether its behavior is changing for the worse...

The Pine Island Glacier is one of the largest in West Antarctica, a region that is currently Antarctica’s biggest ice loser. Pine Island, which loses an extraordinary 45 billion tons of ice to the ocean each year (– equivalent to 1 millimeter of global sea level rise every eight years — is 25 miles wide where its floating front touches the sea, and rests on the seafloor in waters more than a half-mile deep. The single glacier alone contains 1.7 feet of potential global sea level rise and is thought to be in a process of unstable, ongoing retreat.

That’s why scientists are watching it closely, and on Saturday, Stef Lhermitte, a satellite observation specialist at Delft University of Technology in the Netherlands, posted a satellite image showing that Pine Island had “calved,” or broken off a piece of ice about 103 square miles in area. (For comparison, Manhattan is 22.83 square miles in size.) The rectangular piece of ice then appears to have lost some of its shape immediately as smaller pieces splintered off.

“It’s the fifth large calving event since 2000,” Lhermitte said. “This one and 2015, they were much further inland than the previous ones. So there has been a retreat of the calving front, specifically between 2011 and 2015.”

The Washington Post confirmed the break with researchers at NASA and with another team of scientists studying Pine Island, Seongsu Jeong and Ian Howat of Ohio State University. They published a paper last year finding that Pine Island Glacier has developed a troubling new way of losing ice, with rifts forming in the center of its floating ice shelf from beneath, rather than at the sides, the traditional manner. They suspect this is a function of warmer ocean waters reaching the base of the glacier and weakening it.

“We predicted that the rifting would result in more frequent calving, which is what’s happening here,” Howat said by email. “If new rifts continue to form progressively inland, the significance to ice shelf retreat would be high.”

Last fall, NASA’s Operation IceBridge mission snapped a photo of the rift in Pine Island Glacier that would lead to the latest calving event.

Large rift near the Pine Island Glacier tongue, West Antarctica, as seen during an IceBridge flight on Nov. 4, 2016. (NASA/Nathan Kurtz)

And the drama may not be over. According to Ohio State glaciologist Ian Howat, the current break could precipitate additional, smaller breaks soon.

“A series of thin cracks was visible in the center of the ice shelf about 3 km inland of the current break in March 2017,” he said by email. “We don’t have any more recent data to see what its status is. But this means that we would expect another calving event very soon.” Something similar happened following the 2015 break — it was followed by another smaller event that Howat at the time likened to an “aftershock.”

The current ice loss event is nowhere near the size of the much-publicized loss of an enormous ice island from the Larsen C ice shelf earlier this year. However, in terms of sea level rise, changes at the Pine Island Glacier are far more consequential.

The current break was in the glacier’s floating ice shelf, which extends out over a deep ocean cavity. Further inland, the floating portion of the glacier ends and the ice slopes down and touches the seafloor at a vulnerable point called the “grounding line.” Changes in the temperature of waters reaching the grounding line in recent decades are widely believed to be the reason that Pine Island Glacier has been thinning and losing so much ice.

The glacier is feared to be in a process of unstable, runaway retreat. The grounding line has been moving inland, and as it retreats, the seafloor bed dips downward, meaning that the ocean becomes even deeper and the ice becomes even thicker. Thus, further retreat should increase the rate of outward flow and lead to even more ice loss.

The current loss is actually relatively small compared with prior events at Pine Island — a 2013 break released an iceberg 252 square miles in area, for instance, and the 2015 break was 225 square miles in size.

Moreover, the simple fact that large glaciers occasionally break off pieces in calving events is not news. It’s normal behavior, said Knut Christianson, a glaciologist at the University of Washington in Seattle who studies Pine Island.

“However, the mode of calving of Pine Island Glacier appears to be shifting,” Christianson said by email. That the latest rift originated in the center of the ice shelf, rather than at one of its sides, suggests that it developed far inland at the grounding line as a result of the warm ocean hitting the base of the glacier, he said.

“This results in smaller but more-frequent calving events,” he continued. “The persistence and net effect of this shift in calving behavior has yet to be determined as it has only occurred during the past two years, but it clearly merits continued observation.”

The overall result of recent changes, according to Lhermitte, is that the floating ice shelf of Pine Island Glacier has retracted inward considerably — although the 2015 and 2017 breaks did occur at around the same location.

Lhermitte created this animation to show the retreat:

Compared with the state of affairs in 2013, “the Pine Island Glacier (PIG) front position has now retreated about 20 km further into Pine Island Bay, especially at its eastern side,” said Christopher Shuman, a researcher at the Joint Center for Earth Systems Technology, a NASA and University of Maryland Baltimore County center.

“The PIG front is now substantially farther inland since it began retreating from a much more seaward position,” said Shuman by email. In other words, steady retreat of the glacier has visibly changed the Antarctic coastline.

Further retraction would only increase alarm about the state of the glacier, because floating ice shelves play a key stabilizing role, holding back the outward flow of ice. Pine Island’s ice is already flowing outward at a quite rapid 2.5 miles per year.

The immediate loss of ice from the shelf doesn’t raise sea level because that ice was already afloat — but any further increase of Pine Island’s overall flow would indeed have that effect.

“We are very worried about what might happen to Pine Island glacier in relation to sea level rise,” Lhermitte said.

EPA chief Pruitt met with many corporate execs. Then he made decisions in their favor.