A MESSAGE FROM THE END OF THE WORLD... 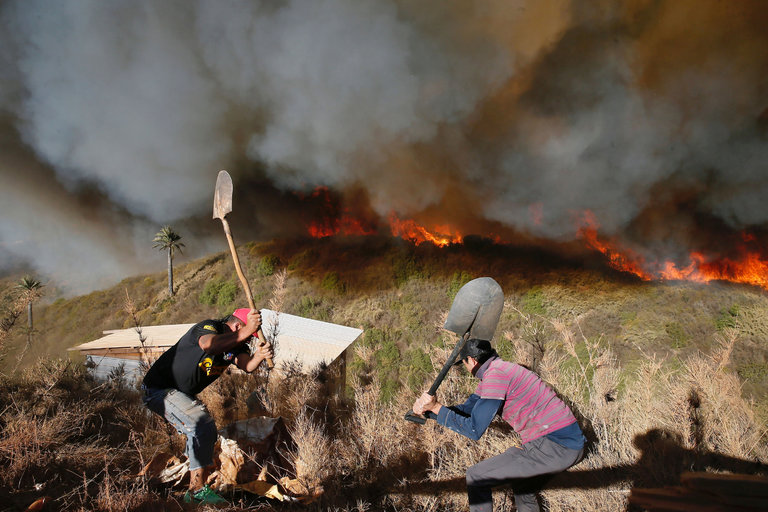 Residents working to prevent a wildfire from spreading to their homes in Vina del Mar, Chile, in March. Credit Rodrigo Garrido/Reuters

SANTIAGO, Chile — Here in Chile, in the far south of the Southern Hemisphere, it has been the summer of our discontent...

Never have so many natural catastrophes in a row hit this country at the end of the world. For once, it is not the earthquakes that have assailed us since time immemorial or the tsunamis that often follow, devastating land and coast, mountainscapes and ocean. This time, our unprecedented woes have all been man-made.

First were the forest wildfires, mostly to the south of Santiago, the worst in recorded history. Countless acres have been burned to cinders, killing people and livestock, leveling a whole town, destroying centenarian trees as well as newer woodlands meant for export. The conflagration was not controlled until supertanker planes that could carry tons of water were flown in from abroad.

For those not directly threatened by the raging blazes, there were other costs. The air here in Santiago, befouled with smoke and ash, became unbreathable for weeks, a situation aggravated by inordinately high temperatures that did not diminish even at night, as was habitually the case, when we used to have the chance to cool off and face the next day refreshed and energized.

We prayed for rain, though we are aware that it never rains during the summer months. When our prayers were answered, it was not what we had expected. A deluge descended, not in the zones where the fires continued to flare up now and then, but deep in the Andes and its glaciers, and with such fury that rivers overflowed and avalanches of mud and debris descended on villages and valleys, roads and bridges.

As such a downpour had never come to pass before in the summer, the water-processing plants were entirely unprepared. This left millions of Chileans without water in our homes, unable to drink, cook, clean, bathe. It is as if we had been cursed with a plague: stray dogs expiring of thirst on the streets and plants withering and lines of people with buckets, wash basins, bottles, standing endlessly in front of emergency distribution centers.

The news that many beaches in Chile have been closed as, once again after last year’s plague, armadas of jellyfish wash up on the shores and fish perish. And then, there are the recent reports that a gigantic crack has deepened in an Antarctic ice shelf, increasing the possibility that an iceberg extending nearly 2,000 square miles will crash into the sea and, as it melts, alter forever the seascape of the planet, with Chile (whose territorial claim in that continent is governed by a treaty with six other nations) one of the first victims.

It is hardly strange, therefore, that Chile does not close its eyes to what is happening to our water, forests and coastline. Everyone here — and I mean everyone, from extreme right to extreme left — understands that in this land, whose name comes from the Aymara language for the place where the earth ends, we are witnessing a cataclysm of epic proportions that presages another sort of end, the end of the world as we know it. And so we all are conscious that something just as epic must be done to change course before it is too late.

We also understand, of course, that such a change depends on what other international actors do elsewhere.

What is truly intolerable, what enrages and saddens me — as the fires rage in the forests and the rain falls when and where it should not and the rivers are choked with mudslides and the fish disappear from the ocean and the Antarctic breaks up — is what is transpiring simultaneously in the remote United States. Precisely at this dire moment in Chile’s natural history, precisely now I am forced to watch how the government of the powerful country that my wife and I have adopted as our home is gutting the very environmental policies that, even if insufficient, were at least steps in the right direction.

As we get ready to return to the United States, our friends and relatives ask, over and over, can it be true? Can President Trump be beset with such suicidal stupidity as to deny climate change and install an enemy of the earth as his environmental czar? Can he be so beholden to the blind greed of the mineral extraction industry, so ignorant of science, so monumentally arrogant, not to realize that he is inviting apocalypse? Can it be, they ask.

The answer, alas, is yes.

Ariel Dorfman, an emeritus professor of literature at Duke University, is the author of the play “Death and the Maiden” and, more recently, the memoir “Feeding on Dreams.”