A PARABLE FROM DOWN UNDER FOR U.S. CLIMATE SCIENTISTS... 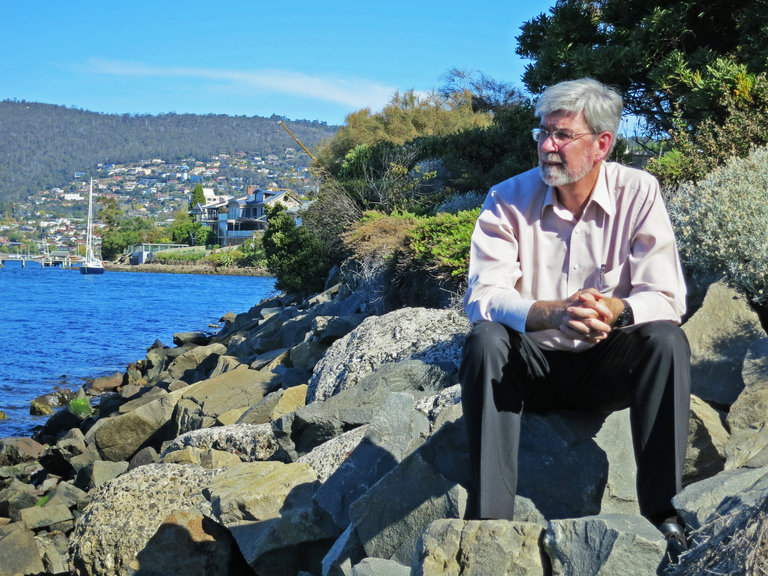 John Church in Hobart in September 2010. He is known internationally for helping to bring statistical and analytical rigor to longstanding questions about sea level rise. Credit Peter Boyer

HOBART, TASMANIA — John A. Church, a climate scientist, did not look or sound like a man who had recently been shoved out of a job...

Speaking softly and downing coffee at an outdoor cafe in this old port city, he sounded more like a fellow fresh off a jousting match. “I think we had a win — a bigger win than I ever anticipated,” Dr. Church said in an interview last month.

Australian climate science went through an upheaval last year, one that engaged the press and the public in defending the importance of basic research. In the end, Dr. Church did indeed lose his job, but scores of his colleagues who had been marked for layoffs did not. Some of them view him as having sacrificed his career to save theirs.

What happened in Australia shows the power of an informed citizenry keeping watch on its government. And it may turn out to be a precursor to an attack on fundamental climate research in the United States.

Australian climate science is important not just for Australia, a country of 24 million people, but for the world. Australia is the most scientifically accomplished nation in the Southern Hemisphere, which has expanses of ocean and relatively little land.

In effect, this small country is keeping an eye on half the planet for the rest of us.

Much of the necessary work is done by scientists on the payroll of the country’s principal research agency, known as the Commonwealth Scientific and Industrial Research Organization. It was within that agency that last year’s controversy unfolded.

Budgets at the agency had been under pressure for years, much as scientific budgets have been in the United States. Then in 2015, a new boss, Larry R. Marshall, took over at the behest of the conservative government, controlled by a party known here, oddly, as the Liberals, and led now by Malcolm Turnbull. (Actual liberals join the Labor Party.)

Though Dr. Marshall is Australian, he made his name as a scientific researcher and entrepreneur in the United States. He went back to Australia with the goal of sprinkling some Silicon Valley pixie dust on the agency, doing more to turn its fundamental research into jobs and start-up companies to benefit the economy.

Studying the agency’s costs, Dr. Marshall and his aides decided that too many people were working on basic questions about the climate. If he laid off scores of them, he reasoned, he would have money to reinvest in other priorities. Those would include looking for ways to reduce emissions, and to adapt to climate changes that could no longer be avoided.

When they found out about the plan, though, the agency’s scientists were dumbfounded. They were entirely in favor of research on solutions, but the notion that basic climate monitoring and analysis could be scaled back struck them as preposterous.

While the world’s scientists have established that the planet is warming, that human activity is the main cause and that continued high emissions will pose profound risks, they are still far from having a complete understanding of the planetary climate.

When Dr. Marshall’s plan was unveiled, Australian researchers hit the panic button. Among those who swung into action was Dr. Church.

He is an oceanographer and climate scientist with decades of experience. Working from one of the research agency’s offices in Hobart, the capital of Australia’s island state of Tasmania, he had become known internationally for helping to bring statistical and analytical rigor to longstanding questions about sea level rise. With a colleague, Dr. Church was the first to establish that the rise had accelerated during the 20th century, a strong indication that the pace is linked to emissions of greenhouse gases.

He also had extensive contacts in the Australian press. Dr. Church said that by the time he reached Peter Hannam, a top environmental journalist with The Sydney Morning Herald, Mr. Hannam was already sniffing out the story of the cutbacks. Once he broke it, the situation developed into an international brouhaha.

A flood of internal documents leaked. Thousands of scientists weighed in from abroad, pleading with the Australian government to reconsider. People marched in the streets. Hearings were convened.

Dr. Church stuck his neck out farther than his colleagues. In an open letter to Dr. Marshall, he urged that the cuts be rolled back and accused his boss of being “disrespectful and insulting” toward the agency’s employees.

Trying to allay suspicion about his motives, Dr. Marshall took pains to make clear that he accepted the basic findings of climate research. The climate “absolutely is changing,” he declared before a committee of the Australian Senate. “It is changing, and we have to do something about it.”

Explaining the origins of the controversy, Dr. Marshall said in a recent telephone interview from Canberra, the national capital, “Unfortunately, with a finite funding envelope, you’ve got to make choices where you fund.”

Despite the government’s efforts to quell the controversy, the proposed layoffs became an issue last summer in a hard-fought election campaign, part of a larger argument about the perceived weakness of Australia’s climate policies.

The Liberal-led conservative coalition narrowly beat Labor, but lost seats in Parliament and returned to Canberra in a weakened position. Almost as soon as the election was over, the government partly backed down, with a new science minister, Greg Hunt, declaring that climate analysis would be a “bedrock function” of the research agency.

Originally, scores of scientists and staff members at a research center outside Melbourne had been marked for layoffs, but in the end only 20 or so left, many of them near or past retirement age. The center is now recruiting additional scientists, and may wind up larger than before the fight.

In the interview, Dr. Marshall said he wished he had communicated more effectively with the agency’s employees about the reasons for the shift in priorities. “We are a learning organization, and there are definitely things we’d do differently,” he said.

As the controversy unfolded, Dr. Church was implacable in public, but he said in our interview that he had wrestled with major doubts.

“I had sleepless nights for months,” he said. “I thought, am I doing the right thing by my colleagues? Am I looking after their positions, or am I making it worse for them and for the Australian public?”

The end, he said, came as no great shock. He was on a research ship in the middle of the Southern Ocean when the word came down that his job would not be one of those being saved.

“I’m still angry, in some sense,” he said, citing certain colleagues in the agency who he felt had not defended the integrity of science at a critical moment.

But he was able to take full retirement benefits. His reputation as a man of honor was burnished by the episode, and the University of New South Wales offered him a position that will allow him to continue his work. He expressed gratitude to that institution.

As Dr. Church and I were finishing our coffees, I noted that President Trump had offered a budget outline for the United States that, if enacted, would almost certainly require huge cuts in the basic scientific enterprise of monitoring and analyzing the climate.

Congress will have the last word after Mr. Trump presents a more detailed outline, so there is no way to know how that fight will end. But over two weekends in April, tens of thousands of Americans marched in the streets to defend science and to demand action on climate change.

That means the citizenry in the United States, just as in Australia, is alert and watching. You can bet a lot of American scientists are thinking these days about how they will respond if the government starts gutting climate research.

“I guess somebody in the United States,” Dr. Church said, “has to step out into the public and do what I did.”