A RIFT IS SPEEDING UP ITS SPREAD ACROSS THE LARSEN C ICE SHELF IN ANTARCTICA...

A large rift is widening across an increasingly fragile Antarctic ice shelf, scientists found. The crack is spreading across the Larsen C Ice Shelf at an increased rate, threatening to carve out an iceberg the size of Delaware while destabilizing a larger area of ice roughly the size of Scotland...

When this iceberg calving event happens — no one knows exactly when it will occur, except that it's getting closer — it will be the largest calving event in Antarctica since 2000, the third-biggest ever recorded and the largest from this particular ice shelf, scientists say.

About 10 to 12 percent of the Larsen C Ice Shelf is expected to break off during such an event, leaving the larger ice shelf even more vulnerable to melting from increasing air and ocean temperatures.

The iceberg and ice shelf melting would not, however, increase sea levels, since the ice is already resting in the ocean, like an ice cube in a glass.

However, while the Larsen C Ice Shelf may not be a sea level rise concern, rising temperatures and changes in land and sea ice across the Antarctic Peninsula are affecting native wildlife and may help disrupt regional — and possibly even global — ocean circulation.

Scientists with a UK-based program called MIDAS have been monitoring the progress of the rupture since 2011. They found that between March and August of this year, the crack expanded by 22 kilometers, or 14 miles. This was slightly faster than the expansion seen in 2014, when the rift expanded by about 20 kilometers, or 12 miles. 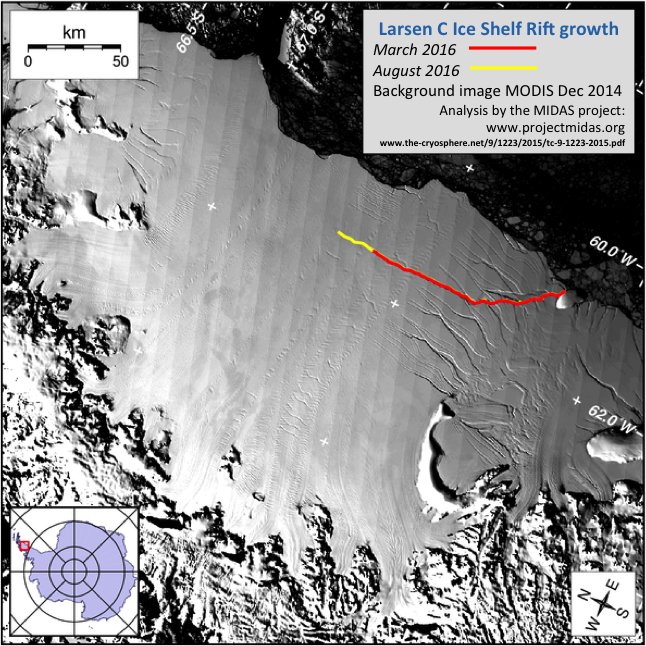 The rift is likely to lead to an iceberg breaking off, which will remove about 10% of the ice shelf’s area

The Larsen C Ice Shelf is the most northerly of the remaining major Antarctic Peninsula ice shelves. This part of Antarctica has been warming rapidly in recent years, due to a combination of increasing air and sea temperatures.

The nearby Larsen B Ice Shelf made worldwide headlines in 2002 when it broke up after a similar process of rift-induced iceberg calving.

The Larsen B event was actually incorporated into the opening scenes of the sci-fi climate change-related disaster film, The Day After Tomorrow.

One of the MIDAS researchers, Martin O'Leary, who is a scientist at Swansea University, said the worry about this rift has to do with how it could destabilize the broader ice shelf after it breaks off.

"This was the biggest rate of expansion we've seen — there was a similar but
slower lengthening over the winter of 2014," O'Leary told Mashable in an email.

"The last big iceberg to come off Larsen C was in 1988, but that was a
section which was jutting out to sea quite strongly, whereas this chunk of ice
will take a bite out of the main body of the shelf," he said.

According to O'Leary, the ice on the seaward side of the rift will be lost as a huge iceberg that is about 6,000 square kilometers, or 2,316 square miles in area, "but it's hard to predict exactly
when" the iceberg will break off.

"The ice shelf loses icebergs like this naturally every few decades, but
we're concerned that this one might extend far enough back that it breaks the
"compressive arch" which is holding the ice shelf in place," he said.

"There was a similar event just before the collapse of Larsen B in 2002," he said.

The MIDAS project involves scientists from several research institutions studying the ice shelf via satellite measurements and in-situ observations taken on top of the ice shelf itself. It is funded by the UK's National Environment Research Council.

Satellite image of the Larsen B ice shelf after it collapsed, on Jan. 31, 2002. Image: NASA

A study published in the journal Cryosphere in 2015 found that while the predicted ice loss from the rift in Larsen C would not be unprecedented, it could spell doom for the larger ice shelf itself by leaving the remaining ice in a far more vulnerable position.

"If the ice breaks far enough back, it will destabilize the ice shelf, but exactly where that threshold is, we don't know. Our computer modeling indicates that this rift is definitely starting to enter the right ballpark though," he said.

For example, a separate study, published in Nature Communications in June, found that meltponds forming on the surface of the Larsen C Ice Shelf are helping to speed the shelf's demise.

As the meltwater percolates down into the ice it forms a huge, solid layer of ice close to the shelf's surface.

This area of ice is milder and denser than the layers of snow that are typically found at this depth in most ice shelves and glaciers. In turn, this area of solid ice is affecting the movement of the ice shelf, speeding its flow into the sea, the study concluded.