A WITNESS TO IRAN’S INTENSIFYING STRUGGLE WITH CLIMATE CHANGE... 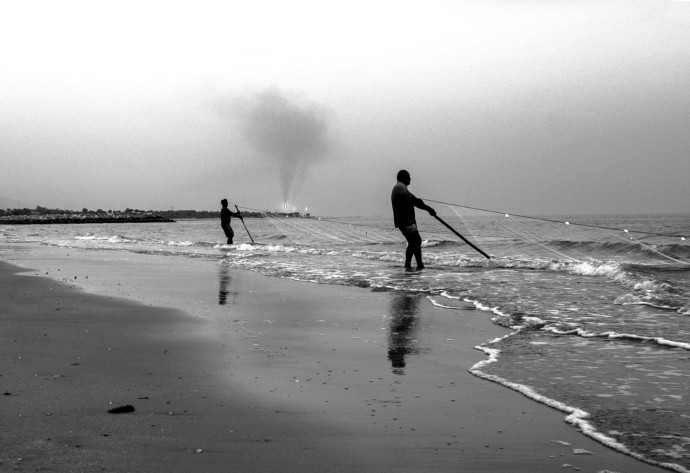 “People are leaving their homes beside the lake because they have to find new jobs.”

Ako Salemi took the first photographs of his career when he was a teen-ager, growing up in northern Iran. His earliest subject, a river near his family’s home, is now mostly dirt. In Salemi’s native country, as in much of the water-scarce Middle East, climate change has led to desiccation. Lake Urmia, once the sixth-largest saline lake in the world, now has just ten per cent of the water that it contained in the nineteen-seventies. (Salemi’s childhood river was one of its tributaries.) The sea level along the country’s southern coastline, meanwhile, where most of its oil and petrochemical infrastructure is located, is projected to rise more than two feet by the end of the century, and by 2070 could flood the homes of more than two hundred thousand people annually. And yet Salemi told me that many of his compatriots aren’t really aware of global warming. “They know about droughts and the lack of water resources, but they don’t know why these things are happening,” he said.

Last year, with all this in mind, Salemi began travelling across Iran to document the changing climate. (His project is supported by the Pulitzer Center on Crisis Reporting, which recently awarded him its Persephone Miel fellowship.) Salemi began in three ports on the Persian Gulf, where he shot a series of pictures in black and white. They hint at a slow, gloomy inundation. People are either concealed in shadow or seen at some distance, as lonely silhouettes in a big, uncaring land. In one image, two fishermen stand in white-foam shallows, pulling translucent nets from the sea. Their figures frame an enormous gas flare on the distant horizon, which rises from South Pars, Iran’s portion of the largest natural-gas field in the world. (Qatar owns the rest.) In another, a woman wearing a hijab, almost entirely submerged in the sea, is photographed from behind. Her pale hands stretch forward from swirls of black cloth. It’s easy to imagine that she’s walking into the murky depths, never to return. In the only closeup portrait, which pays homage to Diane Arbus, a pair of identical twin girls in matching Hello Kitty swimsuits hold hands on the beach. Their expressions are shy and calm, yet the picture is haunting. The camera looks beyond their sweet faces to the dark sea behind them, and to a future in which the landscape of their childhood no longer exists.

Salemi has also travelled to several areas afflicted by drought in both central and northern Iran, including Lake Urmia. Not long ago, freshwater from the oak-forested mountains on the Iraqi border replenished the lake each year and rebalanced its salinity. A unique species of brine shrimp flourished in the tolerably salty water, and migratory birds like flamingos and pelicans arrived in great, orchestral flocks to eat them. Tourism, fishing, and agriculture prospered. Then, starting in the nineteen-nineties, various factors began depleting the lake—a rapidly growing population, deforestation, water-diverting dams, water-intensive crops, and inefficient irrigation systems. When drought set in, a decade ago, Urmia’s water level dropped precipitously. Soon, the lake had such a high salt concentration that the brine shrimp could no longer survive; the whole ecosystem began to break down.

Today, the lake is a vast expanse of salt flats. In one of Salemi’s photographs, a rusty anchor sits in the foreground, cracked plains and abandoned ships extending behind it. In other images, the distant mountains are wrapped in haze. It’s a pretty sight, but in fact the region is now plagued by dust storms, which transport the lake bed’s salt and chemical residues onto nearby farmland, contaminating its soil and reducing harvests while also contributing to an increase in respiratory diseases, cancer, and birth defects among the local population. “There are now a lot of climate refugees in Iran,” Salemi told me. “People are leaving their homes beside the lake because they have to find new jobs.”

Unlike President-elect Donald Trump, Iranian President Hassan Rouhani has said that he believes that fossil-fuel consumption is the main driver of climate change. Last year, he signed the Paris climate agreement, and his government has committed to reducing Iran’s greenhouse-gas emissions by four per cent, or up to twelve per cent if the United States reverses its sanctions against the country. But efforts to build a clean-energy infrastructure are not yet widespread. Last October, researchers at M.I.T. published a study titled “Future Temperature in Southwest Asia Projected to Exceed a Threshold for Human Adaptability.” They found that, by 2070, if worldwide emissions aren’t sufficiently reduced, the Persian Gulf would experience heat waves impossible for many humans to survive. The oil-producing city of Bandar-e Mahshahr, on Iran’s southwest coast, got a preview of that boiling future two summers ago. One day in July, temperature and humidity conspired to make the air feel like a hundred and sixty-three degrees Fahrenheit.

Carolyn Kormann is a member of The New Yorker’s editorial staff.