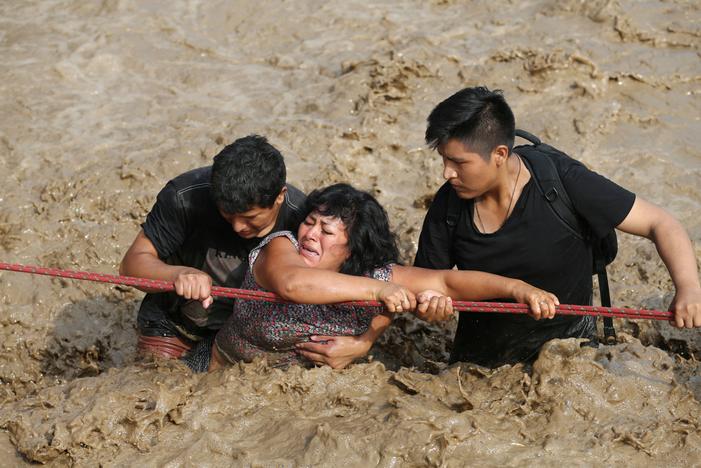 A woman is assisted while crossing a flooded street after the Huaycoloro river overflooded its banks sending torrents of mud and water rushing through the streets in Huachipa, Peru. REUTERS/Guadalupe Pardo

A sudden and abnormal warming of Pacific waters off Peru has unleashed the deadliest downpours in decades, with landslides and raging rivers sweeping away people, clogging highways and destroying crops...

At least 62 people have died and more than 70,000 have become homeless as Peru's rainy season has delivered 10 times as much rainfall than usual, authorities said Friday.

About half of Peru has been declared in emergency to expedite resources to the hardest hit areas, mostly in the north where rainfall has broken records in several districts, said Prime Minister Fernando Zavala.

Peru is bracing itself for another month of flooding.

A local El Nino phenomenon, the warming of surface sea temperatures in the Pacific, will likely continue along Peru's northern coast at least through April, said Dimitri Gutierrez, a scientist with Peru's El Nino committee.

Coastal El Ninos in Peru tend to be preceded by the El Nino phenomenon in the Equatorial Central Pacific, which can trigger flooding and droughts around the world, said Gutierrez. But this year's event in Peru has developed from local conditions.

The U.S. weather agency has put the chances of an El Nino developing in the second half of 2017 at 50-55 percent.

While precipitation in Peru has not exceeded the powerful El Nino of 1998, more rain is falling in shorter periods of time - rapidly filling streets and rivers, said Jorge Chavez, a general tasked with coordinating the government's response.

"We've never seen anything like this before," said Chavez. "From one moment to the next, sea temperatures rose and winds that keep precipitation from reaching land subsided."

In Peru, apocalyptic scenes recorded on cellphones and shared on social media have broadened the sense of chaos.

A woman caked in mud pulled herself from under a debris-filled river earlier this week after a mudslide rushed through a valley where she was tending to crops.

Bridges have collapsed as rivers have breached their banks, and cows and pigs have turned up on beaches after being carried away by rivers.

"There's no need to panic, the government knows what it's doing," President Pedro Pablo Kuczynski said in a televised event, urging people to stay clear of rivers.

In Lima, the capital, classes have been suspended and running water has been restricted after treatment systems were clogged - prompting a rush on bottled water that produced shortages at some supermarkets.

The vast majority of people affected by the extreme weather are poor, including many who built makeshift homes on floodplains that had been dry for 20 years, said Chavez.

"There's no electricity, no drinking water...no transit because streets are flooded," said Valentin Fernandez, mayor of the town Nuevo Chimbote.

Chavez said Peru must rethink its infrastructure to prepare for the potential "tropicalization" of the northern desert coast, which some climate models have forecast as temperatures rise.

"We need more and better bridges, we need highways and cities with drainage systems," said Chavez. "We can't count on nature being predictable."

(This story corrects to remove reference in first sentence to extreme weather in Peru being a sign of a potential El Nino; corrects sixth paragraph to show that Gutierrez said local El Ninos in Peru tend to be preceded, not followed by, the global El Nino pattern and that this year's event in Peru has developed from local conditions)