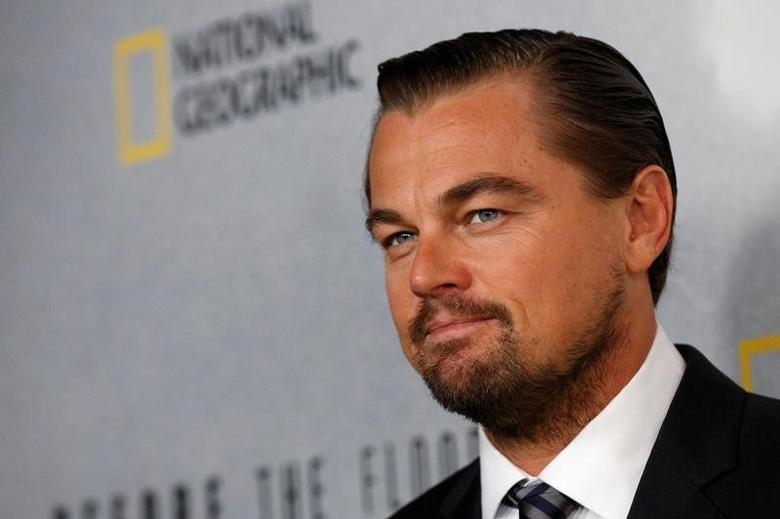 U.S. actor and UN Messenger of Peace Leonardo DiCaprio poses during arrivals for a screening of his documentary film ''Before the Flood'' at the United Nations in New York City, U.S. October 20, 2016. REUTERS/Brendan McDermid

"There are a few, very prominent people that still deny the overwhelming conclusions of the world's scientists that climate change is largely human-caused and needs immediate urgent attention," he told a U.N. awards ceremony on Friday evening.

But "the truth" about climate change has spread like "wildfire", he added.

DiCaprio's comments, as he received a prize for his work as a global citizen, did not refer to U.S. President-elect Donald Trump by name but were a thinly-veiled reference to his views and climate-skeptic cabinet members with oil industry ties.

Earlier this month, 42-year-old DiCaprio and the head of his foundation met with Trump and his team, reportedly arguing that support for renewable energy could create millions of jobs.

Trump has suggested climate change is a hoax and raised the possibility of withdrawing U.S. support for a new global accord to reduce greenhouse gas emissions which most scientists believe are driving up sea-levels and more droughts and violent storms.

"In less than 100 years of our pollution-based prosperity, we humans have put our entire existence in jeopardy," warned DiCaprio, who released his own documentary "Before the Flood" on the impacts of global warming two months ago.

DiCaprio, who won an Oscar this year for playing a fur trapper battling nature's elements in "The Revenant", said his documentary is the most viewed "in history ... (showing) just how much the world cares about the issue of climate change".

But he said the battle to address it is far from over, calling on the world to implement the Paris Agreement on climate change, which came into effect in November, and to "go further".

People everywhere are acting to curb the damage to humans, nature and wildlife from a warming planet, DiCaprio said - from putting a price on carbon emissions, to buying cleaner cars, eating less meat, and businesses vowing to be carbon-neutral.

"To those who may be discouraged by nay-sayers, let me remind you, the environmental awakening is all over the world and the progress we have made so far ... has always been because of people, not governments," DiCaprio told the United Nations Correspondents Association event in downtown New York.

DiCaprio, who has worked closely with outgoing U.N. Secretary-General Ban Ki-moon on climate action, congratulated the U.N. chief for "elevating the significance of climate change to one of fundamental global sustainability and peace".

Without Ban Ki-moon's persistence, the world would never have made so much progress on climate change, culminating in the Paris Agreement sealed in December 2015, DiCaprio said.

The Paris Agreement is "a precious achievement that we must support and nurture", he told his final press conference at the United Nations. "There is no going back," he added.