AFTER EPIC DROUGHT, PARTS OF CALIFORNIA NOW HAVE TOO MUCH SNOW...

Finally. California, which has endured more than five years of epic drought that forced officials to institute unprecedented water use restrictions, now may have too much of a good thing...

A snowpack that in some places is twice the typical amount for this time of year threatens to cause spring flooding, depending on how quickly it melts. This snow continues to be dumped on California, resulting from a parade of relentless drought-busting storms that have lined up across the Pacific like airplanes lining up for take off from JFK Airport during the evening rush. More snow is likely to fall in northern California's mountains this weekend.

SEE ALSO: Rivers in the sky: Why California is flooding

Many of these storms have been embedded within so-called atmospheric rivers, which are narrow highways of moisture in the sky that can bring torrential rain and heavy snow when they plow inland.

The March 1 statewide snow survey found that this has been one of the wettest winters in state history, the statewide snowpack holds an average of 45.5 inches of snow water equivalent, which is 185 percent of the average reading for the date.

Snow water equivalent is the depth of water that would be produced if the entire snowpack melted at once. This measurement is used by water use planners to anticipate water availability during the dry season, as well as flood control officials who need to watch out for the risk of flooding from rapid snowmelt.

According to California's Department of Water Resources, the snowpack in the Sierra Nevada Mountains supplies about 30 percent of California's water needs, with much of this water coming from the spring and summer snowmelt. In at least one location, surveyors were not able to manually measure the snow depth at a measuring site, because there was too much of it.

Precipitation in the Northern Sierra since Oct. 1, 2016, compared with past wettest and driest years. Image: california department of water resources

With such a huge snowpack and already full reservoirs, there is now an increased risk of flooding if the snowmelt occurs too quickly, such as if any storms without much cold air hit during April.

This is particularly concerning given the strained state of California's water infrastructure, with repairs continuing at the Oroville dam, where an auxiliary spillway suffered a structural failure on Feb. 10, causing a hasty evacuation of nearly 200,000 people downstream.

Regionally, there is even more snow, compared to normal, in the southern Sierra — 201 percent of average — than in the northern areas where the anomaly is about 159 percent compared to average. Remarkably, in southern areas the snowfall has come close to the 1983 record amount, which occurred during an extremely strong El Niño event in the tropical Pacific Ocean.

This year's heavy rains and mountain snow have come without an El Niño around, making them even more unusual and unexpected. 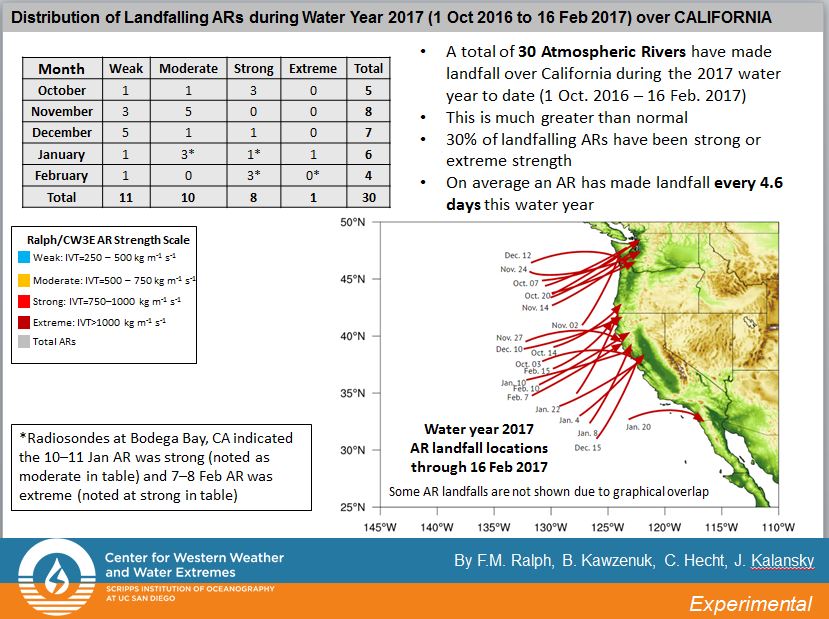 State climatologist Michael Anderson called the winter “historic" in a press release, especially in the central and southern Sierra where elevations are higher and where snowfall has been near the 1983 record amount.

According to the Scripps Institution of Oceanography, there have been 30 atmospheric rivers that have made landfall over California since October 1, which is well above average. Out of these, 30 percent have been rated as strong to extremely strong. 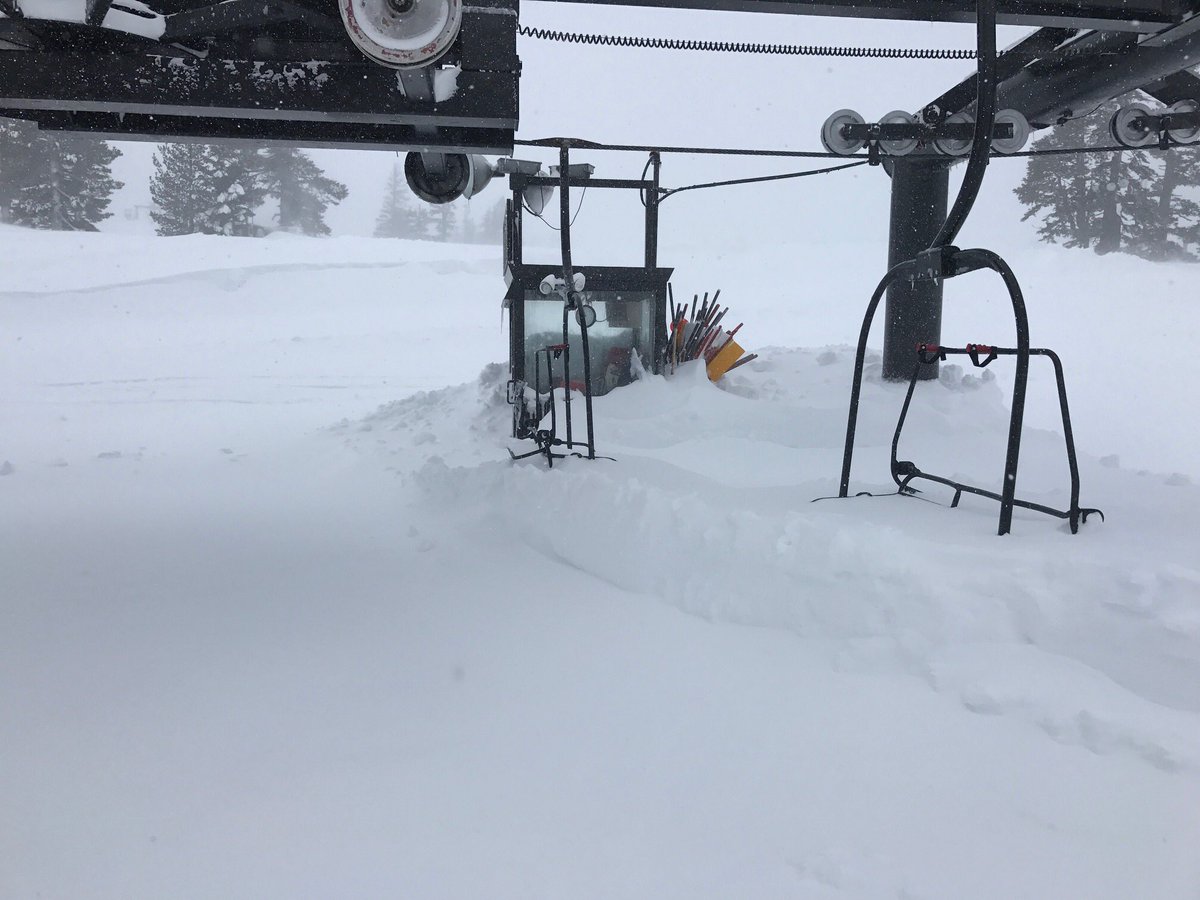 The snow cover is so thick at some California ski resorts that they plan to stay open through July 4, which is a rare occurrence.

Snow has buried ski lifts and ski patrol shacks at Squaw Valley Alpine Meadows resort, with a base snowpack of 21 feet as of Thursday. The resort has received 7 feet of snow since Feb. 17, bringing the seasonal total to a stunning 565 inches and counting.

The annual average snowfall there is 450 inches.

Armando Quintero and Frank Gehrke plunge the survey tube into the snowpack at Phillips Station, near Echo Summit, Calif. on March 1, 2017. Image: AP/REX/Shutterstock

California's droughts often end suddenly with a blockbuster winter season, but even in a state that has historically see-sawed between drought and flood, this year's transition was particularly jarring.

As global warming drives up average temperatures in California, both ends of the scale — drought and flood — are likely to become more severe and potentially long-lasting. The drought that recently faded, for example, was the hottest on record for the state.

Frank Gehrke, who leads the California cooperative snow surveys program, said most locations where his team manually measures the snow cover are well past their typical seasonal accumulations as of April 1. “... We’ve busted through April 1 values pretty much at all snow courses throughout the state,” he said in a press release.

The drought isn't yet completely over, however. While the surface water drought is finished for all but the southernmost portion of the state, there is still a marked reduction in groundwater availability that is affecting many communities and farmers who tap into such resources to water their crops.