AL GORE: BATTLE AGAINST CLIMATE CHANGE IS LIKE FIGHT AGAINST SLAVERY...

Former US vice-president says green revolution is bigger than industrial revolution and happening at faster pace than digital revolution...

The fight against global warming is one of humanity’s great moral movements, alongside the abolition of slavery, the defeat of apartheid, votes for women and gay rights, according to the former US vice-president and climate campaigner, Al Gore.

The battle to halt climate change can be won, he said, because the green revolution delivering clean energy is both bigger than the industrial revolution and happening faster than the digital revolution.

Gore has played a major global role in raising awareness of the dangers of climate change since his 2007 film An Inconvenient Truth and made his comments, among his most outspoken to date, in a recent speech in London. 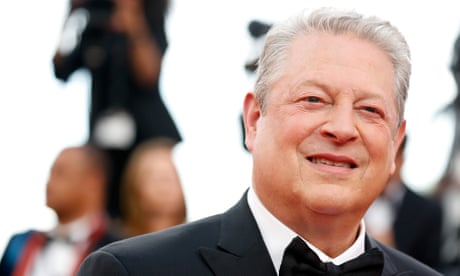 “The climate movement should be seen in the context of the great moral causes that have transformed and improved the outlook for humanity,” he told the Ashden green energy awards ceremony. “It was wrong to allow slavery to continue, it was wrong to deny women the right to vote, it was wrong to discriminate on the basis of skin colour or who you fell in love with.

“When the central issue was thus framed in stark relief because of who we are as human beings, the outcome became foreordained,” Gore said. “We chose what was right, and now in this case it is clearly wrong to destroy the prospects of living prosperously and sustainably on a clean earth when we bequeath it to our children. It is wrong to use the sky as an open sewer, it is wrong to condemn future generations to a lifetime haunted by continual declines in their standard of living, and give them a world of political disruption and all the chaos that the scientists have warned us about.”

Gore acknowledged there was opposition to strong action on climate change, but cited the US civil rights movement as an inspiration: “During some of the bleakest days of the civil rights movement, Dr Martin Luther King Junior was asked by one of his fellow advocates how long is this going to take and he famously answered, not long because no lie can live for ever.”

The former vice president’s latest documentary on the threat to the planet, which opened the Sundance festival, is desultory and surprisingly vainglorious. Read more...

Gore, whose new film An Inconvenient Sequel: Truth to Power is released this summer, said while the moral argument meant humanity would confront climate change, the rapid growth of the low-carbon economy meant it could be successful.

“Instead of beginning in a corner of the UK in a world of 1.5bn people, and then slowly spreading to western Europe and North America, this sustainability revolution is being jump started in rich and poor countries alike in every corner of this world of 7.4 billion people,” he said, likening it to the rapid spread of mobile phones around the world.

Gore is not the first climate campaigner to make a moral argument for acting on global warming. In 2014, Archbishop Desmond Tutu, one of the most revered figures of South Africa’s anti-apartheid struggle, called for action against fossil fuel interests.

“During the anti-apartheid struggle, using boycotts, divestment and sanctions, we were not only able to apply economic pressure on the unjust state, but also serious moral pressure. People of conscience need to break their ties with corporations financing the injustice of climate change,” he wrote in the Guardian.

Gore told his London audience he was optimistic of success, despite the recent US withdrawal from the global Paris climate accord: “No one person can stop the climate movement or the sustainability revolution – we are going to win no matter what President Donald Trump tries to do.”