On Game of Thrones, King of the North and expert brooder Jon Snow has been spending his time trying to convince everyone that an army of frozen dead people are making their way downtown, walking fast, faces past, South-bound...

The problem he’s encountered is that most people are like, “that’s crazy, Jon” and choose to spend their time embroiled in a political bloodbath rather than deal with a problem they’ve never seen or even witnessed evidence of. Former Vice President Al Gore understands the struggle: That’s the frustration he feels when talks to people about climate change.

On Friday, MTV International interviewed Gore about his newest documentary An Inconvenient Sequel and managed to squeeze in a few questions related to the climate-change Game of Thrones fan theory that’s been passed around since 2012. While Gore demurred when asked whether he was Snow in this metaphor (“I don’t want to cast myself in the Game of Thrones. It looks too perilous to me.”), he did say he had heard of the theory and appeared to approve. He suggested that maybe real-world climate defenders would do well to have a dragon on their side but that our reality may be less terrifying than the show’s White Walkers.

“In reality, we have an opportunity to control our own destiny,” says Gore. “We are beginning to win this struggle.”

The theory that Game of Thrones is a metaphor for climate change entered the mainstream in a 2012 article by political scientist Charli Carpenter. He wrote in Foreign Affairs that:

“Environmental disaster, meanwhile, threatens all even as it is ignored by most. Far from being an allegory for immigration reform, the story of the Northern Wall and the forces it holds at bay is about the mistaken belief that industrial civilization can stand against the changing forces of nature. The slogan ‘Winter is coming’ is meant literally as well as metaphorically: planetary forces are moving slowly but inexorably toward climatic catastrophe as the infighting among kings and queens distracts them from the bigger picture.”

In Game of Thrones, “winter is coming” refers not only to general hardships and the long-ass winter that’s a part of their calendar but also to frozen zombie mobs known as White Walkers. Together, these shitty wintry things serve as the climate change element of the metaphor: In 2015, Reuters pointed out, that, even if the show didn’t deliberately make this comparison, the science community has been more than happy to claim it as canon.

Luckily for us who don’t want to live on a doomed planet, some scientists are hopeful that Game of Thrones can be a positive influence on climate change perspectives. Michael Mann, an atmospheric scientist, told Vanity Fair that he was glad the metaphor was clicking with audiences: “Scientists and science communicators need to take advantage of cultural references that allow people to understand the nature of the challenge.” 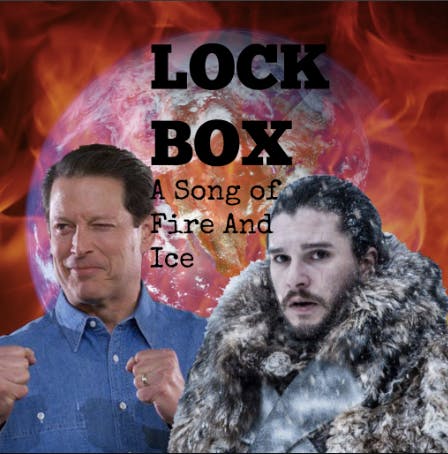 According to NASA, 97 percent of climate scientists agree that climate-warming trends over the past century are due to human activity. This has caused the planet’s average surface temperature to rise by two degrees Fahrenheit, with most of the warming occurring over the past 35 years. The hottest year on record was 2016, and it doesn’t look like this trend will be reversing any time soon.

In an ironic twist, climate change is affecting even the filming of Game of Thrones. When Time interviewed Jon Snow himself, Kit Harrington, earlier this year, he said they had to go to Iceland to film so that they could ensure they’d have enough snow. He also noted that the glacier he had seen there four years prior had shrunk, which gave him a “terrifying” first-hand look at “climate change and global warming.”

“We got there and we were lucky to get the snow we did,” said Harrington, “because in our world, winter is definitely not here.”