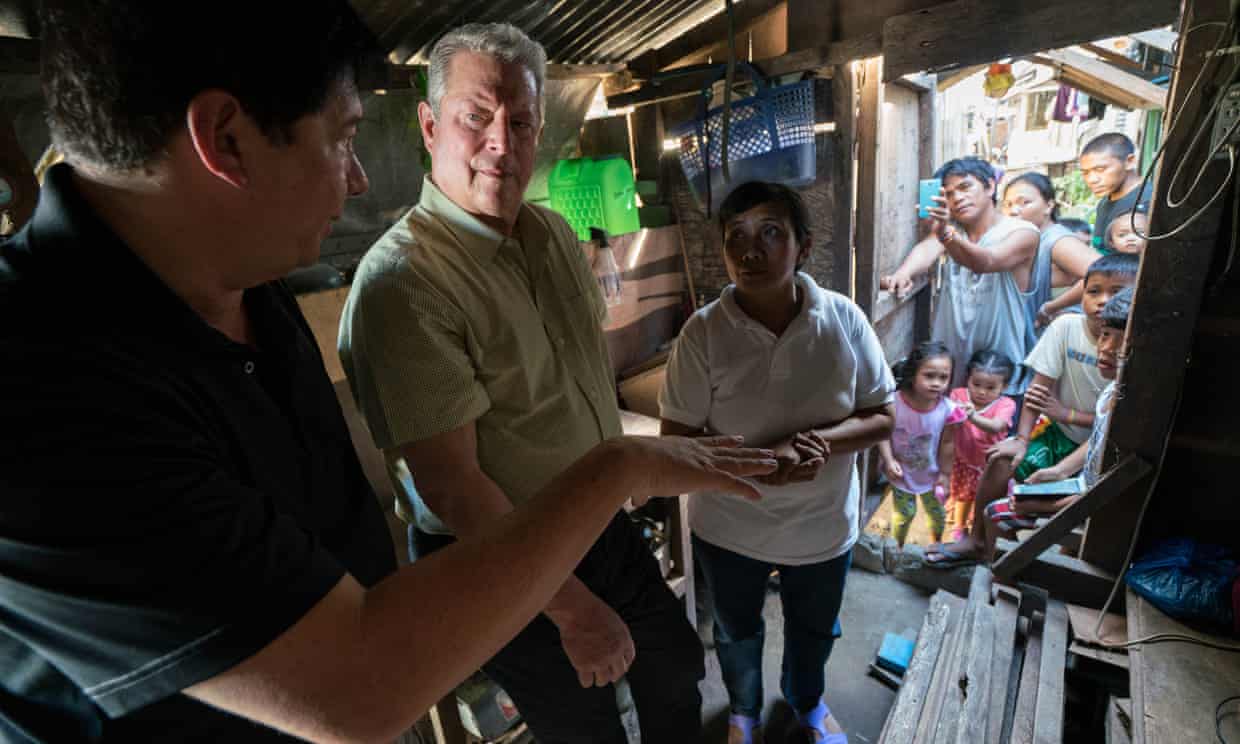 The politics of climate change … former US vice-president Al Gore in An Inconvenient Sequel: Truth to Power. Photograph: Courtesy of Sundance Institute

Politics looks set to overshadow Utah film festival’s 2017 edition, with a march by women film-makers, a documentary on Donald Trump’s presidential victory, and a slew of films on climate change. Then there’s Jack Black’s skit on polka...

The first film on the screening schedule for the 2017 edition of the Sundance film festival is Al Gore’s An Inconvenient Sequel: Truth to Power, a follow-up to his 2006 Oscar winning documentary An Inconvenient Truth. Truth to Power is Gore’s second blast of righteous rhetoric in the cause of climate activism, but the screening has taken on a new urgency as the festival, which starts on 19 January in Park City, Utah will be preoccupied by events 3,000 miles away. The presidential inauguration of Donald Trump takes place in Washington DC on Friday, the festival’s second day, and is likely to cast its shadow over the entire event.

Though the festival itself is not officially involved, the immediate response from festivalgoers – unarguably a bastion of liberal, activist film-making – is the Women’s March on Main, one of the many nationwide sister event to the massive Women’s March on Washington that is due to take place on Saturday, the day after the inauguration. Park City’s version will be led by talk-show host Chelsea Handler, and is due to start at 9am in a pub car park on Main Street. Writing in the Hollywood Reporter, Handler said: “Let’s teach our Predator-in-Chief a lesson that he can’t do anything he wants, and that he can’t trample all over the rights of America’s 162 million women and girls.” Plenty of Sundance attendees will be involved, including film-makers, agents and studio executives, as well as the festival’s director John Cooper.

The politically inflected mood is reflected in the festival lineup, which is noticeably more strident than in recent years. Chief among the offerings is the hot-off-the-press documentary Trumped: Inside the Greatest Political Upset of All Time, a feature film culled from footage shot by the team behind the Showtime TV series The Circus, which covered the entire election cycle throughout 2016, culminating in Trump’s election victory in November.

However, Gore’s film – directed by Bonni Cohen and Jon Shenk – is the centrepiece of wider-ranging effort at Sundance: a sidebar called The New Climate, conceived as a direct riposte to the climate-change scepticism of the incoming president and the new head of the Environmental Protection Agency, Scott Pruitt. Sundance has a strong track record of such stances – a legacy of the environmental activism of its founder, Robert Redford – but this year sees a new sense of urgency.

As a result, the festival has programmed a series of documentaries, covering a huge range of subjects. Chasing Coral grapples with the disastrous decline of coral reefs in oceans across the world, while Plastic China is a study of a recycling facility in Shandong and those who own it and work there. Water and Power: A California Heist aims to unpick the profiteering in California’s water-supply system that is the backdrop to the years of drought in the state. Trophy examines the big-game hunting industry in Africa that is the flipside of animal conservation. Festival goers can even experience what it’s like to be a rainforest tree in what is described as a“virtual experience” put together by artists Milica Zec and Winslow Porter.

Aside from all the politics, however, Sundance is first and foremost dedicated to allowing independent film-makers to showcase their wares, and is often the point of first exposure for a potential crossover hit. In 2016, the big gamble was slavery drama The Birth of a Nation, for which Fox paid $17.5m; that proved to be a loser after the film’s theatrical release and awards run misfired after the resurfacing of historic rape allegations – of which he was acquitted – against its director-star Nate Parker. Although the heady atmosphere of the festival has often triggered bidding wars, few are expecting such large sums to change hands in 2017.

However, a number of films are already attracting interest from distributors: most notably Long Strange Trip, a documentary about underground rockers the Grateful Dead, which has just been snapped up by Amazon. Other likely looking titles include Jack Black comedy The Polka King, about real life polka fraudster Jan Lewan; Newness, directed by Sundance favourite Drake Doremus, about romance in the age of Tinder; and Wind River, a crime thriller directed by Hell and High Water writer Taylor Sheridan.