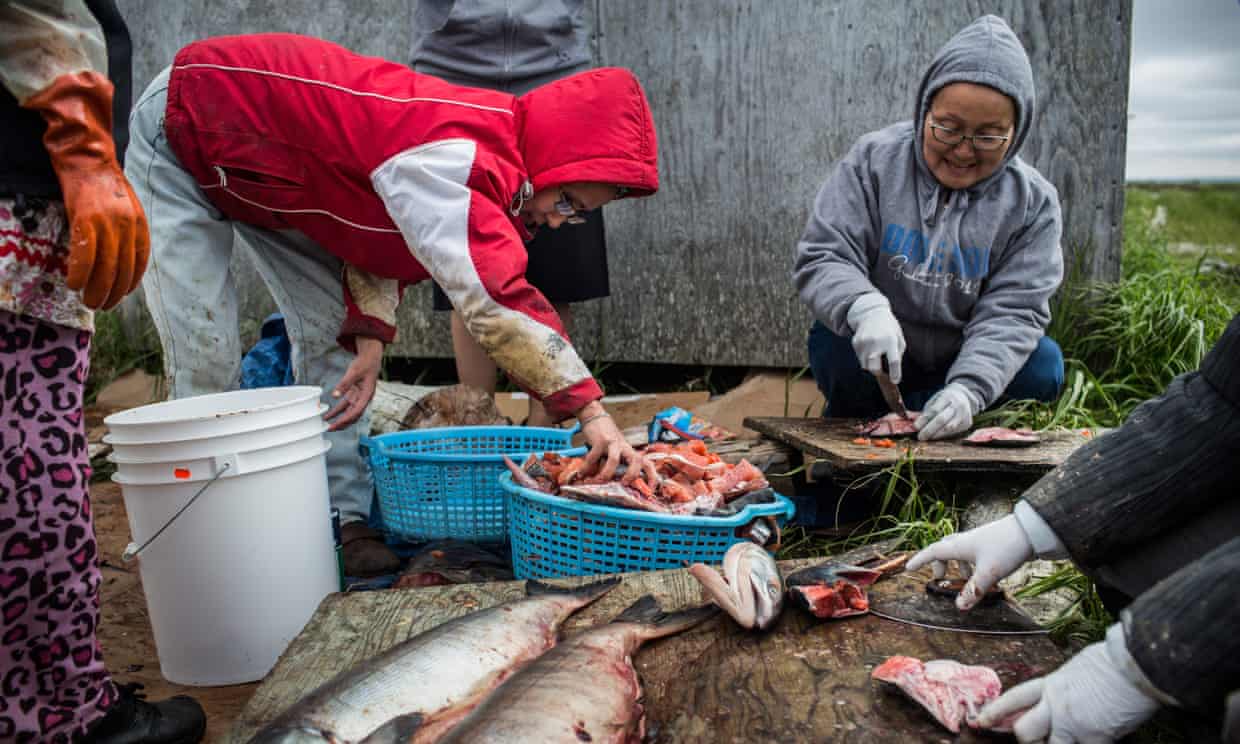 In a year almost certain to be history’s hottest, drastic environmental changes are taking a toll on food supply and even language in Arctic communities...

The extreme warmth of 2016 has changed so much for the people of the Arctic that even their language is becoming unmoored from the conditions in which they now live.

The Yupik, an indigenous people of western Alaska, have dozens of words for the vagaries of sea ice, which is not surprising given the crucial role it plays in subsistence hunting and transportation. But researchers have noted that some of these words, such as “tagneghneq” (thick, dark, weathered ice), are becoming obsolete.

After thousands of years of use, words are vanishing as quickly as the ice they describe due to climate change. The native inhabitants are also in peril – there are 31 Alaskan towns and cities at imminent risk from the melting ice and coastal erosion. Many will have to relocate or somehow adapt. 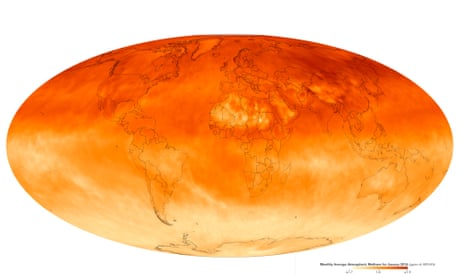 “In December, we normally have waters covered in ice but right now we have open water out there,” said Vera Metcalf, director of the Eskimo Walrus Commission, which represents 19 native communities stretching along Alaska’s western coast. “We are so dependent upon sea ice conditions. It’s our life, our culture.”

Arctic sea ice extent slumped to a record low in November, winnowed away by the warming air, warming seas and unhelpful wind patterns. The region’s 2016 temperature has been 3.5C warmer than a century ago. In some locations the divergence from the long-term average has been an eye-watering 20C.

On 21 November, the decline on the long-term average of sea ice extent for that day was 888,000 sq miles (2.3m sq km) – an area 10 times larger than the UK, but smaller than the long-term average. “Almost every year now we look at the record of sea ice and say ‘wow’, but this year it was like ‘three times wow’,” said Tad Pfeffer, a geophysicist at the University of Colorado. “This year has been a big exaggeration on the trends we’ve already been seeing.”

These numbers have resonance for people who require dependable rhythms in the environment in order to survive. In remote Alaskan communities, the stores sell goods priced to reflect their journey – $20 for a pizza, $15 for a gallon of milk. If you can’t butcher a 1,000lb walrus because there is no sea ice to support both of you, then you might well be left hungry.

“The window of opportunity for hunting continues to shrink,” Metcalf said. “The communities are worried about this because food insecurity is something we are now having to tackle every single day.”

Metcalf grew up on St Lawrence island, a far-flung piece of the US that sits just 36 miles from Russia in the Bering Sea. The island is thought to be one of the last exposed fragments of a land bridge that connected North America to Asia during the last ice age.

In 2013, the island’s two main communities managed to catch just a third of the walruses they normally do. Last year, Gambell, the largest settlement, snared just 36 – down from the 600 it could expect just a few years ago.

Sea ice is further out from land than it once was and is becoming treacherously thin for hunters to traverse. Walruses, which require sea ice for resting and giving birth, often have to resort to heaving themselves on to crowded strips of land. These grand tusked beasts can trample each other to death in such conditions.

“It’s not like the walrus populations are changing, it’s that the climate is changing the conditions,” Metcalf said. “We are trying to plan better but we can’t go out every day and hunt. We can try to adapt and hunt caribou or moose but it’s not easy. It comes at a cost to us.” 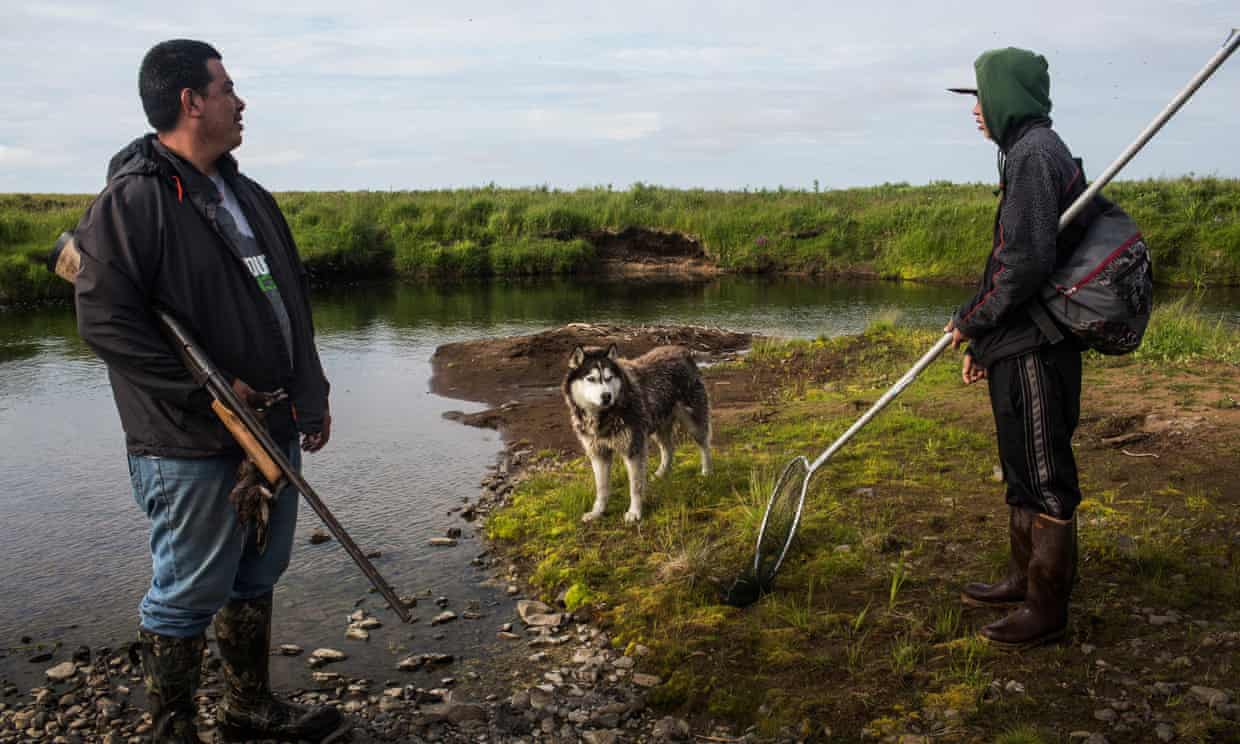 People and a dog hunt for ducks near Newtok, Alaska. Newtok has a population of approximately of 375 ethnically Yupik people. Photograph: Andrew Burton/Getty Images

The Arctic is warming at twice the rate of the rest of the world and there are “early signs” that this temperature increase is speeding up, according to Jeremy Mathis, director of the Arctic program at the National Oceanic and Atmospheric Administration. Mathis moved to Fairbanks, Alaska, in 2007 and even in that time he has seen startling changes – the -40C winters he endured in the first few years have almost completely disappeared.

“For people who live in the Arctic, there is no debate over whether their environment is changing,” he said. “We are seeing a destabilization of the environment in the Arctic. The ice is melting earlier and earlier and coming back later and later in the year. For people here that means a clear impact upon food security and their way of life.”

Frost locked deep in the soils is melting, causing buildings to subside. Communities are seeing their coastlines erode and are increasingly exposed to lashing storms without the protective barrier of sea ice.

Several Alaskan towns and villages are wrestling over whether to fight these changes or retreat to relative safety. Two coastal villages, Shishmaref and Kivalina, have voted to relocate while a third, Newtok, has taken the first tentative steps to do so.

The warmth of 2016 – almost certain to be a global record – has added to the sense of haste. The regrowth of sea ice as Alaska enters winter has been so painfully slow that many communities will be left without a buffer to storms next year. Should a large storm hit, it could prove disastrous.

Such a calamity would at least free up money from the Federal Emergency Management Agency (Fema). The cost of relocating a village of just a few hundred people is around $200m – a bill that neither the federal nor Alaskan government is keen to pick up. Some people in remote communities note, darkly, that a ruinous storm would at least be followed by federal dollars that would allow them to fortify or move.

“These communities need to be moved as soon as possible before a large storm hits,” said Victoria Herrmann, managing director of the Arctic Institute. “There hasn’t been much guidance as to whether they can move or who will pay for it. There are around 230 villages affected by sea level rise and they will all need a plan over the next few years as sea ice continues to retreat.” 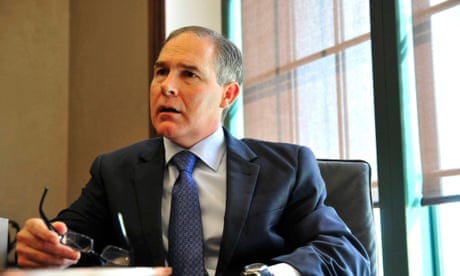 It takes a certain stoic hardiness to live in a place of such frigid cold. But Herrmann said that even those who have had to adapt to changes in the past have found the unravelling of 2016 “very scary”. She added: “What we are seeing is incredible. It’s quite frightening in terms of what it means for the future.”

A solution doesn’t appear imminent. The US has no national sea level rise plan, no system to deal with displaced people. Even as the country’s first climate change refugees emerge from within its own borders, the issue is very much on the sidelines. The incoming president isn’t sure what the fuss is about, vacillating between calling climate change a “hoax” concocted by the Chinese or simply claiming that “nobody really knows” if it exists.

While the politics plays out, wrenching decisions will have to be made.

“Having to move elsewhere is unimaginable,” said Metcalf. “As an elder told me the other day, we are not going anywhere. We’ve been here for centuries. But we may have to consider it, for the sake of our children and grandchildren.”