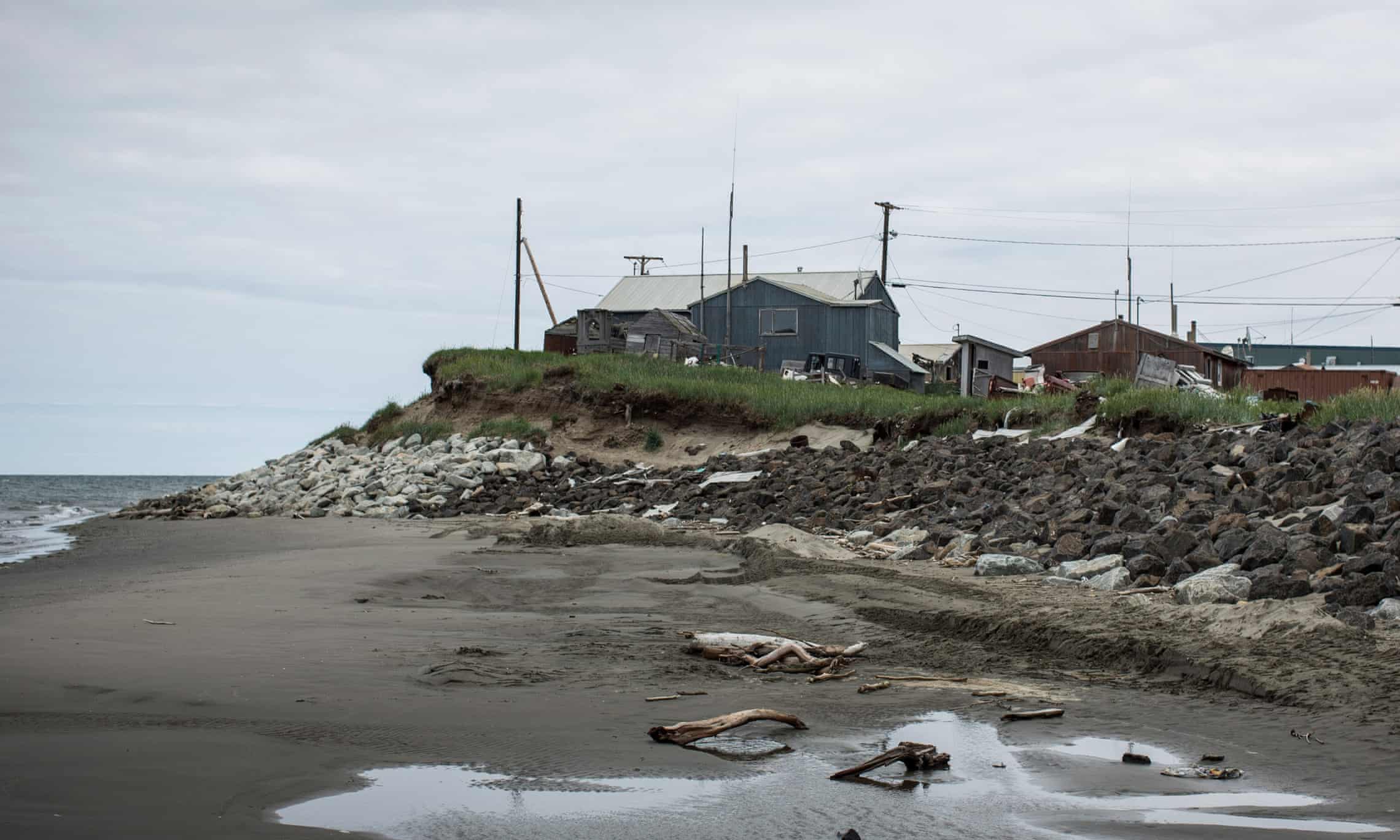 Residents of Shishmaref voted to relocate to the mainland, but in common with other Alaskan towns, there is no clear source of funding to do this. Photograph: Andrew Burton/Getty Images

Communities in danger of falling into the sea say assistance from Washington has dried up: ‘It feels like a complete abdication of responsibility on climate change’...

The US government’s withdrawal from dealing with, or even acknowledging, climate change may have provoked widespread opprobrium, but for Alaskan communities at risk of toppling into the sea, the risks are rather more personal.

The Trump administration has moved to dismantle climate adaptation programs including the Denali Commission, an Anchorage-based agency that is crafting a plan to safeguard or relocate dozens of towns at risk from rising sea levels, storms and the winnowing away of sea ice.

Federal assistance for these towns has been ponderous but could now grind to a halt, with even those working on the issue seemingly targeted by the administration. In July, Joel Clement, an interior department official who worked with Alaskan communities on climate adaptation, claimed he had been moved to a completely unrelated position because of the administration’s ideological hostility to the issue.

“We were getting down to the brass tacks of relocation [of towns at risk] and now work has just stopped,” Clement told the Guardian. He has lodged an official complaint over his reassignment. 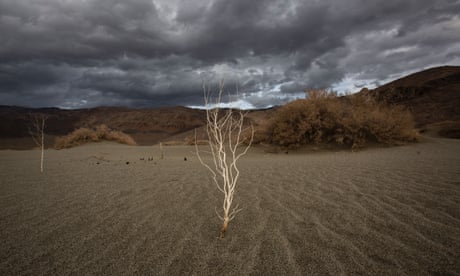 “Without federal coordination from Washington DC, there isn’t much hope. This will take millions of dollars and will take years, and these people don’t have years. I think it’s clear I was moved because of my climate work. It feels like a complete abdication of responsibility on climate change.”

According to the Army Corps of Engineers, 31 Alaskan communities face “imminent” existential threats from coastline erosion, flooding and other consequences of temperatures that are rising twice as quickly in the state as the global average. A handful – Kivalina, Newtok, Shishmaref and Shaktoolik – are considered in particularly perilous positions and will need to be moved.

“It was clear from the start of the Trump administration that there was no interest in helping Alaskan communities, particularly coastal communities, adapt to climate change,” said Victoria Hermann, president of the Arctic Institute.

“There’s now no liaison from Washington on the issue. The biggest loss has been momentum. It feels like the Obama administration was kickstarting something useful but now it has dropped dead.”

Shishmaref, like Shaktoolik and Kivalina, is a town with several hundred inhabitants located on a barrier island. Last August, Shishmaref residents voted to relocate to the mainland but, in common with other Alaskan towns, there is no clear source of funding to do this. Meanwhile, Newtok, which sits on the banks of a river and is losing about 70ft of land a year to erosion, appealed in January for disaster funding to relocate.

The coastal communities are threatened by a confluence of conditions that are making life difficult even for the flinty residents, who are used to dealing with an inhospitable, remote environment.

As the coastal buffer of sea ice retreats, towns are more vulnerable to storms and coastline erosion. Many key structures are built on permafrost, which is also melting, causing the buildings to subside or even crumple completely. And a succession of mild years – 2016 was nearly 6F warmer than the long-term average – is disrupting the patterns of wildlife in an environment where people rely upon the animals they catch for sustenance. 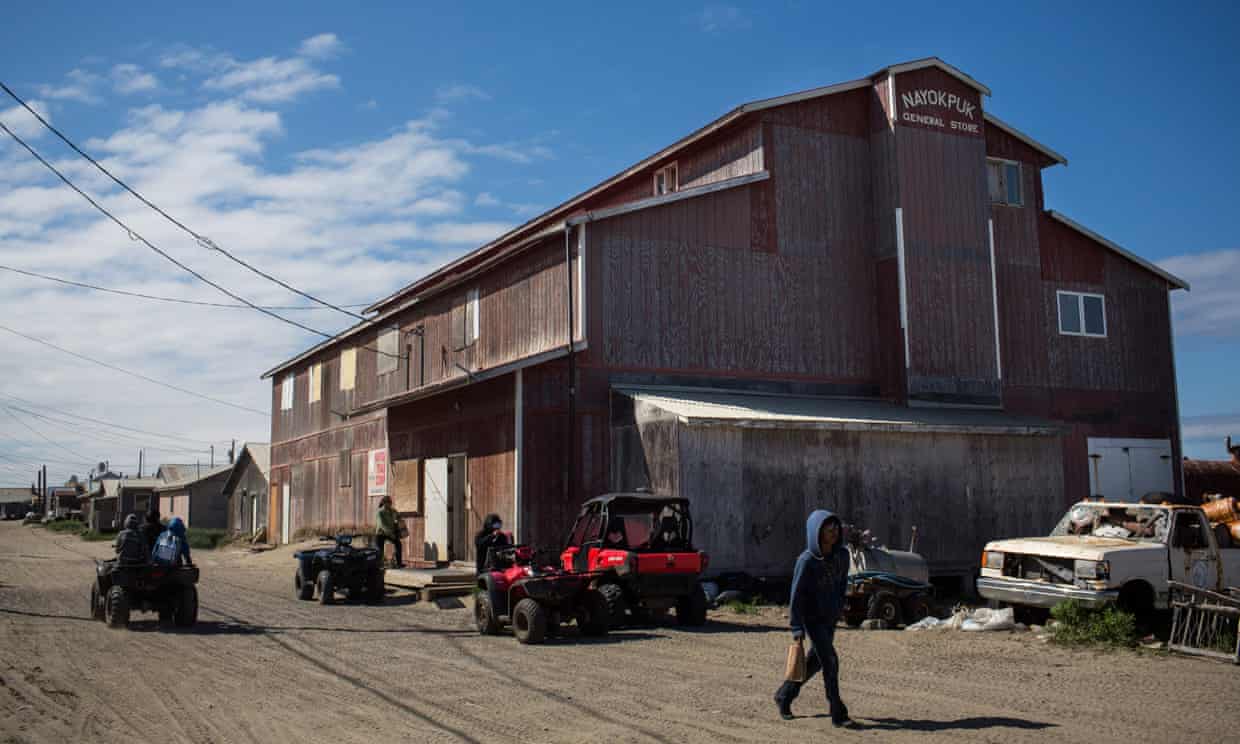 “People are coping with the loss of their history, places where they could reliably hunt and gather food, their burial sites,” said Mike Brubaker, of the Alaska Native Tribal Health Consortium. “It causes a lot of distress. Before you see the physical impacts of climate change, you see the mental impacts.”

The Leo Network, which Brubaker is involved with, has documented a number of recent unusual events linked to climate change, including the sighting of baby squid far outside their normal range by a group of Alaskan school children, altered salmon migration patterns and a lake near the peninsula town of Port Heiden that is on the brink of overflowing due to erosion.

The Trump administration's solution to climate change: ban the term

These environmental shifts are placing strain on the viability of several towns that have found both the state and federal government unwilling to fully commit to the cost of moving them – in Shishmaref’s case, it will take $180m to relocate a town of 600 people to safer ground.

The Denali Commission is working on a strategy to save the towns once disaster finally hits and has already helped fund upgrades to vulnerable infrastructure. But the agency has been earmarked by the White House for elimination, which would further complicate communities’ years-long quest for relocation.

“We have communities here at threat and my peers in DC know this and are asking how they can help,” said Joel Neimeyer, federal co-chair of the commission, who said work would continue at the agency until Congress decided on its future. “At the moment there isn’t a mechanism to fund an entire village location. It’s done in dribs and drabs. We don’t know yet if Congress wants to fund a village relocation.

“This is about how to put a blueprint in place to fund [re]location when disaster hits. If Hurricane Katrina was going to hit you and you had a year to prepare, could you come up with a plan that would shorten the pain and suffering? I believe the answer is yes.”

Port Heiden has already gone through the process of relocation, moving to higher ground to escape a rapidly eroding shoreline. The last resident of the “old” Port Heiden moved away a decade ago and now all but four of the original structures have washed away.

The threat hasn’t completely passed, however. The fuel tankers that supply the town have to sidle alongside a ragged coastline – it’s no longer a port – and use long pipes to dispense their cargo. Further erosion could make this impossible. Port Heiden’s school is also in a vulnerable spot and may have to be relocated.

“I thought at one time it wouldn’t be a problem for us, but we are real flat,” said Scott Anderson, a former commercial fisherman who moved to Port Heiden in 1994. “The change has been rapid. It’s a lot wetter. The caribou have gone away. There used to be a dog and sled team but you don’t see that anymore because it’s rare to have a winter where everything freezes up.

“I imagine these things go in cycles but it concerns the locals. People in Port Heiden definitely think climate change is a real and serious threat.”