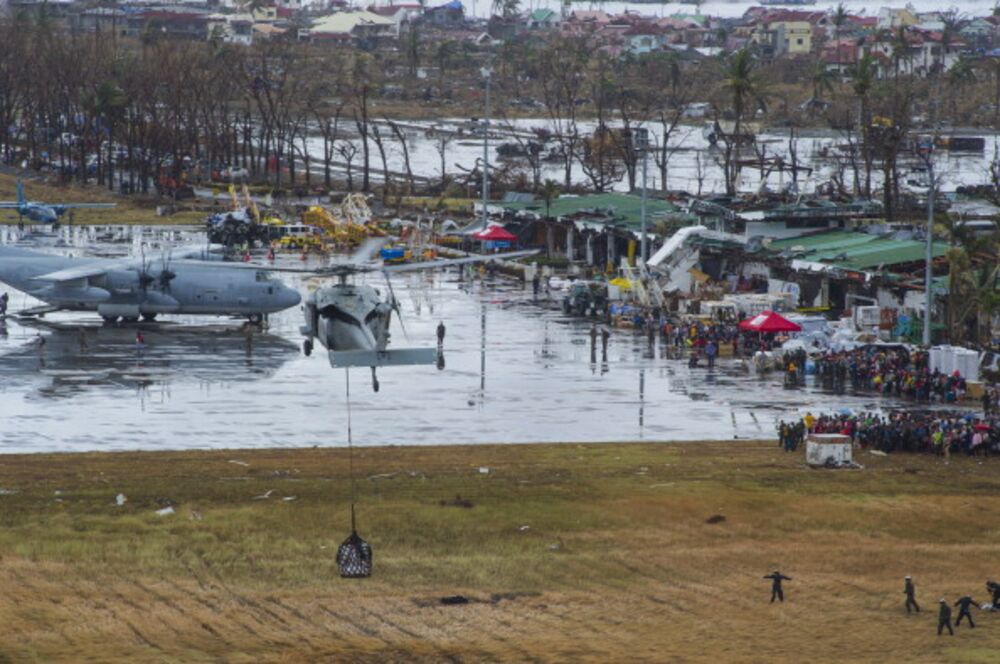 The Trump administration is ignoring a huge threat to national security and global stability...

When the newest U.S. National Security Strategy was released last month, many intelligence, military and foreign-policy professionals considered it a pleasant surprise. It hits most of the mainstream concerns facing the U.S.: the significant challenges we face from China, Russia, North Korea and Iran; the necessity of better homeland security against terrorist attacks; the importance of working with allies, partners and friends; and the need to determine sensible levels of defense spending. I called it “shockingly normal” in a Bloomberg View column.

But it misses the mark in one particularly worrisome area: the threats related to climate change and global warming, which were all but ignored. Early reports indicate that a similar report expected to soon be released by the Pentagon, the National Defense Strategy, will make the same error of omission.

Unfortunately, this is not surprising, given President Donald's Trump's campaign rhetoric expressing extreme skepticism about climate change, the appointment of an Environmental Protection Agency administrator who doesn’t believe man-made global warming is real, and the Trump administration's foolish decision to pull out of the Paris climate accord. By following this path, the U.S. is not only surrendering a position of global leadership on this crucial issue, but it's laying itself open to real security risks in the decades ahead.

What makes climate change so pernicious is that while the effects will only become catastrophic far down the road, the only opportunity to fix the problem rests in the present. In other words, waiting “to be sure climate change is real” condemns us to a highly insecure future if we make the wrong bet. We are in danger of missing not only the vast forest of looming climate change, but the ability to see some of the specific trees that will cause us the most problems. Some of the most obvious and pressing concerns include:

Water scarcity, droughts and resource struggles leading to wars and terrorism. Many studies have confirmed the broad effect of drought and water scarcity in driving violence across a wide variety of countries and regions. Syria, Sudan, Mali and the broad Arab world continue to be battered by rising temperatures and droughts. Resulting famines and economic hardship provide a breeding ground for recruiting disaffected, unemployed youth. You can drop a plumb line from global warming to terrorism and strife in many parts of the world.

Rising sea levels that swamp our ports and coastlines. A brilliant new novel, "The American War" by Omar El Akkad, is set in a 21st-century U.S. where rising sea levels have swamped much of Florida and led to a second Civil War. While this is evocative fiction, the grain of truth is that the seas are rising as the polar caps melt, and over time lower-lying areas of the country -- including some of our most vital military bases -- are at risk of flooding and eventually disappearing.

Arctic melting, rising geopolitical tension and competition. The recent viral video of the starving polar bear whose hunting grounds were literally melting away was heart-rending, but the true geopolitical significance of what is happening in the Arctic is far more significant. As the ice inexorably melts, it will open not only shipping routes, but also vast areas of the ocean floor to hydrocarbon extraction. This will generate geopolitical competition between Russia and the five NATO countries that sit on the so-called Arctic Porch, creating high tension in the “High North.”

Economic impact that undermines our ability to spend on defense. As climate change and global warming hurt the economy by requiring restoration of communities devastated by flooding and the loss of ports and arable land, budgets will be stretched thinner and thinner. Defense spending will be undermined, reducing our overall ability to ensure we are prepared for global military action when required.

Extreme weather. Many experts believe the past hurricane season -- with devastating hits from Harvey (Texas), Irma (Florida) and Maria (Puerto Rico) -- are just a small taste of what is to come. In each of those crises, the U.S. military was forced to divert enormous resources -- hugely expensive ships, soldiers, aircraft and the like -- away from other vital tasks in order to respond. Over time, more such responses will continue to reduce overall defense readiness.

We must address these challenges -- now -- in three key ways.

First, we need to acknowledge the problem. The vast weight of scientific data supports the view that climate change and global warming are real, with immediate effects that will only grow with time. While debate is always valid for any issue of such great policy importance, we must hedge against the extremely high probability that we have a serious challenge and address it with concrete steps -- reducing carbon emissions, investing in renewables, and searching for technologies to reverse damage that has already occurred.

Second, the U.S. must re-take a leadership role. We are still the largest economy in the world, have by far the greatest military capability and -- despite some missteps by the Trump administration -- have the greatest number of allies, partners and friends of any nation on earth. Washington needs to invest some of that international capital in helping create a sensible, balanced and fair global regime. Far better that we stay inside the tent of climate negotiations than try to drive events from outside it.

And third, the U.S. needs to break out of its traditional stove-piped structure and try to address climate change coherently across all agencies and departments. If the White House is going to leave the issue out of the National Security Strategy for domestic political reasons, the Departments of Defense, State and Homeland Security must drive it back into their long-term plans. The federal government is the largest carbon emitter in the country, and simply by undertaking responsible in-house policies to reduce carbon and pursue renewables, it can move the needle significantly.

Both the George W. Bush and Barack Obama administrations understood the reality of climate change and that it poses a major national security threat. If the Trump White House insists on ignoring the inevitable, the professionals at the relevant departments and agencies have to take it upon themselves to develop real strategies, and put real resources, into keeping the U.S. and its global interests secure far into an uncertain future.

by
James Stavridis
January 11, 2018, 7:00 AM CST
This column does not necessarily reflect the opinion of the editorial board or Bloomberg LP and its owners.

To contact the author of this story:
James Stavridis at james.stavridis@tufts.edu

To contact the editor responsible for this story:
Tobin Harshaw at tharshaw@bloomberg.net