AN ENTIRE AIRPORT PAYS NOTHING FOR ELECTRICITY THANKS TO SOLAR POWER... 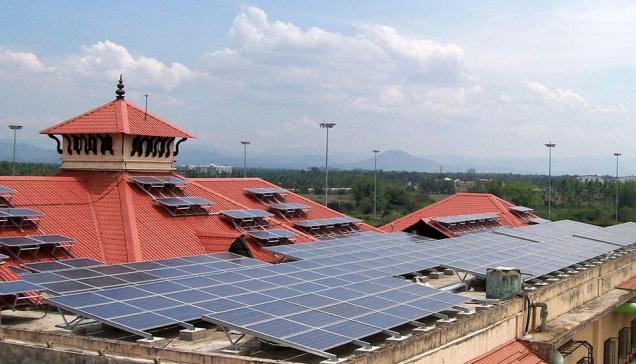 Day by day, solar power is becoming a more viable source of energy for homes and businesses. If you need further proof of this, look no further than the Cochin International Airport in India that is now entirely powered by solar energy and pays nothing for electricity. The airport last year installed a solar power system with a 12-megawatt peak (MWp) capacity that added to its previous installation that had a capacity of 1.1 MWp, thus giving it enough solar energy to run the entire airport...

The whole project cost roughly USD$9.3 million and it was built on a 45-acre piece of unused land near the airport. While the airport obviously can’t rely on solar power to meet all its needs at night, it doesn’t pay anything for electricity because during the day its 46,000 solar panels push all excess power back onto the grid.

The airport estimates it will take under six years for it to recoup its initial investment costs from the project. It also announced plans to double its solar generation capacity in the coming years to 26.50 MWp.

Whether this sort of installation can serve as a model for other airports, of course, is open to debate. Cochin International Airport is only the seventh busiest in India and it was also fortunate to have 45 acres of unused land nearby that it could use for solar power. Major airports in the United States would likely need to have even more open land available to generate the necessary power to keep them running at all times.

Nonetheless, this is a really amazing accomplishment that shows just how much potential solar power offers to both reduce carbon emissions and deliver energy. Read more about this giant solar power project at this link.

To see our most current positions, opinions, comments, agreement or disagreement with this article, and/or possible criticisms related to the subjects or facts raised in the above article, click here.
Then look for those subjects in the navigation links at the top the page.
To learn about more about global warming, climate change or greenhouse gases as well as the causes, consequences, solutions, definitions, facts and tipping points related to these subjects, click here.
To automatically be emailed a summary of the latest news on global warming, sign up for our Global Warming Blog by clicking here. (Put your email address in the Global Warming Blog Subscribe box at the bottom right of the page.)
To sign a critical petition for declaring a national and international global warming State of Emergency, click  here!