ANCIENT BRISTLECONE PINE FORESTS ARE BEING OVERWHELMED BY CLIMATE CHANGE... 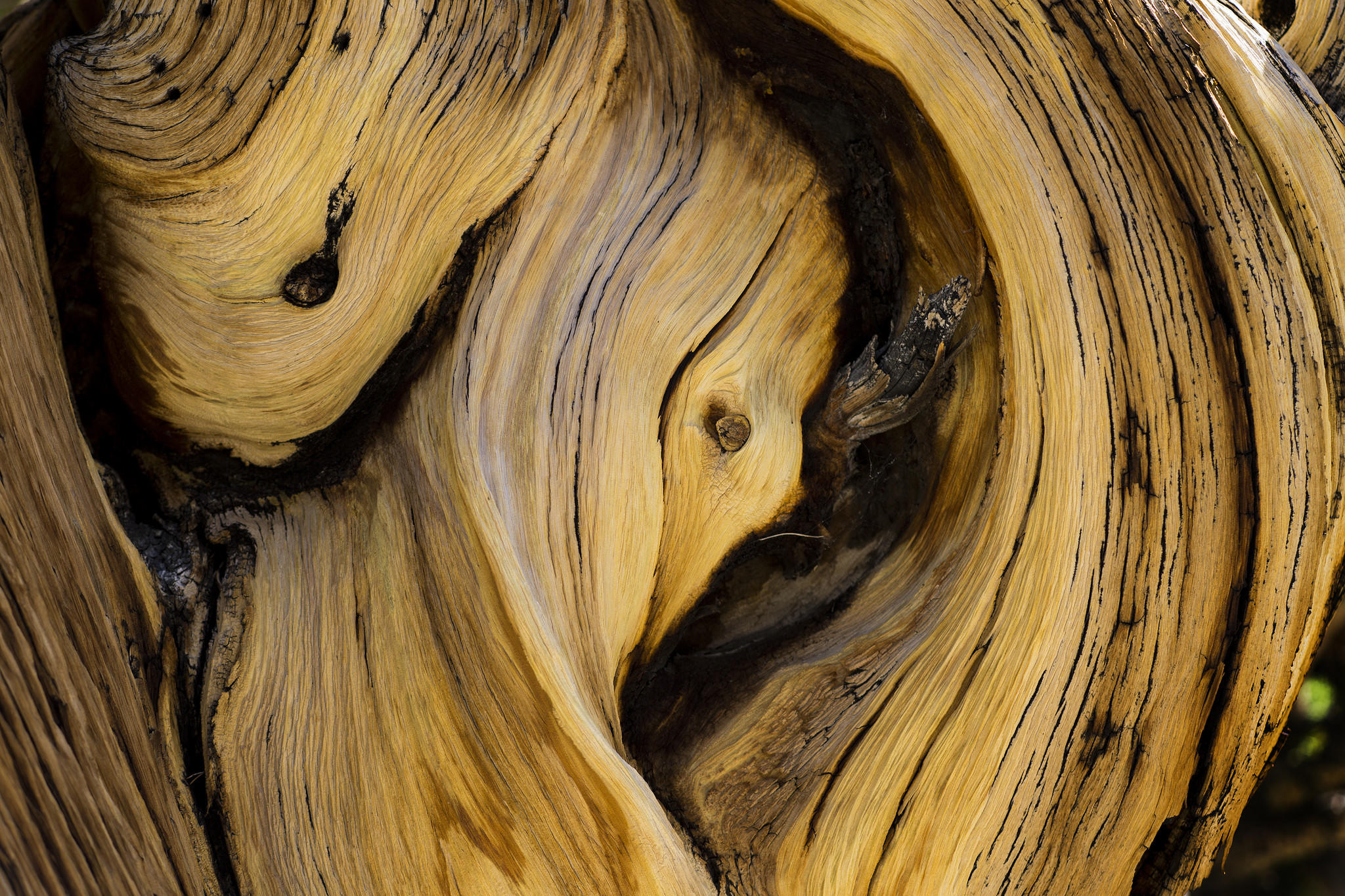 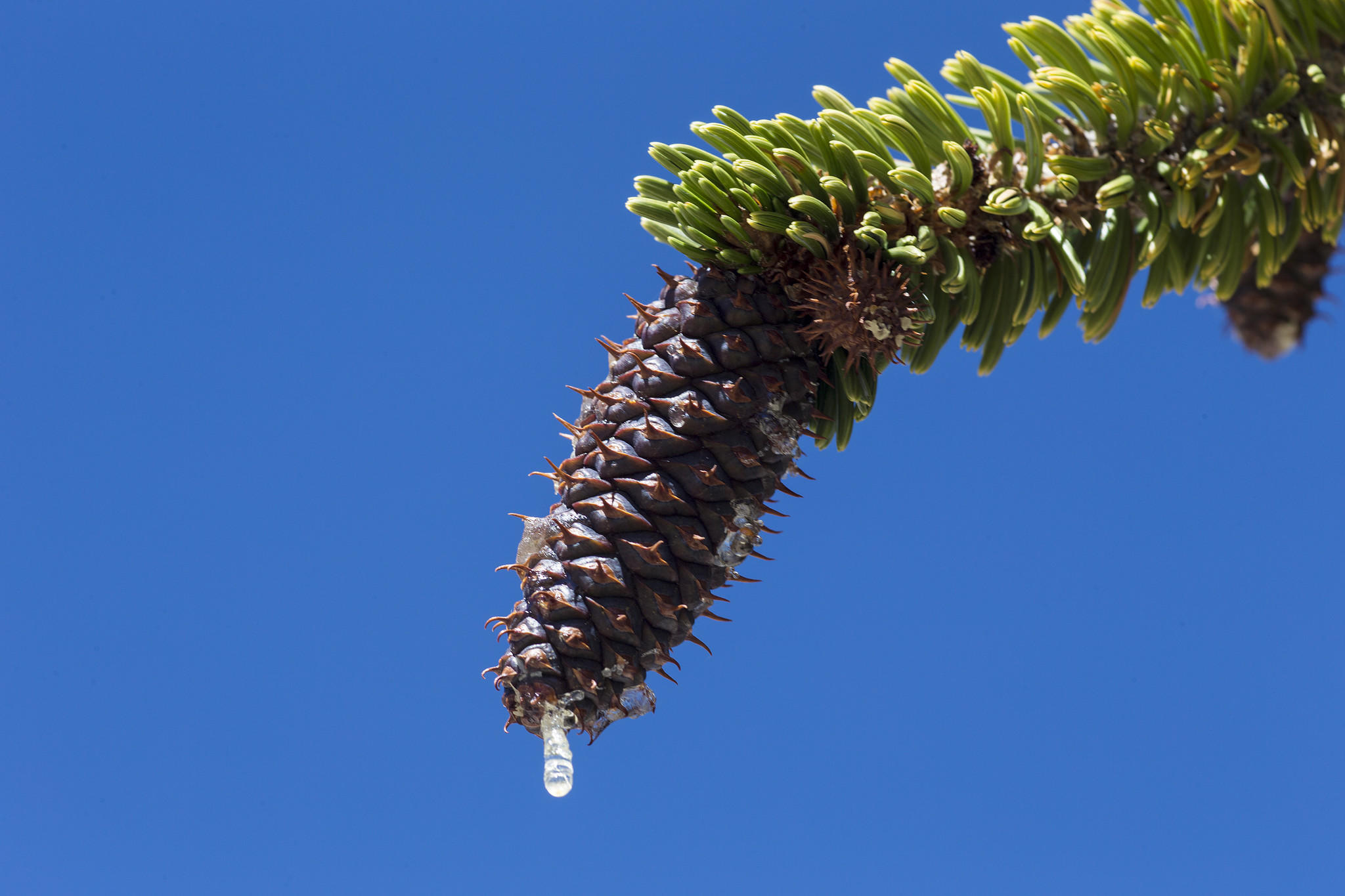 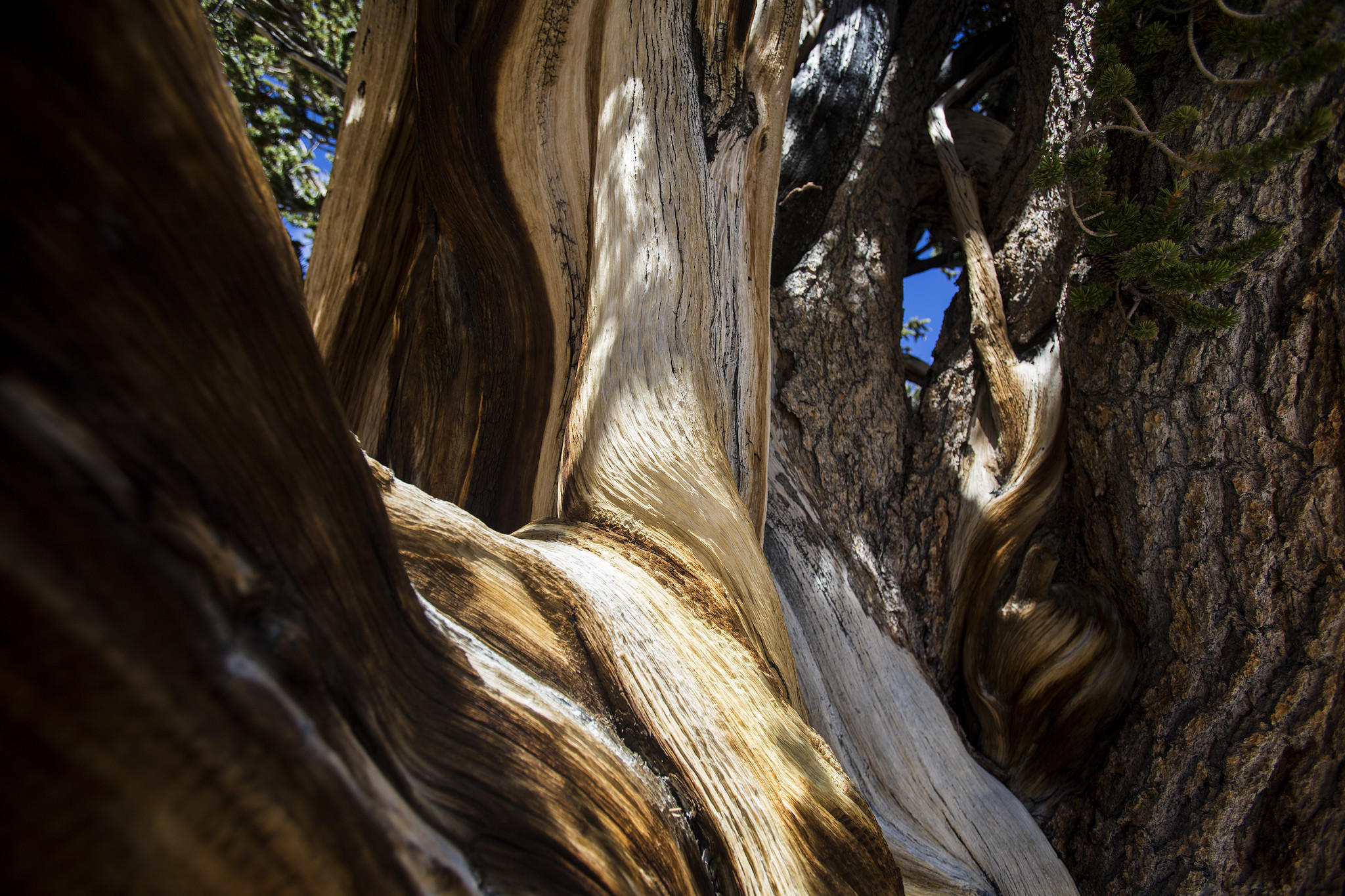 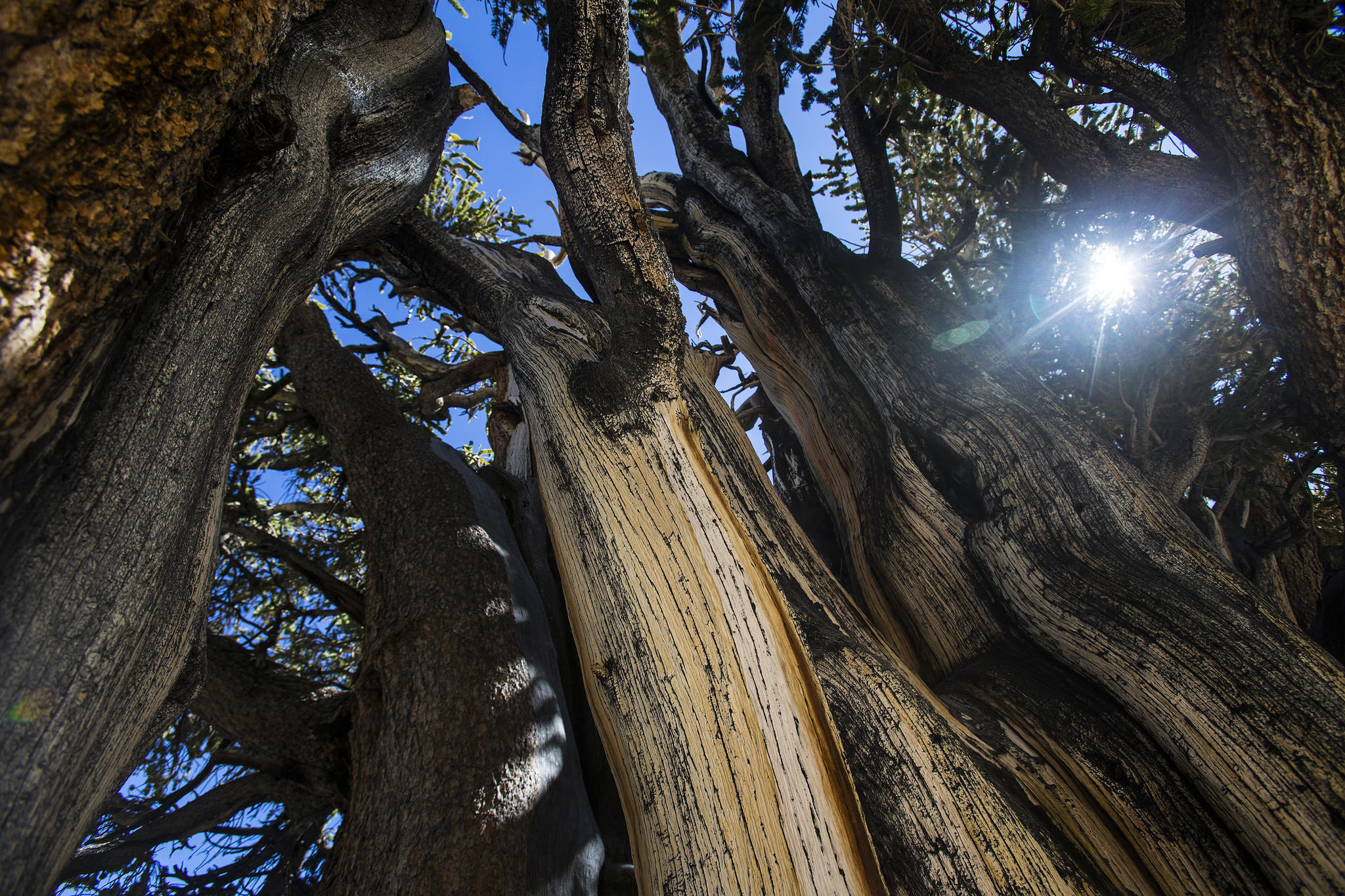 Clockwise from top left: The intricate designs on the bark of an ancient bristlecone pine are nature's artwork. Thick sap drips from a pinecone. The bristlecone pines, some of the oldest trees in the world, are being invaded by younger trees usually found at lower, warmer elevations. (Gina Ferazzi / Los Angeles Times)
For thousands of years, wind-whipped, twisted bristlecone pines have been clinging to existence on the arid, stony crests of eastern California’s White Mountains, in conditions inhospitable to most other life...

Their growth rings provide a year-by-year account of the struggle to survive: It’s a tortuous cycle of dying off almost entirely, leaving only a few strips of bark that then continue to grow diagonally skyward or sideways along the ground.

But the world’s oldest trees may never have experienced temperature increases as rapid as those of recent decades. The climatic changes have triggered a struggle for dominance, in very slow motion, between the ancient bristlecones and the younger limber pines that have been able to charge up-slope as conditions become warmer and wetter.

Scientists know that bristlecone pines will remain standing for centuries to come. But how will they cope with the intrusion of limber pines competing for sunlight, moisture, nutrients and room to grow? Which plants and animals will be first to adapt to niches in the increasingly diverse forests at elevations above 11,000 feet?

To find out, UC Davis ecologist Brian Smithers visited the Ancient Bristlecone Pine Forest in Inyo County on a recent weekday, stopping at a site where limber pines have leapfrogged over bristlecones to start new forests high on the slopes where trees had not grown before.

Bringing his four-wheel-drive truck to an abrupt halt after wiggling up a rocky road for nearly an hour, Smithers trudged into the Patriarch Grove — home to the world’s largest bristlecone pines and hundreds of limber pine sprouts. Now just 15 to 30 years old and a few inches tall, limber pines can live 2,000 years.

Dropping to one knee for a closer look at one of the spiky green trees, Smithers said, “It’s pretty amazing. Limber pines are normally seen farther downslope, not up here where, until recently, it was too cold for them.”

But average ambient temperatures have risen nearly 2 degrees Fahrenheit in the last century, altering the precarious balance of life in the region long dominated by ancient bristlecone pines — regarded as symbols of longevity, strength and perseverance.

“Whenever conditions change, there are winners and losers. And in this case, we won’t know the ultimate outcome for several thousand years,” Smithers said. “But some bristlecone pine forests could face a reduction in range if they’re crowded out … by limber pines moving into their turf.”

Bristlecone pines — named for their bottlebrush-like branches with short needles — are found in other parts of the semiarid Great Basin, which extends from California’s Sierra Nevada east to the Rockies. But the ones found in the White Mountains are the oldest. The slow growers are only about 25 feet tall and expand about 1 inch in diameter every 100 years.

One of the oldest of the bunch is Methuselah, at about 4,768 years old. Its precise location is carefully guarded to avert vandalism.

According to Smithers, who led a study of ancient bristlecone pines published in the journal Global Change Biology, forests of limber pines have been steadily pushing up-slope over the past 50 years throughout the Great Basin. 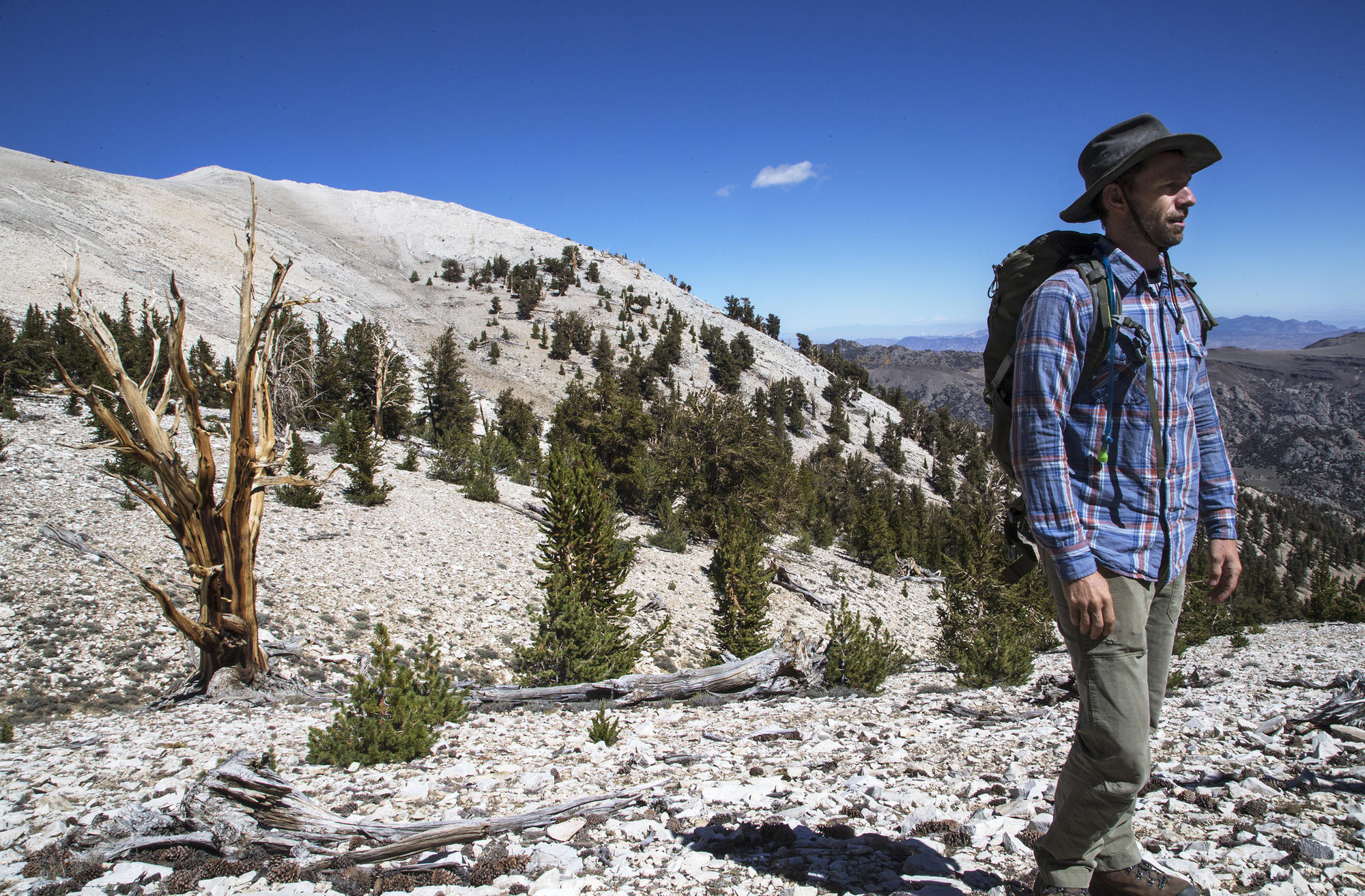 They’ve been able to reach high altitudes with help from Clark’s nutcrackers, industrious jay-like birds that hide hundreds of thousands of nutritious limber pine seeds in soil throughout the landscape each year for food. Some seeds that don’t get eaten are now germinating on desolate mountaintops.

Diana Tomback, an ecologist at the University of Colorado Denver, suggested that if current trends continue, “Clark’s nutcrackers will play an increasingly important role for several species of trees responding to climate change at high elevations throughout the western United States.”

“So the forests of the future will be different than those of today,” she said. “And the ecological shifts unfolding on ridgelines high in the White Mountains could be an example of the changes to come.”