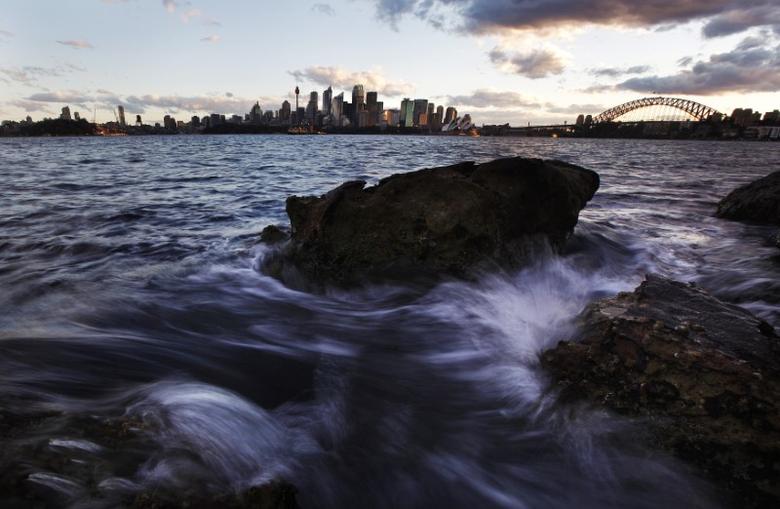 Small waves crash over rocks across the harbor from the Sydney city skyline May 23, 2011. REUTERS/Tim Wimborne

Sea levels could rise by a greater-than-expected six meters (20 ft) over many centuries even if governments cap global warming around current levels, scientists said on Thursday, based on clues from an ancient warm period...

Sea levels have risen by about 20 cms (8 inches) in the past 100 years, with a thaw of ice from Greenland to Antarctica spilling water into the oceans. Many studies have assumed that rising temperatures are a condition for a much faster melt.

A study in the journal Science, however, said sea temperatures in a natural warm period about 125,000 years ago were "indistinguishable" from today, rather than up to 2 degrees Celsius (3.6 Fahrenheit) hotter as previously thought.

"The trend is worrisome as sea levels during the last interglacial period were between six and nine meters (20-30 ft) above their present height," Science said of the findings led by Jeremy Hoffman at Oregon State University.

The experts studied deep seabed sediments, containing chemical signals of temperatures, at 83 sites. It can take centuries or thousands of years for rising temperatures to thaw vast ice sheets.

"The study suggests that, in the long term, sea levels will rise 6 meters at least in response to the warming we are causing," said Andrew Watson, a professor at Britain's University of Exeter who was not involved in the research.

"The good news is that with luck it will continue to rise slowly so that we have time to adapt, but the bad news is that eventually all our present coastal city locations will be inundated," he wrote in a comment.

Anders Levermann, a professor at the Potsdam Institute for Climate Impact Research, said the study was a hint both that ice sheets would melt at lower temperatures than previously expected and also more rapidly.

"It could mean that sea levels will respond faster" to global warming, he told Reuters. He added that there were still many uncertainties about inferring rates of sea level rise from the pre-historic temperatures.

On Wednesday, the U.N.'s World Meteorological Organization said that average global surface temperatures hit a record high in 2016 for the third year in a row and were 1.1 degree Celsius (2.0°F) higher than in pre-industrial times.