Before and after satellite imagery show an iceberg breaking off the calving front of the Pine Island Glacier.
Credit: NASA Earth Observatory

The growing crack in the Larsen C ice shelf is the most dramatic example of change in Antarctica right now. But it isn’t the continent’s only frozen feature changing in a warming world...

Ice around the continent is disappearing as the air and water heat up and the less dramatic breakdowns are just as important to understanding the fate of the ice and the world’s coastal areas.

The Pine Island Glacier on the coast of West Antarctica is a case in point. A massive iceberg roughly 225 square miles in size — or in more familiar terms, 10 times the size of Manhattan — broke off in July 2015. Scientists subsequently spotted cracks in the glacier on a November 2016 flyover. And in January, another iceberg cleaved off the glacier.

Satellite imagery captured the most recent calving event, which Ohio State glaciologist Ian Howat said “ is the equivalent of an ‘aftershock’” following the July 2015 event. The iceberg was “only” the size of Manhattan, underscoring just how dramatic the other breakups have been.

Simon Gascoin, an ice and remote sensing expert at France’s National Center for Scientific Research, noted on Twitter that another crack could be seen just inland from where the iceberg calved off, raising the possibility of another calving event.

In an email, he said that it’s hard to tie these individual events to climate change, but “many studies have shown that Pine Island Glacier is retreating and thinning. That the recent rifting and calving could totally be evidence of an ongoing, rapid disintegration of the ice shelf, mostly due to ocean warming.” 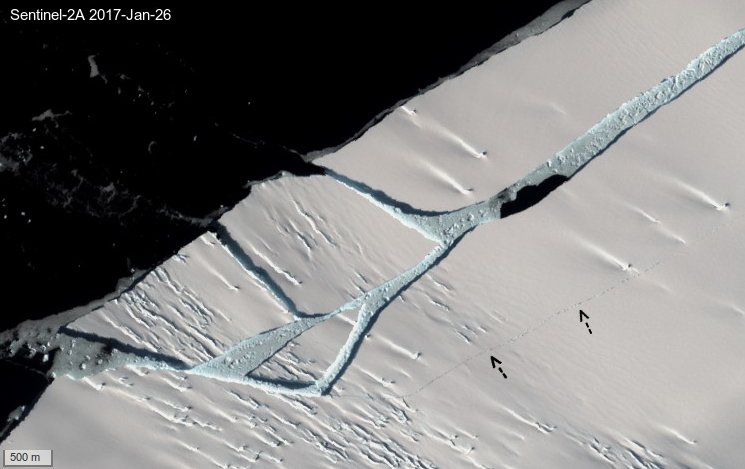 @NASAEarth next iceberg is coming!

The ocean under Pine Island Glacier’s ice shelf has warmed about 1°F since the 1990s. That’s causing the ice shelf to melt and pushing the grounding line — the point where the ice begins to float — back toward land, creating further instability.

Since 1992, Pine Island and some of its glacial brethren in West Antarctica have seen the fastest grounding line retreat of any glaciers on the continent.

Cracks have formed elsewhere on Pine Island Glacier including about six miles inland from the calving front, according to NASA. It’s not time to put the glacier and its ice shelf on death watch like the Larsen C ice shelf on the Antarctic Peninsula, but it’s ice that researchers plan to monitor closely in the coming years.

The glaciers and ice shelves help hold back a massive ice sheet on land. Their failure would send that ice to the ocean, pushing sea levels up to 13 feet higher than they are today. Some research has indicated that the melt of these glaciers is unstoppable, though their disappearance won’t necessarily happen overnight.

Other part of Antarctica from the peninsula to East Antarctica are also in danger of slowly melting out and raising sea levels. Cutting carbon pollution presents the only path forward to stave off the worst impacts of a melting Antarctic.